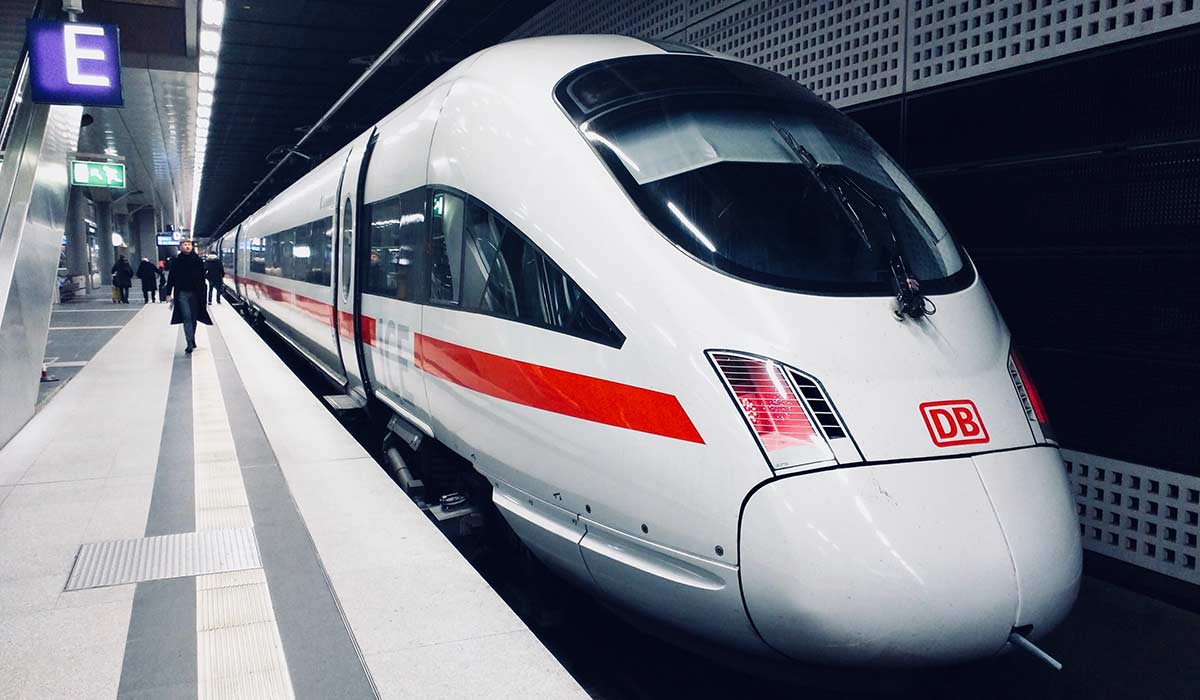 Munich main train station. The sleek, long high speed train was at the platform. I got into one of the cars and found a seat. With no reservation, I wasn’t sure what I’d find. But this was good.

Really good! A single seat by a window. No one beside me. Just the aisle. I leaned back and enjoyed.

Still a few minutes until departure. That’s when doubt set in. Because I noticed a reservation display listing Nuremberg. Meaning this train was going through Nuremberg. My destination was Augsburg. Now the train might go to Nuremberg via Augsburg. But it might also use an entirely different route.

Definitely doubt by now. Certainly didn’t want to be on the wrong train when it left the station.

But if I got up to check the display out in the vestibule, this very nice seat would surely be claimed by someone else before I returned.

In the end, uncertainty won. I ended up going out on the platform to check the big display for there. It showed the train’s final destination and key stops along the way. Right next to a clock, ticking ever closer to departure.

From the sign, I concluded that this was indeed the right train. I hadn’t been crazy when getting on. First stop would be Augsburg. I got back on, just before the whistle blew. One quick look back into the car where I’d been sitting. It was of course full now.

As the train softly started to roll, I walked the other direction, into the next car to find a seat, hoping I wouldn’t have to stand the hour to Augsburg.

We start out on a path in life and hopefully it’s the right one. That leads to us a good, fulfilled life. One we can look back at and be, for the most part, happy with.

But sometimes we get on the wrong train in life as well. We pursue something that looked good and that would surely take us where we wanted to go. Only to eventually find that it didn’t work out nearly as planned.

Maybe wake up one day and find out we ended up where we didn’t want to go at all. Or we supported someone or something that proved to be a disaster. But it sounded good at first.

Amsterdam to Cologne, but not really

I did something like that one time in Amsterdam. I was going to Cologne. Had just missed one train. The next one would be in a few hours. But there was a train for Essen and Dortmund leaving very soon.

Check mental map. Essen is north of Cologne. Not sure by how far, but a lot closer than Amsterdam. Check. Get on train.

Only much later, as the train neared Essen, did I realize how long that journey was taking and also that Essen to Cologne is a lot farther than I remembered.

In trying to get ahead, I actually ended up behind. By the time I finally arrived in Cologne, it was clear I would have been there sooner by waiting for the later, correct train. Major fail.

Deciding the future with today’s insight

The challenge of course is that we make decisions today that will affect our lives long into the future. But we don’t know what the future holds. We only have today’s information.

A friend left the job she’d been in for a good while for another job. That seemed like a good move for her and her career. It only took a week for her to realize it was a huge mistake. The new job wasn’t anything like she’d expected.

At that point she had a couple choices: Stick with it, because it surely will get better. Or swallow her pride, call her old boss and ask for her job back. She did the latter.

Fortunately, her former boss hired her back.

Wouldn’t have ended that well for many of us. And it hadn’t really changed any of the reasons for why she was looking for a new job in the first place. Plus, a lot of the time, we don’t realize that we’re “on the wrong train” until it’s much later in the game. Like me trying to get to Cologne.

So what do we do when we find out that we’re on life’s version of the wrong train?

It may well feel like there’s no choice at all. Which of course there is. Just may not be easy to make a change. More so, if we’ve been going in this direction for some time.

4 ways we react to life

There are 4 ways we can react when we find out we’re on the wrong track in life:

Keep calm and carry on

This is recognizing that my life is going in a direction I don’t want it to go. But I’m not going to throw a fuss about it. I’ll simply accept that this is my lot in life and keep going. Maybe try to make the best of it. Maybe spend the rest of my life complaining about it. But mostly keep on going, because any kind of change would be futile anyway.

It’s saying that things have gone too far already and there’s no changing direction. Ever.

On realizing that life is going in the wrong direction, one response it to become unglued. Panic. Freeze up. Refuse to deal with it. It’s being unable to take any action or make any decision that could help in the current situation or even change the direction I’m going in.

The problem is that life doesn’t stop while I freak out.

Get lost in regret, but change nothing of consequence

Knowing that my life is going in the wrong direction, I choose to focus on how much better things were back before I made that fateful, pitifully poor decision that took things in this direction. Analyze the circumstances back then inside out and over and under multiple times. All to figure out how things ended up in the current mess. And what all I could have, should have, done differently back then.

Because hindsight is always 20/20.

But again, life continues. Still going in the wrong direction. Plus obsessively second-guessing the decisions from back then most likely won’t help me make better decisions (or any decisions) now.

Or when I find I’m in a place where I didn’t really want to end up, I can explore what I can do to change things. It may not be possible to totally change entirely overnight, but real, lasting change often happens one small step at a time. So there’s quite likely something I can do today to help redirect things in a more positive direction.

Getting to that point, includes realizing that the future is far more important than the past. The past is already written. But we can shape the future. It’s being written fresh every day.

For a train trip, I can check route and timetable ahead of traveling. Plan things out. All to know I’ll end up where I want to go, when I want to be there.

Life on the other hand is quite uncertain. Which makes it more important to choose wisely. Since we can’t peek into the future and know how things will play out for sure, we must use everything we know from that past and current state of things. Then make the best decision we can.

It’s also essential to keep checking how things are going. Is life’s trajectory reasonably aligned with the choice I made back there or am I going off course?

Because the last thing you or I really want is to wake up one day, years down the line, and find out that we pursued all the wrong things.

True, I can make changes now for the rest of my life, but at the same time, what has gone by can’t be reclaimed. The years the locusts have eaten.

So frequent checking that we’re still doing okay and course correcting if we’re not, will help us from one day ending up in a place we totally didn’t want to go.

The woman on the train to…

It didn’t go so well for the lady I (and several other travelers) shared a train compartment with, from Copenhagen to Hamburg and then on towards Cologne.

The trip to Hamburg was uneventful. It was evening by the time we got there. A few people in the compartment got off. Someone else came in. The woman ignored the long stop.

Then the train took off again, rushing into the dark night. We were well away from the big city when the conductor came through. He checked tickets and took a long look at the lady’s ticket.

“Your ticket is to Hannover. You needed to change trains in Hamburg,” he said. “This train is going to Bremen next. You are on the wrong train.”

The lady got on in Copenhagen. From there until Hamburg, it was the right train. But she needed to change to another train in Hamburg to get to her destination. By now she was far off the correct path and would definitely not get where she was going that evening.

She was not happy and let the conductor know so in no uncertain words. Because somehow it was his fault.

Thing is, he was not an unreasonable man. He might have been inclined to let her just ride along to Bremen, the next stop.

But as the verbal abuse piled on, he pulled out his ticket book and insisted she pony up for a ticket from Hamburg to Bremen. After all, she had no ticket for the train she was on!

Long after the conductor was gone, she continued muttering and no-one in the compartment was sad to see her get off at Bremen. Though I wonder if she ever made it to Hannover.

That’s another thing about life: We can be on the perfectly right track for a long time. It’s easy to think that things will go on like this forever.

Except there came a point in life when I needed to make a change and didn’t. And now, even though everything around looks the same, I’m not where I should be.

“If you board the wrong train, it is no use running along the corridor in the other direction.”

Am I at that point ready to accept change and take appropriate action?

Or am I the lady in the corner, muttering about everybody else’s fault, while going further and further away from where I should be in life?