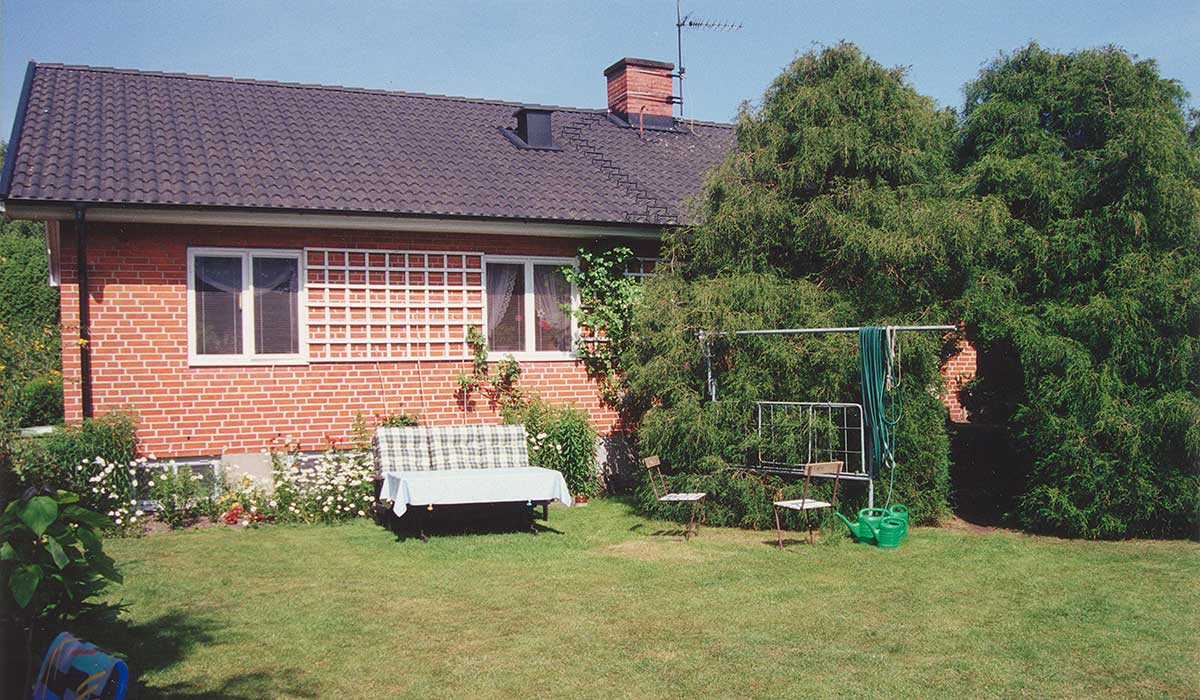 Growing up, I wanted to build a house. Not just the requisite tree house or small play shed. But a real house to live in.

I have no idea where the idea came from.

My parents lived in a house that my dad bought from the original owners, who had it built in the late 1920s. Dad’s approach to anything house related was to call the local plumber, electrician, contractor or handyman. Home repair was just not one of his strong suits.

So clearly didn’t get the idea from him.

The bricklayer built a house

But Sven, my cousin Gertie’s husband, built a house for his family. That was impressive. (Several of my cousins are about 20 years older than me, so already had families when I was still a kid.)

Sven’s house looked every bit as neat, tidy and well constructed as all the other houses in the neighborhood. Of course: He was a skilled bricklayer, carpenter and builder. It’s what he did for a living all his life.

I can only imagine what that was like: Work hard on houses for others all day long and then in the evening go out to the house you’re building for yourself. More manual labor. I figure he slept well at night.

“Building your own home is about desire, fantasy. But it’s achievable; anyone can do it.”

A new house in a new subdivision

The houses on the street I grew up on were all built in the first decades of the 20th century. But across the main road, a new subdivision was growing up. Many of my friends lived in those much newer houses. And more houses were being built there. Which is really exciting for boys: Heavy machinery, construction and power tools. Oh my!

One of the building sites caught my attention. Most were traditional contractor projects. Not this one.

There was a father-son carpentry shop in town. Each day after work, the son would walk across town to his lot in the developing subdivision. I’d see him on the main road and knew it was time to follow. Because he’d be up at the construction site, building his new house well into the evening.

I felt a connection because his name was also Claes. And he let me help. I was there when the hole was dug in the ground, rebar went in and concrete block basement walls were put up. Then the first floor walls. You’d think that a carpenter by trade would do stud construction. Not Claes. He was going for solid. Outer and inner walls were all brick and block. Solid construction that will stand through pretty much anything.

Just by hanging around, helping out here and there, I learned so much about the process of building a house.

Now, decades later, his daughter lives in the house, which has been added on to for more space. But everything was built so solidly it will stand for generations.

“When we build, let us think that we build forever.”

In grade school I’d often bike over to my best friend’s house. His parents owned an apple orchard and greenhouses. But the really cool thing was their house. Swedes generally are a traditional lot. Their house was not. It was architect designed, custom built and made the news when originally constructed. It was single level, with no basement and a flat roof. Plus south-facing walls almost entirely of glass. Very mid-century modern.

The interior was an open floor plan. Pretty much unheard of in Sweden at that time. I loved visiting there. The house was something like I’d later see in the Ideas in Houses features in LIFE magazine.

Maybe that house was what got me interested in architecture and what a house could look like.

As a teenager, I figured that one day, I’d need a place to live and would build my own house. That I’d design. I drew many floor plans and elevations, exploring what I liked.

The carpenter built a house

Then I went off to college. Visited friends in Illinois: Ron and Betty. Ron was a carpenter. And he’d built his own house. Which is probably why the floor plan seemed so perfect. Ron was still finishing a room and adding features.

At the same time, the house felt like the family had lived there forever. A very pleasant, welcoming home.

Betty told me they started with a set of purchased plans that they customized to make the house just perfect for them. It worked extremely well as they raised their family in the house.

Eventually Ron and Betty retired there. I visited Betty several years after Ron had passed away. I could sense the comfort it was to her to be able to live in this house her husband had built for her. Just the way she and he wanted it.

Truly a house to live a lifetime in.

“A building is not just a place to be but a way to be.”

In college, one of my friends from church was a carpenter. Who built houses. I have no idea how many houses he built over the years. He and his wife would live in each house for a few years. Then sell it and build another.

Another friend from church built a truly one-of-a-kind house, using a lot of collected and used materials. Not sure if it was economic necessity or a desire to recycle. Maybe a bit of both. He and his family moved into the house as soon as there was a shell and a room or two were mostly livable. Eventually finished it into a very nice home in an attractive area.

I wasn’t surprised at all when my father-in-law, Walt, declared that he was building a house. As a pastor, he’d already managed several church construction projects through the years. And built a home for his family  years earlier. Now it was time for a new home. Diane and I got to follow the construction progress first-hand every time we visited.

There’s just something special about watching a new house take shape. From outlines on a floor and barely-there-walls to rooms becoming more defined and finished. But already, the imagination can leap forward to what this place will look like when it’s all finished and actually lived in.

“Every great building once began as a building plan. That means, sitting in that building plan on the table is a mighty structure not yet seen. It is the same with dreams.”

So how did things turn out for me and house building?

I didn’t build a house

That doesn’t mean I haven’t done lots of construction and remodeling on those houses. Plumbing. Electrical. Framing and drywall. Flooring.

Installing a bay window and a new exit door. Cutting out and installing an egress window from our basement in Iowa, to comply with code for using the basement for sleeping.

I did build a combined potting shed and play house there as well. Still standing. Plus totally redid a patio area into a great outdoor space.

I re-roofed our current house, including getting down to bare plywood (replacing some seriously bad sections).

So in a way, I have built a house. If you put all those improvements together, they would make for an almost complete house.

I even went on a missions trip one time to help turn an old city house into a church home for an Arab church in Brussels, Belgium.

In all of it, the most fun memory is of the time I needed to replace drywall in our living room. Stephanie was grade school age and mighty thrilled when I gave her a hammer and told her to have at it, knocking out the drywall.

“You can design and create, and build the most wonderful place in the world. But it takes people to make the dream a reality.”

Lessons from not building a house

I had a desire to build a house. That didn’t happen, but along the way, I learned the skills anyway. So I could take on any number of projects on my own houses and to help others. In the end, nothing at all wasted.

It has also given me a great appreciation for well constructed housing. And a realization that many brand new houses are anything but. After all, the builder is going to sell it and move on to other things. Not going to live there for years to come.

The houses I saw constructed by people who were going to live in them, on the other hand, were all extremely carefully designed and built. Meeting or exceeding code. It wasn’t just a building project. It was the place where the builder and their family were going to live. In some cases the rest of their lives.

Would I have picked up those construction skills if I hadn’t been around people who built their own houses? I doubt it. At least not to that extent. Because I’d have been too timid to try. Thinking the project too big.

But I saw what Sven, Claes, Ron and Walt did and concluded that if they could build a house, then I might be able to do a remodeling project. Even put a new roof on the house.

All because I had good examples. Mentors. Even though none of them knew it at the time. They taught valuable principles just by doing what was right for them.

Maybe that’s the biggest insight: We never know when we’re inspiring someone around us to learn new skills or expand their understanding of what’s possible.

One definition of an expert is that he or she knows something that seems self-evident, even commonplace, to them. But that is a game changer to someone else.

I’m thankful for the game changers in my life.

“We shape our buildings: Thereafter, they shape us.”

Has there been something you always wanted to do? Thought you’d do at some point in life? How did that work out?

What do you know (that seems commonplace or self-evident to you) that could be a game changer to someone else?

How can you find ways to share that to encourage others?

4 thoughts on “I wanted to build a house”