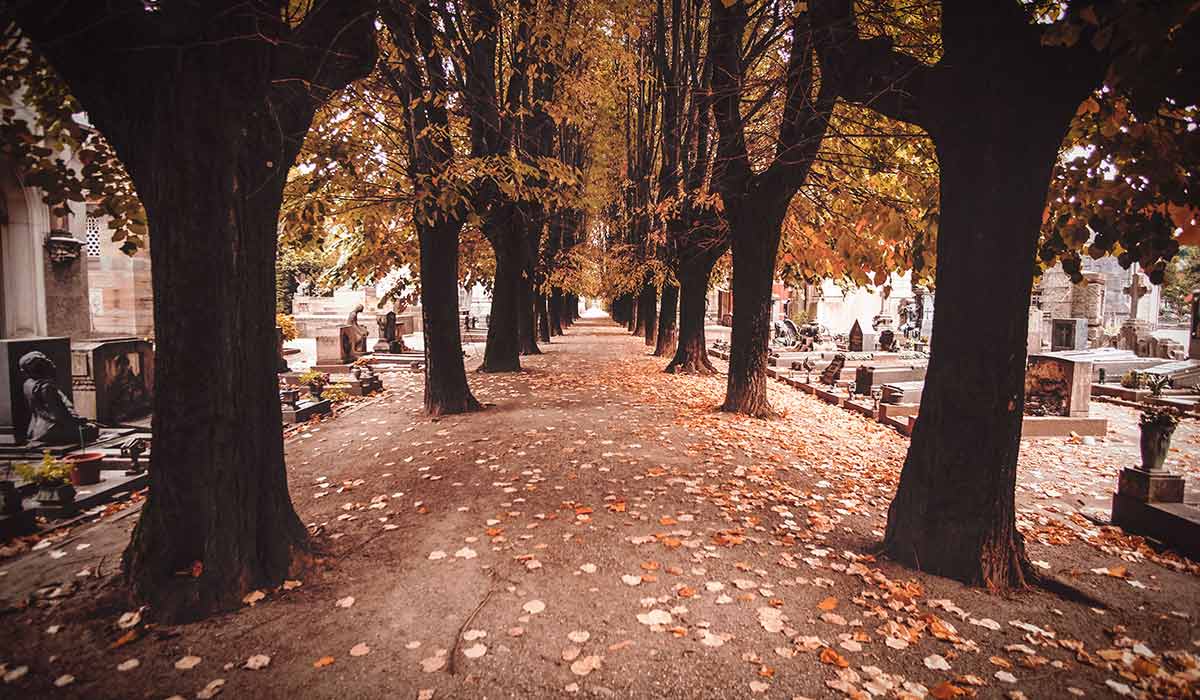 Carensa would so have liked to catch up with Veronica one more time. Maybe then she would have been able to break through and make some difference in her life.

At the same time, a small voice in the back of her mind kept telling her that most likely it would have been like any of the other times they’d connected over the years: A crisis in Veronica’s life. Carensa trying to be supportive and helping her change. It would have been a fleeting meeting. One where Veronica took off as soon as the conversation got too close for comfort.

Because that was how things went. Not just once. But pretty much every time they got together.

Now here she was, in a small cemetery in Paris, France. The rows of graves shadowed and surrounded by tall, ancient trees. Encircling the cemetery were streets and typically Parisian apartment buildings from 1800-something. Belle Epoche and all that.

Clearly not an area she would just have happened to wander into as a tourist. Yet here she was, looking for a familiar name on a headstone.

It would not be an old one, overgrown with moss. Though there were plenty of those. The one she wanted would be just a year or so old. There weren’t many of those in this cemetery. But somehow it still made sense that it was in here. Veronica always had a flair for pulling off the things other mere mortals might only dream of.

She walked down path after path, surveying the graves on either side. The busy traffic on the streets out there, on the other side of the tall trees edging the cemetery formed a contestant backdrop. One that she was not really aware of anymore. All focused on finding that tombstone.

Finally, there it was. Plain, polished granite. The dark surface still reflecting the surrounding graves. In simple, unadorned letters she read:

There is nothing new except what has been forgotten

Only as she stood in front of the headstone, did she realize she had fully expected the stone to just read “V”. Because that’s what Veronica went by all those years. At least since well before the first time Carensa visited her here in Paris, back in the summer of ’76.

Back then, V was a grad student at the Sorbonne. Working on a thesis, researching the life and times of Marie Antoinette and aspects of the French Revolution. Carensa didn’t fully understand it then and it hadn’t made any much more sense later on.

She figured that the quote on the headstone was something Marie Antoinette said. Or might have said. At least it wasn’t the bit about letting them eat cake. Although, Carensa wouldn’t have been surprised. Somehow that would have fit with who V was.

Standing here at the grave site, she wondered why she had come. V had been her strangest friend by far. In so many ways a diametrical opposite of Carensa.

V overflowed with joie de vivre and was unstoppable, perennially full of ideas. You definitely wanted her around when planning a new venture. She had all the great ideas. Because she didn’t just think out of the box. She lived out of the box. Much of the time clearly in an alternate dimension, unique to her.

But it was also V who would disappear with no warning when things got too demanding. When it was time to turn those wonderful plans into reality. More than once they’d brainstormed some great project together. Only for V to then disappear. Leaving Carensa holding the bag. Having to pull it all off by herself.

Then inevitably, a month or six months later, V would reappear. As if their last conversation had been just yesterday. Except it hadn’t. And never with any explanation or even word about why she’d been incommunicado for the time in between.

Carensa always felt that if she pressed, asking for an explanation, V would just disappear again.

There was even that time in Chicago. Carensa was visiting her friend Paul there, exploring if she could imagine a life together with him.

V had shown up without advance notice. Just flew in to O’Hare. V claimed a crisis of epic proportions. Her life in Paris was over. The French Revolution, Marie Antoinette and V’s boyfriend Jean-Claude all be hanged. V swore that she was never going back.

Except a couple mornings later, Carensa woke up to find V gone to the airport, heading back to Paris.

That affair had sparked the first major fight between Carensa and Paul. Because Carensa insisted that V could change and that she could reach her. Paul equally insisted that V was not very likely to change at all and Carensa was actually enabling her by always being there when V decided she wanted to rekindle the friendship.

Paul and Carensa eventually made up. They went on to get married and have children.

Those children were grown up now. Paul was gone. Perished in 9/11.

V had popped back up again a year or so after the Chicago incident. Like always. Ready to be friends. With no questions.

They’d kept in touch by occasional letters, phone calls, emails. Skype now and then. Even met briefly a few times. Always when V was passing through, on her way somewhere. Always with little or no warning. Once when Carensa was in Europe on a writing assignment.

Then there was nothing. Carensa hadn’t thought much about it for several months. Because it was V. It could be a while that she didn’t hear from her. Months. Even a year or two. But eventually, she got a bit concerned. More so when emails bounced and there was nothing to be gleaned from Facebook.

V had gone radio silent. Nowhere to be found.

That said, Carensa was a solid researcher. The journalist in her went to work. She scoured the Internet for leads. Contacted journalist friends in Germany and France.

Finally somebody found a small notice in a Parisian newspaper about an accident involving a delivery van hitting and killing a pedestrian. No name mentioned. Just that the pedestrian was an American researcher and writer living in Paris. That part had been enough to get Carensa’s attention.

With a lead, even a flimsy one, it had been a relatively easy process to find more information. That slowly told her a story she didn’t want to hear. The American pedestrian was indeed Veronica Giles, aka V. She’d been hit by a delivery van when she stepped out into a busy street without looking. The inquest had ruled it a regrettable accident and no charges were filed.

More research tracked down this plot in the shady cemetery as V’s final earthly resting place. The American girl who went to Paris on a lark, had landed permanently.

And now Carensa was here, to say a final farewell. Of sorts.

She sat down on a granite edge of the neighboring plot and looked at the headstone.

“So here we are, V.” Carensa read the simple lines for the umpteenth time. “It was always random when we got together. And never enough time.”

There was just the quietness of the cemetery, with the ever-present din of traffic from the world beyond.

Carensa placed the small bouquet of flowers she’d brought at the foot of the headstone.

“That time back in St. Malo, we talked long about life. About purpose. About God and faith. I asked you about where you were with God.”

She shook her head slowly.

“And you replied that all that God and Jesus thing was nice. But you’d have to change too much.”

“Yet, every time we met or talked, it kept coming up again. We just never moved past the ‘I’d have to change too much’ part.”

“And I kept hoping, praying, that the next time we’d meet or talk would be ‘it.’ When you’d finally decide to take the step you’d put off for so long and get sorted out with God.”

“There was always next time.”

V had stopped using her ‘real’ name in favor of just being ‘V’ so as to assert her independence back when she was 20-ish and sticking it to the man was really important. Carensa recalled a number of conspiracy theories that had V had always floated. Every time they met, there was some new ‘deep truth’ that V had uncovered. And then in the end she’d died on July 4. Independence Day of the country she’d turned her back on to dive deep into exploring the history of a revolution so vastly different from the struggle for independence in her country of origin. Oh, the irony. Definitely not the date V would have picked for her own death.

Even so, dead she was. There would be no more conversations.

So often V and Carensa meeting had ended with Carensa feeling frustrated. With a sense of failure. Like their friendship was only so deep and there was a barrier to going deeper. A barrier that Carensa had tried, again and again, to cross, to break through, to conquer. All to arrive at a deeper relationship. No matter how much V might display or express hurt, she always backed off when things got too personal.

Carensa reached out and let her fingers glide over the letters on the tombstone. She felt the finality. No more conversations to be had. V was gone from earth.

As Carensa slowly walked out of the cemetery, she pondered how fleeting life really is. When they were both 20-somethings chasing the tide at Mt. St. Michel, it had impressed them how old the monastery on the little island was. They sensed the centuries of history. V had been all about studying and writing about history. Yet their own lives were bound to go on forever. There was always going to be another time to talk. Another time to come together. Another time to get things right with each other. With God. With the universe.

Then the clock stopped one morning on a small street in a back quarter of Paris. All it took was one step. For V time was up. Far too soon.

It was a long time that they hadn’t met. So Carensa was left wondering if V finally did get things right with God, with the universe. Between the two of them the barrier had remained. And now it was too late.

Carensa felt very aware that her time was limited too. Because while she reasonably expected to live another 20 or 30 years, there was no guarantee. Grandma had been in her 90s when she passed away. Yet, she could be done tomorrow. She stopped at the entrance to the cemetery to look back at the rows of graves, shaded by gently sweeping trees where time seemed to stand still.

Then she slowly turned and walked out into the bustling city of lights that pulsed on, confident of having all the time in the world.

2 thoughts on “A cemetery in Paris”