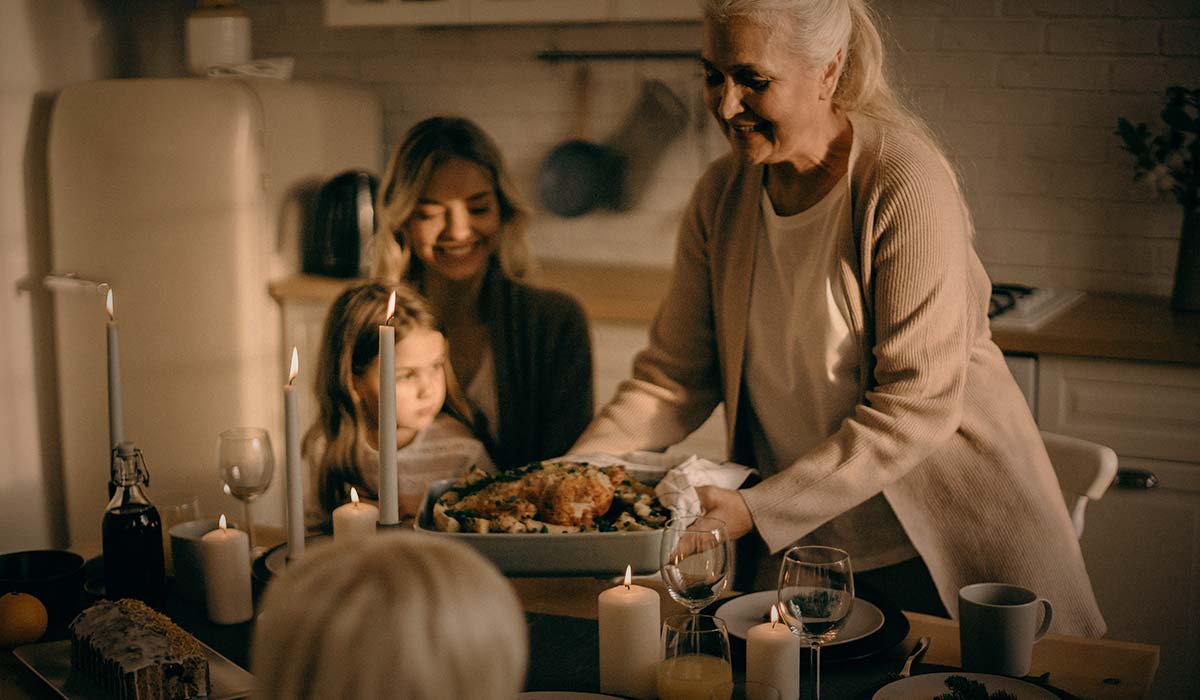 I experienced a real American Thanksgiving the first fall I was in college. Didn’t even have to cook. Because a new friend from church, Greta, made sure to invite me to her family’s house for the special occasion. Growing up in southern Sweden, the larder of the entire country, I was used to good food and plenty of it, but it all paled in comparison with the Thanksgiving table I encountered.

Not that I was a total stranger to a day of giving thanks: The Swedish church calendar has a Day of Thanksgiving (2nd Sunday in October). I’ve helped decorate the front of the local church with all kinds of produce, crops and fruit — the freshly harvested bounty that people have worked so hard for all year long and that will now carry everyone through the winter when fields and trees are bare.

The big dining experience in autumn in Southern Sweden is Mårten Gås (November 10, Martinmas). That tradition goes back to Catholic days, when there was a 40 day fasting season leading up to Christmas. So the meal on Martinmas was the last chance to really live it up for a while.

It was also when geese on the farm were ready for slaughter. Hence the traditional fare for Mårten Gås is roast goose. (Gås = goose in Swedish)

Here in the US, celebrating a day of thanksgiving goes back to the founding of the country and earlier. We’ve all heard about the Pilgrims and that first Thanksgiving following the harvest after their first year in the New World.

George Washington proclaimed November 26, 1789, as “a day of public thanksgiving and prayer to be observed by acknowledging with grateful hearts the many signal favors of Almighty God”.

In 1863, President Abraham Lincoln, proclaimed a national day of Thanksgiving on the last Thursday of November.

Whether it’s giving thanks for a rich harvest that will feed people during lean winter months, the establishment of a brand new country or the emerging victory of freedom in the midst of a bloody battle, there are lots of things to give thanks for. Not only on that one day of the year.

An attitude of giving thanks

At many Thanksgiving dinner tables, people go around and share one or more things they are grateful for. That’s an exercise that doesn’t come naturally to many of us. Because we’re not used to expressing gratefulness.

My uncle always said: “You shouldn’t be content.” He was part of the labor movement in the 1930s where workers truly had to fight for a decent wage and ditto workweek. So to him, “being content” meant that you had given up the fight and would soon lose anything that had been gained so far.

While there is truth in that perspective, if we don’t recognize the gains we’ve made and the things and people around us that have helped us, then we’ll just keep clamoring for more. Ever more, never satisfied. Because it’s never enough.

There are some very $$$$ rich people around who are still feverishly chasing more money, more power even in the winter of their lives. Because he who dies with the most toys, wins.

Of course, he who dies with the most toys is still dead. Oh, well.

During his lifetime, Paul the Apostle found himself in very diverse situations and places:

So there’s a balance.

Studies indicate that earning more money only increases people’s happiness up to a point. Apparently once the household income is around $105,000, money ceases to add to the happiness. Presumably because there’s then enough to not worry about where rent or the next meal are coming from.

When I was in 5th grade, I had an “old-school” teacher. He missed no opportunity to remind us, lowly students, that one day, we’d come back and thank him for hammering all that knowledge into our puny brains.

But there are other teachers I’ve gone back and thanked. As well as friends who came alongside me at various points in my life and without whom I totally would not be where I am today.

A few years ago, I was blessed to be able to meet Betty again after over 30 years. When I first came to the US, she and her whole family took me in as another kid in the family and helped me get settled in the new country. It was a true privilege to be able to sit down with her all those years later and tell her, face to face: “Thank you.” And let her know how her and her family’s investment in me turned out.

I was doubly grateful for that meeting when Betty passed away some 6 months later.

It would have been easy to just write a note. Even easier to think a grateful thought and never actually express it. But a key part of real gratitude is that we do express it to the person or persons we are grateful to and for.

So if someone has been helpful in your life, let them know.

When someone lets me know how I’ve helped them, it truly inspires me to go further and help others.

Do you write a journal? I did for years and then didn’t for many more years. But now I do again. Often we think of a journal as just a notation of what happened during the day.

But what about writing down the things we are grateful for each day? The writing process can help me search out what I am thankful for on this very day. And there are indeed few days that there isn’t at least one thing to say thanks for.

Once that’s written down, we are much less likely to forget it. Which in turn helps us frame our minds into being more grateful in life and what faces us.

Gratitude is not a panacea

I’m not saying that finding things in life to be grateful for should mean that we ignore things that are wrong and unjust. Quite the contrary. Because we are thankful for good things we have received or experienced, we’re motivated to help others around us enjoy similar blessings.

For instance, if I value receiving a living wage for work I do, then that will encourage me to support every worker having a similar living wage, so they can take care of themselves and their family.

Generosity — the sharing of resources I’ve been blessed with — comes out of gratitude. If my attitude is that I have what I have because I worked hard and deserve every bit of it, dammit, then I’m also not likely to give to someone else in need. Or even see their need.

“I did it all by myself”

Consider Jimmy Stewart’s meal blessing in the movie Shenandoah. He knows he’s supposed to say a prayer of thanksgiving before the meal. But doggone it, he did all the work:

Except there’s more to it than that. Yes, he and the others on the farm did the planting, tending and eventually harvesting. But fertile soil, sun and rain didn’t come from their hands. They probably also bought the seeds and tools.

It’s like the billionaire who proclaims himself to be entirely self-made. Started as a kid and grew a business or real estate empire, all by himself. Except he didn’t really. There were lots of other people involved, starting with mom and dad. Probably even got some help from the government.

None of us is an island. We got to where we are in no small part because others helped us. And that is a huge thing to be thankful for.

We didn’t create the universe

Unless the world just magically appeared out of nothing, then God created it and everything in it, including us. There’s good reason to be thankful to Him for being alive and for the gift of eternal life He offers us through Christ Jesus:

“Therefore, since we are receiving a kingdom that cannot be shaken, let us be thankful, and so worship God acceptably with reverence and awe.”

Likewise, in the Book of Psalms, David wrote:

Make a joyful noise to the Lord, all the lands!
Serve the Lord with gladness!
Come into his presence with singing!
Know that the Lord is God!
It is he that made us, and we are his;
we are his people, and the sheep of his pasture.
Enter his gates with thanksgiving,
and his courts with praise!
Give thanks to him, bless his name!
For the Lord is good;
his steadfast love endures for ever,
and his faithfulness to all generations.

There’s a lot to give thanks for. Every day we’re alive.