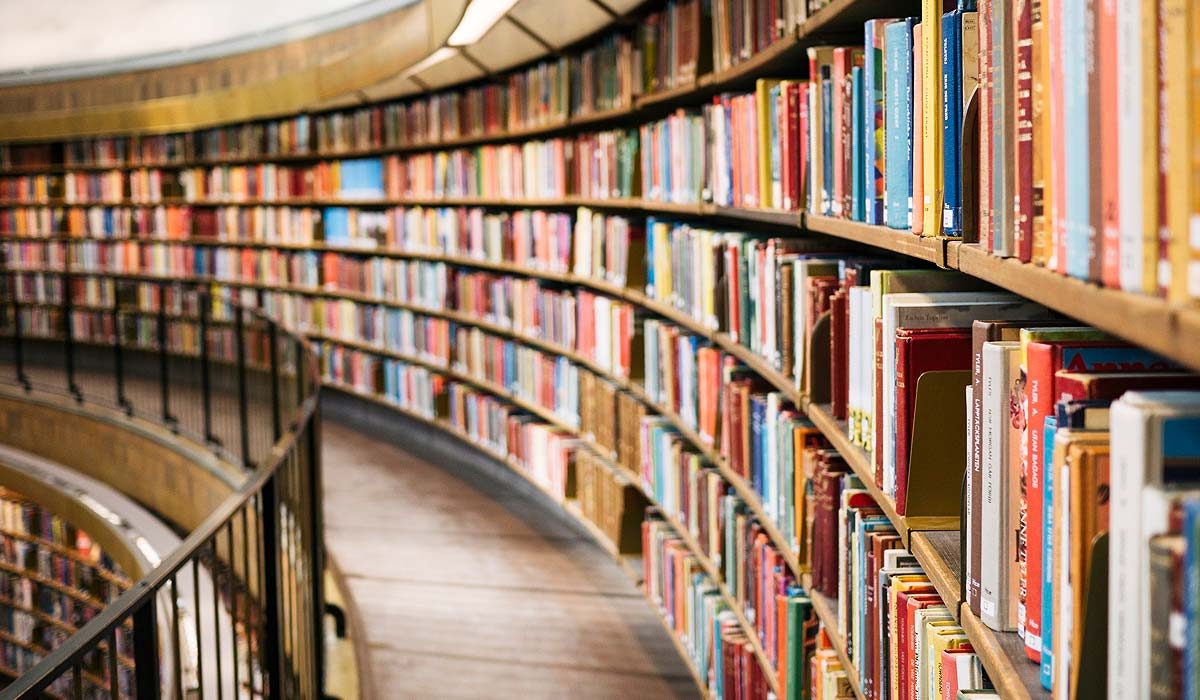 I love libraries. Although for a long time, I didn’t even have a library card. I did remedy that failing a few years ago. Now I frequently visit the library. Of course it helps that I go right by it on my daily walks.

When I was in grade school, we had a tiny school library. An adult could pretty much stand in the middle of the room, stretch out his arms and touch all the shelves. Even so, that’s where I discovered the world. I loved going there and finding books that were above my grade level.

Later I discovered bigger libraries. Like the one at my high school. Or the city library near the small town where I lived. They even carried a few American magazines, like Model Railroader. The world was getting bigger.

Once I got to college, the university library was of course indispensable. At the University of Iowa, the main library is right across from the film and broadcasting building. Very convenient indeed. Through umpteen research papers and projects, I got to know the place inside out. I knew that any information I needed, I could find somewhere in there.

Might be a news flash for some, but libraries don’t just have books. They have many other things. Including magazines and newspapers. Sometimes really old ones.

Truly fascinating to page through newspapers from 50 or 100 years ago and see what life was like then. Still recall writing a paper in college about what life was like in the US when WWII ended in Europe. What made it all really interesting was being able to peruse actual US newspapers from that time, to see the contrast of war news being reported right next to the latest sale at Sears or Montgomery Ward.

In the age of Netflix, Amazon Prime and iTunes streaming, I still get tons of movies and TV-series to watch from the local library. Because if it’s a bit older, or not super popular, then the library is more likely to have it on DVD.

“Public libraries have been a mainstay of my life. They represent an individual’s right to acquire knowledge; they are the sinews that bind civilized societies the world over. Without libraries, I would be a pauper, intellectually and spiritually.” — Author James A. Michener

Some time ago, I was doing video interviews in a far corner of Arkansas. I’d driven down for the day and had interviews scheduled one after another all day. At least I did, until one of them cancelled. So now I had a couple hours before the next one.

What to do? It struck me that there was a college in town, so I headed to their campus and found a table in the library where I could pull out my computer. Soon I was surrounded by books containing helpful information for one of my writing projects.

“The free access to information is not a privilege, but a necessity for any free society. One of my favorite things to do as a young man was wander through the stacks of my hometown library. I’d just browse until I found something interesting. Libraries have definitely changed my life.” — Actor Edward Asner

You might think that libraries really aren’t needed anymore, with internet, Google and Wikipedia. I mean, everything is right there, online, at your fingertips. So the library is just for kids and story time anymore, right?

Obviously not. Every time I stop by the local library, I see plenty of adults without kids there.

Sure, I can buy almost every book imaginable on Amazon. But that gets costly pretty quick.

When public libraries were started, buying a book was often way beyond the means of regular folks. So there was a truly vital function of making knowledge available to a wider range of people. Because the lord of the manor already had a giant library (but just for his family, and if he felt generous, maybe for some of the staff as well).

Some books I just like to read before deciding adding them to my collection. Other books, I know I’ll just read once, so being able to borrow it is a really good solution.

Some things I can find at a library, I’d never have at home. For instance, years ago I researched the history of a railroad in Sweden. When I learned that complete sets of national railway timetables were in a university library not far from were I lived, it was like hitting the jackpot. I spent a whole day there, pulling out timetables and copying off ones for the particular railroad I was interested in. Still have a binder full of those photocopies.

You may have heard that I’m working on a novel. It takes place in the late 1970’s. Being able to go to a library and find fashion magazines and a complete collection of LIFE Magazine is invaluable to ensure I get all the details right. Yes, I lived through those years, but there are all too many details that have faded off the memory radar screen (or details I might connect with the wrong year).

“You want weapons? We’re in a library. Books are the best weapon in the world. This room’s the greatest arsenal we could have. Arm yourself!” – Russell T. Davies (Doctor Who)

“Don’t join the book burners. Don’t think you’re going to conceal faults by concealing evidence that they ever existed. Don’t be afraid to go in your library and read every book…” ― Dwight D. Eisenhower

Years ago, Diane operated a day care. Each week she took all the kids to the city library for story time. That’s no light undertaking when you have 5 or 6 kids to bundle up in the middle of the winter in Iowa, get them safely into the car, drive across town and get them into the library. Repeat in reverse to get back home afterward.

This one family brought their young daughter to Diane’s day care, but expressed that they would prefer this weekly trek didn’t happen. Diane told them it was a non-negotiable. If their daughter was at her day care, she’d go to the library.

Fast forward a few years. By this time those same parents had one more child in Diane’s care. And they insisted on that library trip each week. Because they saw what those trips did for their older daughter’s development.

“In a good bookroom you feel in some mysterious way that you are absorbing the wisdom contained in all the books through your skin, without even opening them.” ― Mark Twain

I love reading. It opens new horizons and helps me understand both other people and places in the world now, as well as times in history long gone that helped shape where we are today. So it’s no wonder that the library is one of my favorite places. Seemingly no matter where I am, I always find myself at a library, sooner rather than later.