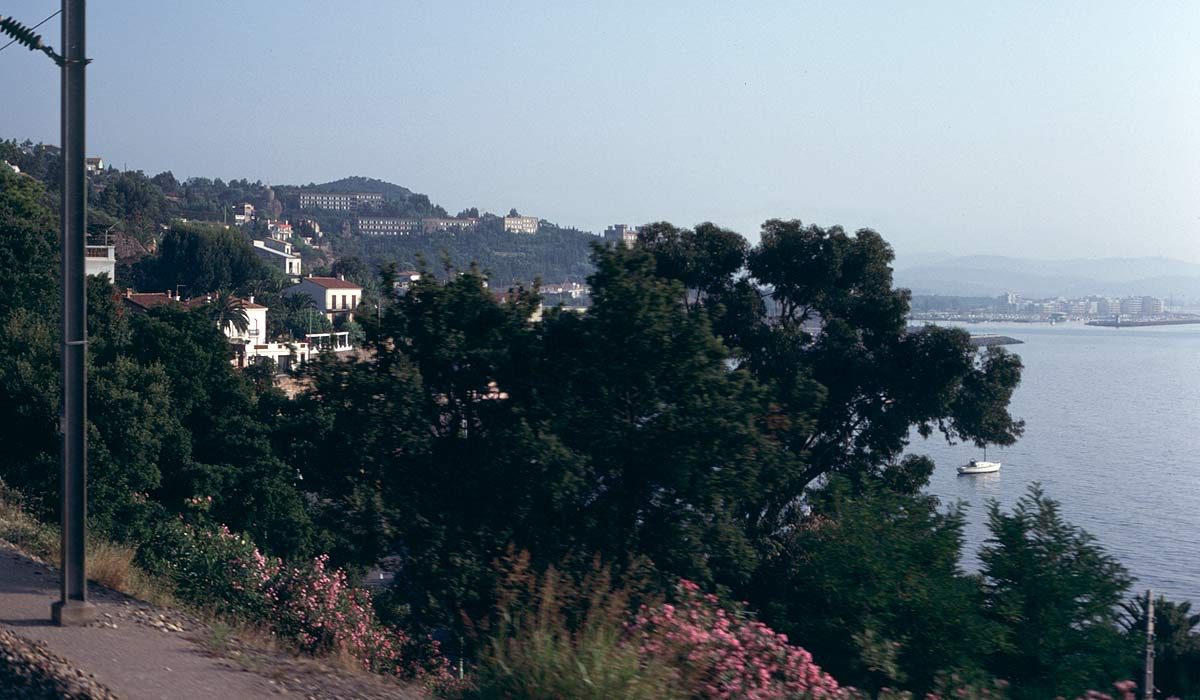 It was a crazy spring. One I didn’t want to relive any time soon. As winter receded, I still had lots of plans for the future. Then as the world outside grew warmer and greener, my world fell apart. I broke up with my girlfriend. And that shot down any summer plans.

As school ended, I got a job in the harbor, doing industrial cleaning. Not exciting and nothing whatsoever to do with the photography I was studying in school. But it was a job.

I approached friends about traveling across Europe together — because I had no other plans for vacation. At first, a modest “That’d be cool.” Then nothing. At all.

Somehow, I must have decided to step out of the box after all. If no friends were coming, I’d just go alone. I got a rail pass and bought a big, blue backpack. I had a plan.

A train journey to remember

One evening in late July the adventure started with a train ride from my small home town to the city. Then a ferry across the strait to Copenhagen. Finally I was at the gate to the wide world: Københavns Hovedbanegård (Copenhagen Central Station). When you grow up in southern Sweden, Denmark (or at least Copenhagen) isn’t really foreign soil. They just talk differently.

At Copenhagen Central Station there were trains with destination signs for exotic places like Paris, Moscow, Rome. The loudspeakers made announcements in 5 languages: Danish, Swedish, English, German, French. By the time they got to the last language, announcing the imminent departure of the train, said train was more often than not already rolling away from the platform. But it was totally cosmopolitan.

Here I’d board a night train and tomorrow morning wake up somewhere in Germany. That was adventure.

A long train made up of sleepers, couchettes and regular coaches rolled in. Being young and on an adventure, I traveled without any reservations. So dashed for a train car whose destination sign indicated that it was going far, far into Germany, and got on as soon as the train stopped. Found a seat in a compartment and stashed my backpack on the overhead luggage rack. My goal was Monaco – Monte Carlo, beyond Germany, the Alps and France, far down on the Mediterranean coast.

I stayed on that train all through the night, waking up to watch the train roll onto and then off a ferry and later stop for a while in Hamburg, exchanging cars with other trains.

Next day was all on the train, speeding through Germany. By evening, I got off in Geneva, Switzerland. From there I boarded another night train and eventually woke up as that train was leaving Marseilles, early the next morning.

The countryside was dotted with cypresses, acacias, palms and olive trees. Houses were white with red tile roofs.

Then there it was: The Mediterranean Sea. As blue as I’d imagined it. I was really on the Côte d’Azur, the French Riviera. The train snaked through curve after tight curve, hugging the rocky coastline.

We stopped in Cannes. I was glued to the open window to soak in this new world. Palm trees and cactuses. Lots of craggy rock. Brilliant sunshine. Beaches and boats. And always the sea.

The train left Nice. Couldn’t be much farther now. It got my backpack on, to be ready to get off. The train came around a curve and stopped in a city. I couldn’t see a sign. It seemed to be a little early for Monaco. I stayed on the train. It rolled out through a sweeping bend. I looked back at the city — newly built hotels, a big yacht harbor, a long beach. Surely that was Monaco and I’d missed it.

The azure-blue sea gave no answer.

The train sped into a tunnel and when it came out, there was another cliff, blocking the view forward. On top of it, amidst palms, was a palace. No question now. I hadn’t missed Monaco. The train dove into another tunnel and as it came back out in daylight, it was already slowing down at a station.

I quickly headed out onto the platform. The morning was warm and the air smelled of salt. Fresh and full of possibility. I had arrived and my adventure was starting.

I’ve made many journeys since. There have been many more adventures. Some even bigger. There were more momentous events on that very trip.

Over the years, other events of importance have happened.

So why reminisce about this one journey from long ago?

Because we need to remember:

When everything was seemingly falling apart that spring, I heard the phrase “it’s always darkest before dawn.” Didn’t make much sense at the time, and yet, looking back, it was somewhere during a time of darkness that the seeds of what would become a great summer were planted.

I could have stayed at home all summer. Could easily have worked all summer and then gone back to school. Because who wants to travel all alone?

Of course, later on, it’s easy to forget all that and just focus on life right now and the things I face today.

That’s why, even before the Israelites set out from Egypt, God instructed them how to celebrate and remember their deliverance. The milestone of their leaving where they had been for 400 years. Passover was born. And is still celebrated today. So that generations to come will remember what God did for his people back then. And can do for them again. And again.

There are many other places in the Bible where we’re told to do set up a marker or to observe a holiday to remember something God did for his people.

God wants his people to remember what he has done in their lives and what they have made it through. Same for us. It might be surviving cancer or a stroke. It might be how a random connection turned into a job. How we first met that special someone. Or the birth of a child. There are so many milestones in our lives.

If we allow them to just fall into some nebulous past, getting mixed up and turning blurry, we lose track of who we are and all that we can be.

When we forget our past, we have to learn all over again. That’s painful. And it doesn’t move us forward.

Remembering, it’s who we are

So it’s a healthy thing to find ways to remember key events, milestones in our lives. We make it reasonably easy with things like anniversaries or birthdays. But there are many other things, more obscure. Yet worth recalling.

Some ways we can do that:

Remembering key events in my life, gives me perspective for today. And reminds me of who I truly am.

When facing a new challenge, it’s helped me many times to first stop and remember a similar event in the past. And then, gathering strength and insight from that, I can boldly move forward into what life has ahead for me.

Take a moment to think of a few experiences from your past that were milestones. How did each of those events affect you? What did they enable you to accomplish? To become? How does that make a difference with things you’re facing today?

One more thing: The rail journey I described above took me from Sweden to Monaco. It was the start of 3 very full weeks of crisscrossing the European continent. It was a life-changing time and also brought new friendships, some of which you can read about in A moment that changed everything.