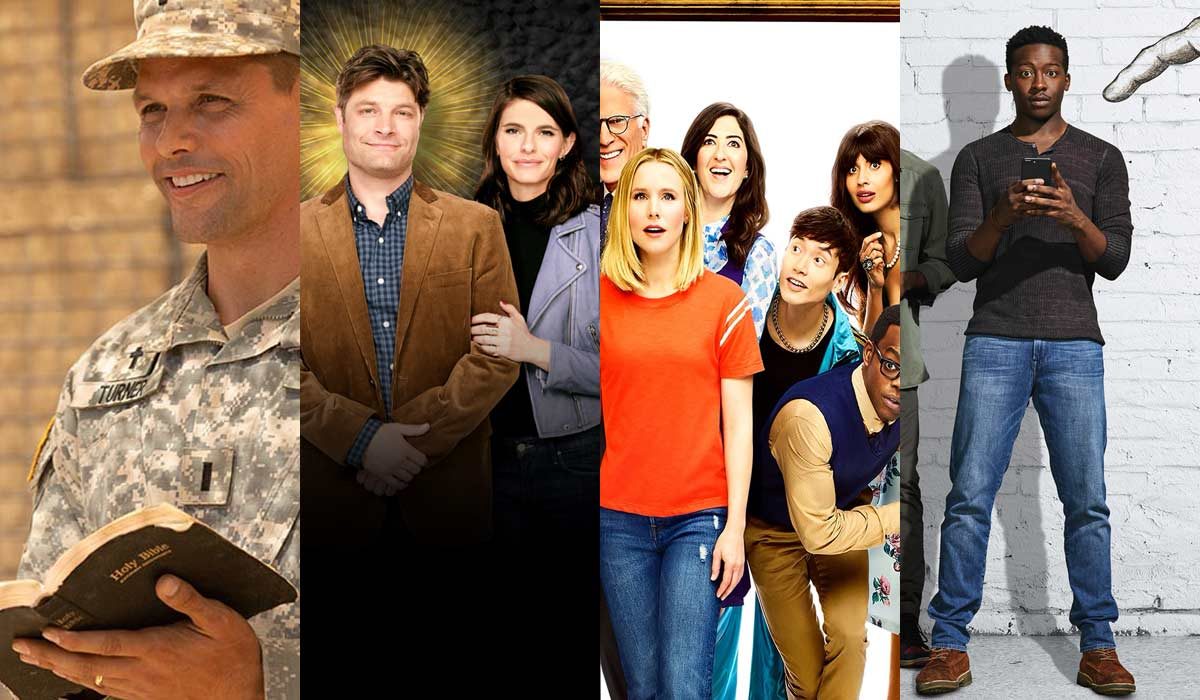 Faith movies or TV-series are often a mixed bag. They can get a bit cringeworthy as they take us on a (heavy-handed) journey from unbelief to epiphany to redemption.

The term conjures up a vision of something that will preach quick (predictable) solutions to a stereotypical set of characters with a given outcome in mind. Everything is there to bring us to the “come-to-Jesus moment”. All so clearly spelled out nobody can possibly miss it.

So I get excited when I run across a movie or TV-show that deals with faith in a setting that is more authentic. Where we see characters actually grapple with their questions, search for answers and somehow make sense of life.

Because that’s something we’re all looking for. In real life, that’s a messy and often quite meandering process that takes time.

This movie is based on the real-life experiences of Army Chaplain Darren Turner and his wife Heather. Fresh from seminary and basic training, he’s deployed to Iraq and gets right into the war scene. Back home, Heather is faced with helping other military families make sense of things, while doing life…

Darren gets thrown right into real battle — can you ever really prepare for that experience? On the base and on missions, he works to connect and minister to soldiers who may or may not be interested in what he has to say.

All is not over once he comes home from deployment. Life is forever changed, but is he able to deal with that change? Can back home deal with him?

Indivisible is the latest film written and directed by David G. Evans. I’ve known David for almost 2 decades and he’s provided updates from the very first stages. So glad to see it in theaters now.

After seeing the movie in a pre-screening, I told him that I had no idea how long it was, because it started, developed and kept going. So I never sat there wondering about other things. Too busy following the story. Which is a good sign.

I highly recommend you go see Indivisible. It’s not just a movie for our military families, but for everyone, because we all have to deal with life, faith, what we do (or don’t) believe in, as well as how we build and maintain that faith.

Indivisible opens in theaters on 10/26/2018. Learn more on the movie website.

And now, as they say on Monty Python, for something completely different:

This short-lived sitcom chronicled newspaper film critic Chip Curry’s efforts to literally live according to the Bible. He was prompted to set out on this journey by the death of his best friend. Guiding him on the quest are a priest and a rabbi.

Since it’s a sitcom, it’s not surprising that the things Chip decide to pick for living Biblically are rather random and frequently don’t work out so well.

The show was cancelled after one season and I can see why — because how many unique episodes can you really do on this theme in a sitcom format?

Even so, within the comedy, there are questions raised about how we actually go about living according to the Bible. That’s something many of us have struggled with as we work out what we believe in and how it shapes us.

This quirky show is now in its 4th season on NBC. You can catch prior seasons on Netflix.

The Good Place starts with 4 people (Eleanor, Chidi, Tahani, Jason) who have just died on Earth and now find themselves in something called The Good Place (as opposed to The Bad Place), where they are greeted by Michael.

Certainly looks like Paradise. Except there are cracks. Just maybe everything is not quite as it seems.

The series raises plenty of philosophical questions (Chidi is a philosophy teacher) about life and existence, good and evil. What constitutes a good life? Should there be another chance to get it right after death? Is it possible to tip the scales and change one’s eternal destiny?

The Good Place is 30 minute episodes, so easy to find time to watch it. It’s engaging, digestible.

Whenever the characters think they’ve found a suitable philosophical or practical solution to their current dilemma, a progressive complication pops up, because there’s always something they forgot to think about.

When I started watching the series, I wondered how long the concept would hold up. Maybe a season or two. It’s now in season 4 and still thought-provoking, thanks to clever writing.

The characters are still changing, redeeming their lives to become who they really could be. I look forward to each new episode and what philosophical dilemmas they’ll tackle next. Eternal destiny hangs in the balance.

I’m always a bit hesitant to recommend a new show, because I’ve seen trailers that looked great and then you watch the actual show, only to realize the promo contained ALL the good parts. Not going to get any better.

That said, the premise of God Friended Me sounded interesting as the series sets out to explore questions of faith, existence and science.

Miles is a podcaster atheist who gets friended by God on Facebook. That turns his life upside down. Miles next gets friend suggestions from God via Facebook and runs into those people around New York.

Then there’s Cara, writer for an online magazine. She was a friend suggestion from God to Miles and the two become friends.

Rakesh is Miles’ friend and a “dedicated game player” (aka hacker) with a knack for shutting down all computers around.

Together they end up being change agents in the lives of people they meet, all the while trying to track down the mysterious God account.

The show is in some ways an exercise in how many degrees of separation there really are between people. People who don’t know each other end up connected, changing each others lives in the process. Is it predictable? Possibly.

But a good reminder of why we need to step out of our preconceived notions. And why we need each other — including people we haven’t yet met.

A few episodes into the first season, it’s a good show. The kind of story I’d like to see more of. Where good things happen to people.

It also makes me think. I don’t get Facebook messages from God, telling me to go find this or that person. But what seemingly random connections are there as I go about the day? Ones where I can connect with another person and make a difference in their life, briefly or for a long time. And am I looking for those opportunities?

Good movies and TV shows entertain and engage us. Make us think deeper about life and what we’re all about. Spur us to life change and action. When that happens, our lives and the lives of those we interact with are changed for the better. That’s faith in action.