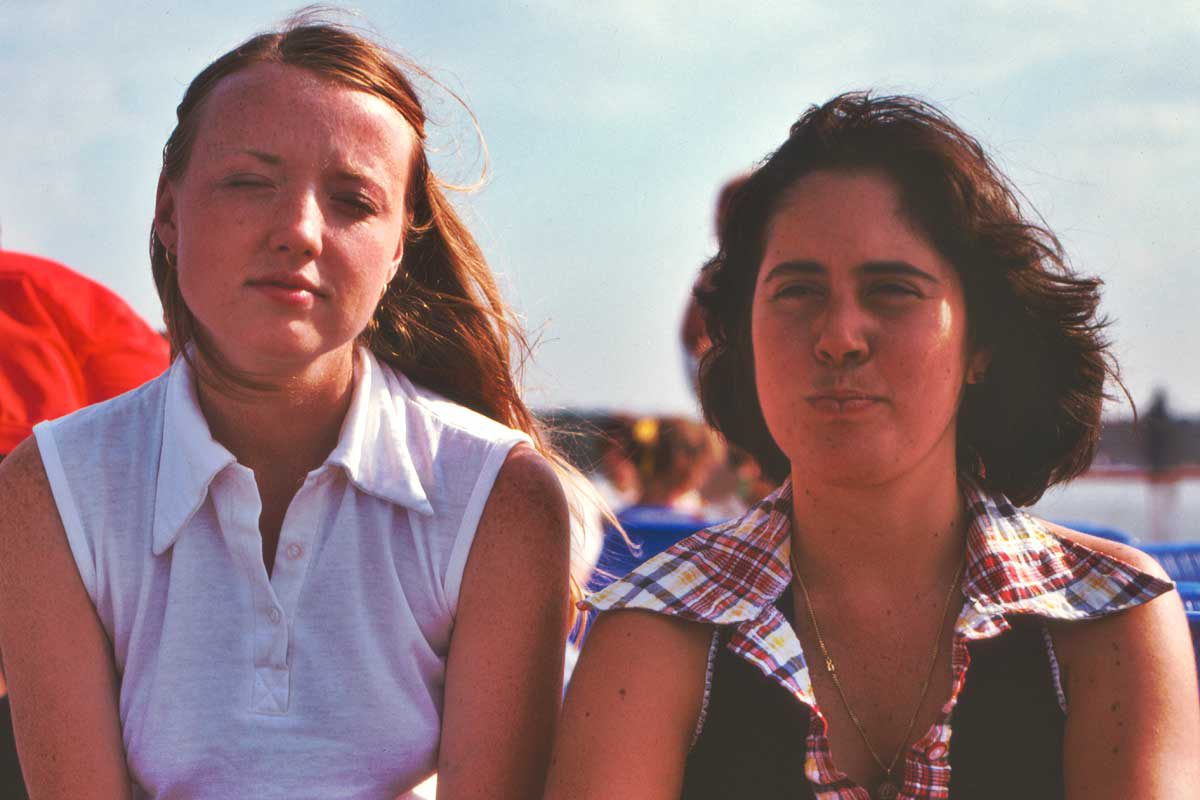 I arrived at Youth Hostel Ernst Reuter in Berlin, Germany, in early evening one day in August, 1975. Checked in, got something to eat and pretty soon was sitting at a table chatting with several German guys (none of whom were from Berlin) about the city.

People came and went around us, more or less unnoticed. That is, until she stepped into the room. She was definitely American, dark-haired, sun-tanned and with a backpack on one shoulder. She looked around the room and asked, loud enough so everyone would hear: “Does anyone here know Berlin?”

She could have appeared earlier or later, or she could have not asked that question — either would have made all the difference in the world.

Next thing I knew, all the others at the table pointed at me. Funny, since I’m not German. But I’d spent enough time in the divided city to know it very well and apparently that had come across in the conversation with the guys.

Soon she and I were by ourselves at a table, looking at maps and brochures, figuring out what she wanted to do with her time in the city. I learned that her name was Adis, from Florida, in a grad program in Europe and backpacking around the continent before classes started. And she wanted to be efficient about seeing Berlin.

I suggested the usual must-see items: Kurfürstendamm, the Reichstag, Charlottenburg Palace, a trip over to East-Berlin. Then I added:

“I’m going on a river cruise on Saturday afternoon,” pointing out the route on the map, in south-eastern Berlin, from Wannsee across the lake and river up to Tegel. “About 3 hours. Great way to spend the afternoon.”

She looked at the map and shook her head. Something about not wanting to waste an afternoon that she could be doing city things. I told her, if she changed her mind, she could let me know before Saturday.

I didn’t see her again until I was about to head out of the Youth Hostel after breakfast on Saturday morning. Walking through the dining hall, I heard her yell: “Hey Swede, are you still going on that river cruise today?” She was at a table with a bunch of American girls, all having breakfast. I stopped and turned. “Yeah, and you are still welcome.”

We figured out when and where to meet.

At 2pm, the appointed time, I was waiting at the corner of Potsdamer Chaussee and Kronprinzessinnenweg in Wannsee, near the lake. A bus pulled up to the bus stop, a head popped out the exit door and there she was.
“Is this where we get off?” she shouted.

“Yes,” I replied, wondering about the “we”. Two girls hopped off the bus.

She’d brought along a new friend, Debbie, from the Youth Hostel. Debbie was from Illinois, traveling around Europe with a group of students and had an afternoon free when Adis snagged her.

We enjoyed hanging out in the park at water’s edge and then had a very relaxing afternoon on an excursion ship up lake Wannsee and the Havel River to Tegel.

For much of the boat ride, you don’t feel like in a big urban area at all. Instead, you’re surrounded by an expansive lake, bordered by green shores and hills. Dotted with sailboats. You could even forget that all this — lake, river, city — was surrounded by the Wall. A green, pleasant island in a sea of drab communism.

The river part of the trip went through an urban/industrial area. Barges at docks dotted the banks, bridges carried never-ending streams of people and vehicles over the river.

Then as a finale, there was a lake again and more pastoral surroundings, before the cruise boat reached its destination.

The changes along the way mirrored our time together. We relaxed, talked, exchanged travel experiences, took in the scenery, talked about life. It was a journey and conversation that seemed like it could go on forever. And where it seemed like we’d been together forever, rather than only having just met.

As we stepped off the boat in Tegel and made our way to the bus stop, Adis had an idea for the evening. How about we all go down to Dahlem, in the American Sector, where there was a big German – American Beer Fest that night? Debbie bowed out, needing to connect back with her group, but Adis and I headed off to another adventure.

Late that night I was on the Zoo Train Station, boarding a night train to head west, to continue my backpacking journey. Like a river, life flowed on, but that day I made 2 new friends and looked forward to starting to write to them when I got back home.

Traveling around Europe in the summer of ’75 I met a lot of people, from all over the world. Exchanged addresses with a good number of them. But it was these 2 girls that became long-term friends.

It was also because of those friendships I eventually came to the US. Adis was an American studying in Europe. It seemed perfectly normal to her that a Swede could go to college in the US. I might have thought it was a cool idea and no more, had it not been for these 2 friends who cheered me on.

Eventually we lost track of each other as life moved on, yet somehow, decades later I reconnected with both Adis and Debbie.

To think that it all started with Adis just walking into a room and blurting out a question to no one in particular. What if she hadn’t asked just then and there? What if those German guys hadn’t all pointed at me? A moment in time that made 2 life-long friends and changed everything.

Reflection:
Is there a moment that changed the course of your life?
Do you have a friend or two who directly affected who you’ve become? Have you gone back to thank them and tell them how they affected you?
How would your life have been different if that moment or that friend hadn’t happened?

5 thoughts on “A moment that changed everything”