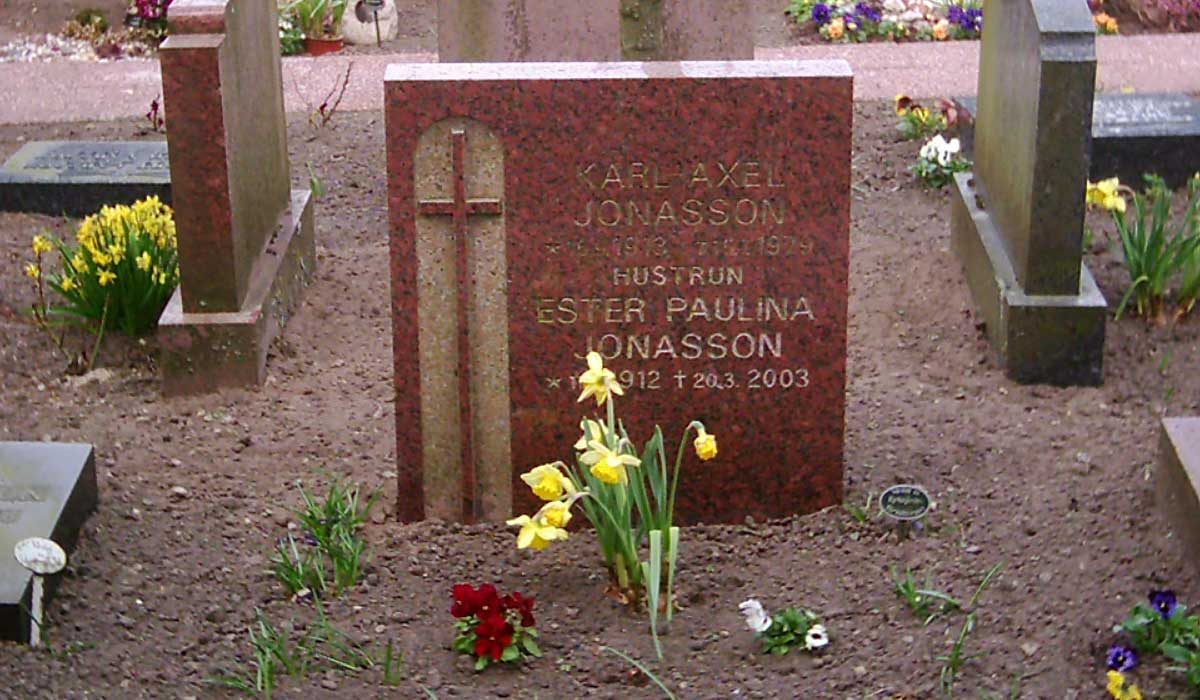 My daughter Stephanie was 7 at the time. She and I had traveled to Sweden to spend time with my mom. Usually when mom wasn’t well, and we asked if we should come see her, she’d wave it off and tell us that we needed to make that long trip from the US to Sweden when she was well and we could all enjoy the time together. But this time she hadn’t protested. She was seriously ill and this might well be the final time to see her alive.

So I planned a journey for Stephanie and me. Diane had work commitments that kept her at home. But we felt that it was important for the granddaughter to get one more visit with grandma.

Actually, by the time we got there, mom was on the mend and we had a nice visit for a couple weeks. Stephanie was thrilled with the time with grandma and my mom adored her granddaughter. That kid could have burned the house down and mom would still have hugged her and loved on her.

Then came the final evening. We had to say goodbye and head back to the US. The entire walk to the train station and for a long while on the train thereafter, Stephanie was inconsolable. And mad at me. Because how could I be so heartless as to leave her darling grandmother all by herself!? Surely we would never ever, ever see her again.

Truth be told, I didn’t feel any much better. Because of the health scare that prompted the trip, it was even more on my mind than at other times when we said goodbye: One of these times, it will be the last goodbye we say in this life. This side of Heaven. At other times, that was more of a mental exercise. A somber footnote if you will.

This time it was a very present reality. While mom was doing okay right now, who was to say that she wouldn’t take a turn for the worse and be gone forever tomorrow? Or the day after. Or a month from now. Because it would happen sometime.

Given the distance, I’d learned to make sure that when we said goodbye, everything had been said. No unfinished business. Mom knew I loved her. I knew she loved me.

Because in life, you just never know what’s around the next bend.

The way it’s “supposed to happen”

We’ve all seen that scene in a movie or on TV: A person is dying. Propped up in a bed at home (or possibly a hospital). Very much surrounded by family members who have gathered for that last, meaningful goodbye. The chance for those final words.

Depending on the story line and the kind of relationship, it’s might be a deeply meaningful time where last wishes are spoken. Or a tense time where hidden secrets are suddenly brought out. Revelations that will continue to shake the living, long after the deceased person is laid to rest.

Reality plays out differently. And not necessarily the same way twice. We may be there when the loved one passes away, but there’s no meaningful conversation at the very end. Just a gradual slipping away into unconsciousness. Or last words that make no sense at all. That happens.

While a nurse, Diane worked in hospice care for a season. She got to see them all. No two alike.

Or maybe we’re not there at all.

Which was my case. I wasn’t there when either of my parents died.

Dad passed away the first summer I was home from college. Complications from decades of type 1 diabetes led to his left leg having to be amputated. Right before I came home for the summer.

I visited him in the hospital almost every day. My dad was definitely an optimist about life. He saw possibilities. He talked about recovery and learning to walk again. So he could come back home to his and mom’s house.

Except there were a few sores on his other foot that also weren’t healing. The doctors told mom they anticipated having to remove the other leg as well. But they hesitated to break the news to dad. Because dad was set on walking again. And returning home. Stairs included.

In the end, mom and I got a phone call one Sunday morning. To tell us that dad was dead. Massive heart failure that morning. It was over in moments.

Definitely no time to prepare to grieve there.

Mom lived another 24 years. She was 91 when she died. Diane, Stephanie and I went over to Sweden to move her into a nursing home after she fell down in her apartment and it was clear she couldn’t live by herself any longer. That was in February, so Stephanie and mom got to celebrate their birthdays together (the dates being only a week apart).

We got mom settled into the nursing home as best we could. When we talked about summer coming, she predicted she wouldn’t be around for it. A month later, I talked with her on the phone. She was in the hospital, feeling under the weather. The call ended with me telling her I’d call her again day after tomorrow.

That never happened. By then I was making arrangements to fly to Sweden for her funeral.

So I was not there when either of my parents died.

I also wasn’t present when my grandmother, Emma, who lived in an upstairs apartment in our house for most of my growing up years, passed away. By then she’d gone to live in a nursing home. Eventually took ill and died in the hospital.

At least I was there at her funeral. As well as those of my parents.

Since I lived across the ocean, I didn’t make it to the funerals of my aunts and uncles when they passed away over the years.

A friend of mine was losing her mother to cancer. Her mom was able to remain at home, with help from her daughters and a nurse.

At one point, my friend faced a decision: She had a trip planned to go see her daughter who lived half-way across the country. It had been set up months ago. Before the cancer made its reappearance. Now the trip was coming up. Based on the information available, there was no expectation that her mom was about to pass away. So my friend went. For maybe a week.

She almost made it back. Her mom died just an hour or two before my friend was back from the trip.

A failure to not be there?

Did that make her a “bad person”? Sometimes we feel that way. Like we majorly failed the person who died.

I went there. Briefly. Somehow I should have been there when mom passed away. What if I’d realized that her being in the hospital then was terminal? Could I have made it there? Would it have made any difference? What would have been said that hadn’t been said already?

Likewise with dad. I’d seen him on Friday, stopping by the hospital after work. We talked. We talked more and deeper that summer than we had before. Because when I lived at home, before heading off to college, they were just mom and dad. Always there. Then I went away and came home to a very changed world. I’d changed. Matured. And dad and I related in a different way.

In the end that’s the time I’m truly thankful for. The weeks of me stopping by the hospital to see him and us talking. Relating.

Even so there was much more that could have been said. He wasn’t there when I graduated college. Or when I got married. He never got to meet Diane or Stephanie.

So many things I would have liked to tell him over the years.

But in the end, all that really mattered had been said, by both of us. There was nothing left unsaid.

Same thing with mom. Though I feel like I had more time to prepare there. Because I knew every time we went over to see her that it could be the last time in this life that we’d spend together.

So I told my friend that she was definitely not a “bad person” for not being there when her mom died. No failure there. I knew her mom and I was confident that her mom wouldn’t have wanted her to cancel that trip. Life must go on. Besides, I was rather confident that they too had left nothing unsaid or unsettled.

Learning to live with dying

Does it change how you grieve when you’re not there for the actual death? Maybe. Certainly can lead to a lot of regret and “What if … ?”

It does change how we live and handle relationships when we realize that any of us, who are here today, could be gone tomorrow.

That family member or friend I just spent quality time with, I may never see again. Because things happen.

It’s not tied to how many miles apart we are. Or age. Friends lost their oldest daughter in a freak accident as she was driving home from college one weekend. Cancer (and other illness) hits at all age ranges.

It does underscore how important it is to not leave things unsaid and unsettled. To have clean slates in our relationships.

The lesson for all of us it to keep short accounts. To settle differences and misunderstandings. To communicate. Because we don’t know when it will be the last time we see that other person.

My parents have been gone for many years now. In fact it’s 40 years ago this year that dad passed away. There’s still not a day that I don’t miss them. And I’m thankful for all they did to help me become the person I am today.

If there was something unsaid or unsettled, we have to learn to come to terms with that as well. One way we can bring closure and honor the person who is gone, is to go on with life. Because we are still living and we have opportunities here and now. It may also take some counseling or the support of a very good friend.

But there’s still that “What if … ?” — in an alternate scenario, if I could go back and change things and be with mom or dad when they passed away, would I do so?

Yes, I would. Because of the meaning of being there. For them. And for me.

Except I wouldn’t if it meant giving up other, previous, and precious time we had together.

Because in the long run, the most important was the times we had together communicating over the years, connecting. That’s what built the memories and the relationships and that’s why I still miss them today, many years later.

Being there at the moment of death would have been meaningful, but it would never define the entire relationship. Nor would it be how I remember them now.