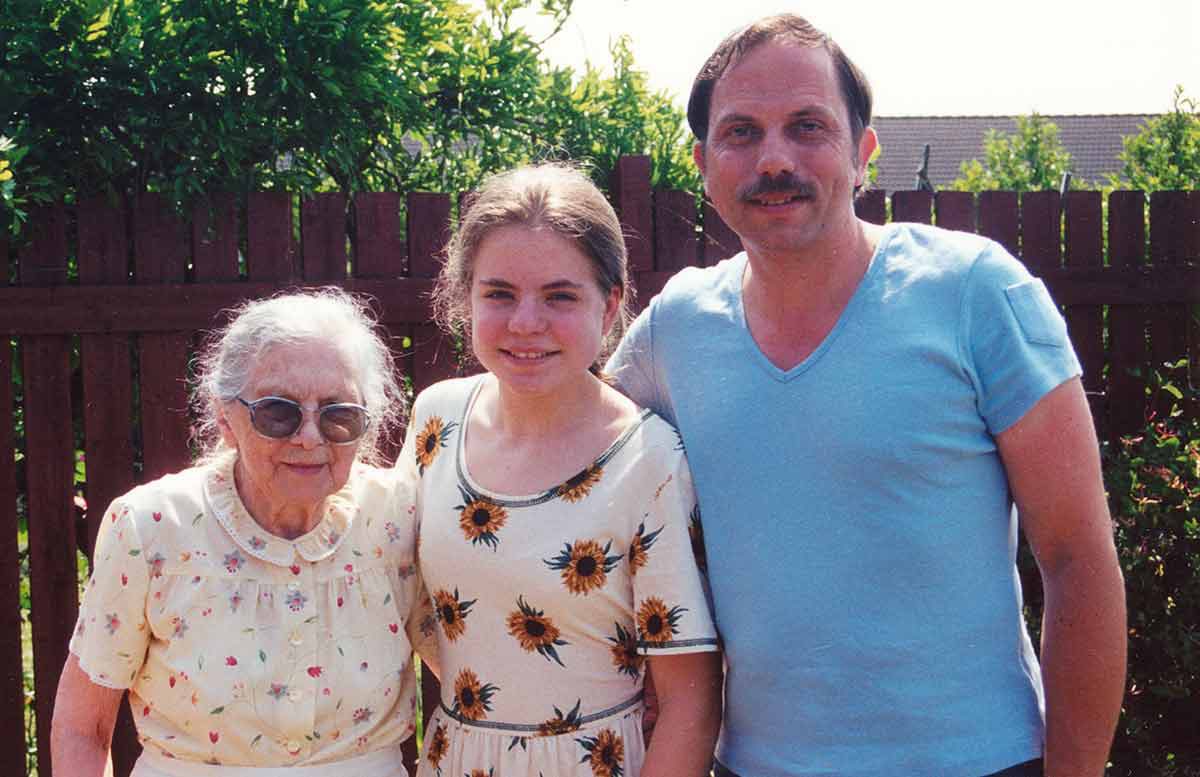 Grandpa met Geronimo! That’s what my wife Diane’s Grandpa told us. But, let’s face it — we didn’t always know if his stories were fact or fiction. So yeah, right.

Then years later, Diane and her mother went to Oklahoma and the town where Grandpa grew up to research family history. They learned that Geronimo did indeed come into town. And he talked with school kids from time to time. So turns out Grandpa wasn’t making that one up after all.

Family history is like that. You just never know what you’re going to find.

A friend from my hometown in Sweden recently sent me his memoirs. He’s written down his life’s story, mostly for his own family, but decided to share it with others who hail from the same town. It was fascinating reading, because I knew all the people he wrote about. They were part of my growing up years and reading it all put lots of things in a fresh perspective.

A friend told me the other day that she is writing her family’s history, gathering information from extended family members. That’s a great undertaking and I wish her all success with capturing the many stories. Have a feeling this could be of interest to a larger audience.

Then I stopped by the website my cousin’s husband has put together of a giant family tree, tracking his family and ancestors, as well as hers. He has well over 7000 people in there. I looked up myself and then traced back through the generations. In the 1600s records get sketchy and dates lost. But that’s a trail stretching back some 350 years! There are 4 generations of my family buried in the same cemetery in Sweden.

Years ago, I sat down with my mom and a video camera. Several hours later, we’d made it through part of her life history. I asked questions and she talked. Other times talking family history, recording it on video followed. Sometimes over a photo album or even a map. Anything to get the memories flowing.

It’s been many years since she passed away, but we have the recording and her story in her own words. Unfortunately, my dad passed away much earlier and so I don’t have a recording of him telling his family history.

Diane and I have been fortunate to get her mom to sit down and record memories on video. Even got an audio recording of her dad one time. And one of Grandpa.

My mom did write down the story of my first years, up until I was in school, and in her words, “could remember for myself”.

Stories are powerful, especially when they are about us, who we are and where we came from. For many of us, capturing those stories is one of those things that we talk about doing, but never get around to.

As I write this, Christmas is not far away. Holidays are often a time when we get together with family we don’t see frequently during the year. So it can be a perfect opportunity to capture stories about life in close or extended family.

Written or spoken
For the longest time, I’d ask my mom to write captions for pictures in our family photo albums. But she never could get around to it. Then finally, I sat down with her, the photo album and a video camera and we talked about those photos, what they were of and who was in them. That was easy!

I bet your family isn’t any different. So people you can ask from here to kingdom come to write down some family stories and who will never do it, may be quite willing to sit down for a while and talk. After all, most of us like to talk when someone else is listening.

You probably already have the tools
There has never been an easier time to capture those stories. We have cell phones with high quality video cameras. And for those who don’t want their faces on video, the same phone records audio only as well. Or you may have a camcorder or a still camera that also shoots video.

An external microphone ensures better quality audio. You can get one on Amazon or from B&H Photo & Video quite inexpensively.

A tripod or other support for the video camera will make the video steady (and watchable).

Setting
One option is to find a quiet area with a comfortable chair for the person telling their story. As the interviewer, I prefer a regular chair where I can lean into the conversation and also see and run the camera.

Other people do better in a small group. Maybe gather a few people around a table and let them just talk family memories, while you keep the camera rolling, capturing it all.

Since everything is being recorded, there’s no need to try to take notes while it’s all going on. It can however be very helpful to come with questions or if you’ve heard the stories before, be prepared to drop in a reminder if something gets left out.

Questions
What makes family history most interesting isn’t all the dates and who married who and who moved where, but details about daily living:

The key is open-ended questions that invite the person to talk for a while.

Ask about what they thought about things or how things made them feel. That gets most of us thinking deeper and get more engaged.

You can also refer to historical events and ask what is was like when that event happened. For instance, most of us old enough, remember exactly where we were and what we were doing when we learned that President Kennedy had been shot.

Of course you may find that a person doesn’t want to talk about some historical events. For instance, my mom really didn’t want to go into much detail about life in Southern Sweden during World War II. To her the threat of invasion and the war coming there was scary enough that even many years later, she didn’t want to dwell on that time. (My dad on the other hand was always happy to talk about his time in the artillery during WWII.)

Keep it fun and easy
Above all, the process should be fun and easy on everybody. Especially for the person who is telling their story. That’s why I favor doing a recording instead of asking people to write down their story. Plus you will invariably get so much more detail when the story is spoken than if the same person sits down to write their story.

For posterity
So now the conversation and recording is done. Be sure to check the recordings and then back them up. Several copies.

Depending on time and energy, you may edit highlights together for a shorter version. While that can get really involved, the important thing is that the stories were recorded and the original, uncut version should always be kept intact. It is priceless.

You may even make a family tradition out of watching some of the recordings together at holidays. For years, at Christmas at my mother-in-law’s house, she’d pull out the old family home movies (8mm) and we’d sit up half the night watching the sisters growing up. (And yes, those family movies have been kept safe, and transferred to video for easier viewing.)

As we collect family history and learn where our ancestors came from, we also learn more about ourselves. That can only be a good thing. And the more we know ourselves, the better of a legacy we can leave for those who come after us.

Reflection
You know your own history — Do you know your parents’ stories? How about your grandparents? What if you asked them about their stories the next time you see them? Might they be willing to let you record the conversation? Maybe the starting place is for you to record your own history to share.

One thought on “Capturing family stories”