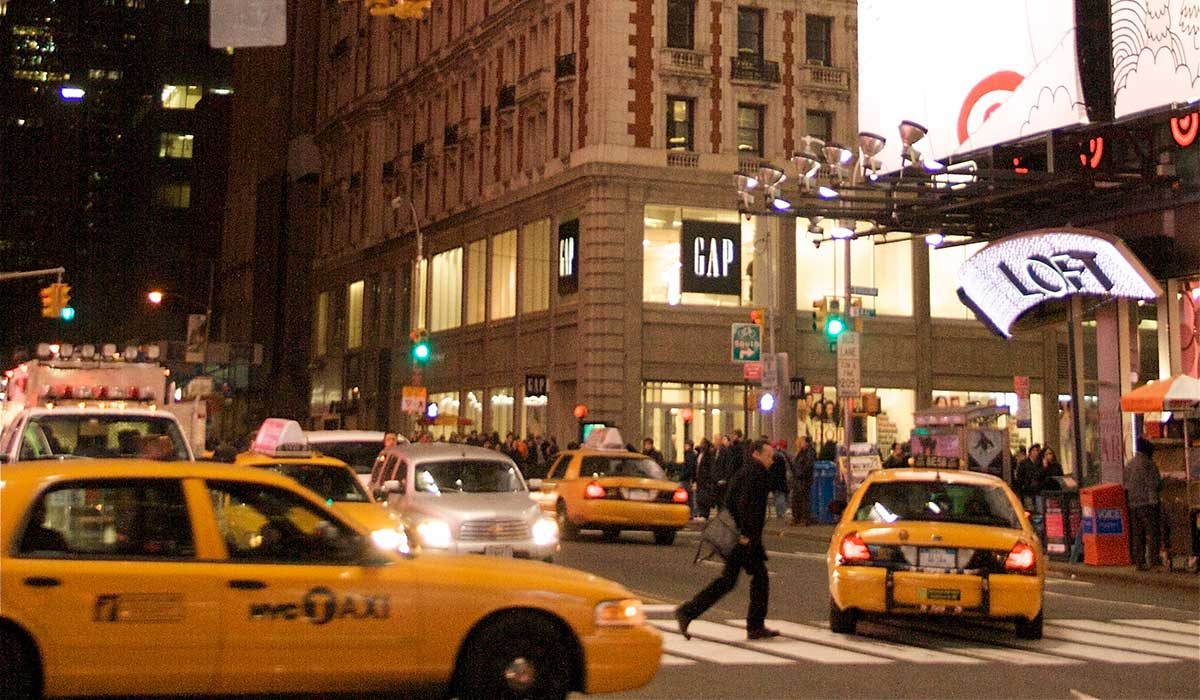 “What’s his medallion number?” Debbie quietly asked me. I was in the in the front seat of a taxi in New York City, right by the fare meter setup. Debbie was wedged in between me and the door. The cab driver was outside, back by the trunk, loudly arguing with the other passengers from the taxi. This was not going to end well.

A few short hours earlier that night, I arrived in New York. My very first visit to the USA. I was on my way to college. So far the trip had taken me from home in Southern Sweden by train across Denmark, then ferry to England and train to London. There I’d spent a couple days in line at Gatwick Airport to get a seat on the Freddie Laker Skytrain, a no-frills, lowest fare, first come, first served airline. Hence the queue: Each day there was one plane from London to New York. You stood in line until you were handed a slip signifying that you were one of the chosen. Who could purchase a ticket for that day’s flight.

That was early this morning. I purchased my ticket and sent Debbie a telegram that I’d land at JFK that evening. Debbie and I had met in Berlin, Germany, 3 years earlier and kept in touch by letters. She and another friend played a big part in convincing me to take the leap to come to the US for college.

Now here I was. The plane landed at JFK. I went through customs and immigration with everyone else and then I was out in the arrivals hall, with lots of people waiting for friends and family coming through the doors behind me. Right there among them was Debbie.

We took the bus from JFK to the East Side Airline Terminal on Manhattan. Debbie had made a reservation for me at a Youth Hostel on the upper West Side. Not that it meant anything much to me. We were in the middle of a huge city. It was dark and I had no clue where we were going. Fortunately, Debbie, while being from Chicago, was visiting friends here and seemed to know her way around. So I trusted her.

There was a taxi nearby and Debbie started talking to the driver. He could take us and swung my backpack into the cavernous trunk.

That’s when they arrived. They being a 30-something couple who wanted a cab right this minute. Definitely not in 2 minutes when surely another cab would come along. There is such a thing as sharing a cab, but it was quite clear nothing of the sort was on this couple’s minds.

As if we didn’t exist, they started haggling with the cab driver about them getting the cab and him just ditching me and Debbie. After all, we were just a couple 20-something college kids. You know, probably hippies. Especially me, with a big backpack. Looking like I was just back from a summer in Europe, trying to find myself. Or something.

Debbie and I looked at each other and wondered how this would play out. My backpack was still in the trunk. These folks seemed quite ready to just throw it out. Except, that would mean having to actually lift. You know, work.

The cab driver did a whole lot of fast talking. The couple did even more. Shortly and in spite of their protests, he ushered me and Debbie onto the front bench seat of the cab. Because, in the midst of all the commotion, the cab driver sensed opportunity knocking.

He quickly started hoisting the couple’s 842 pieces of matched designer luggage into the trunk. All while the woman yelled at him for bumping her precious luggage. Like whatever airline they’d come in on had handled it all with kid gloves.

Quite obviously it was not at all to the liking of Mr. and Mrs. Snooty to share a cab with us lowly college kids.  There were plenty of words used I never once heard in English class back in school. If they’d had their way, we would have walked across Manhattan. Or at least waited for the next cab.

Yet, here we were — all in the same cab. No amount of trying to be nice, like my mom always told me, was going to break that ice. Definitely glad glares couldn’t actually kill.

Our cabbie got into the driver’s seat and promptly put his cap over the meter, announcing:

Before anyone had time to protest, he pushed the accelerator and we took off into the ever busy Manhattan traffic.

And I worried. Because this was not going to end well. I had visions of us all getting royally shafted on this trip. Maybe he’d just stop somewhere in the middle of nowhere. Yes, I knew this was Manhattan and there’s really not any ‘nowhere’ there, but you get the idea.

To this day, I have no idea where all we went. Debbie and I tried to look for street signs when we turned corners, to have some idea of where we might end up. Of course, those signs didn’t mean squat to me at that point.

In the end, all I knew was that the ride didn’t last that long before we stopped at the address of Mr. and Mrs. Snooty. They got out of the cab, angry with the driver. He unloaded their 842 pieces of matched designer luggage, only slightly dented and scuffed. They argued more out there on the sidewalk.

I tried to catch what Mr. and Mrs. Snooty got charged for the ride. So I’d have some idea of what was coming for us. If we ever got to wherever we were going. Which I didn’t know how much farther it would be. But no luck. Too much arguing.

Just had a definite feeling that whatever the amount the taxi driver told Mr. and Mrs. Snooty, it was way higher than a regular fare should be.

Debbie and I were still in the front seat of the cab. She reached into her purse:

I read his medallion to her and she scribbled that and anything else we could see that would identify this obviously deranged driver for when we’d have to file a complaint or police report. Just bolting and running wasn’t really an option, because my backpack was still back there in the trunk.

Eventually the arguing subsided. It didn’t take Sherlock Holmes to figure out that the cabbie had way overcharged Mr. and Mrs. Snooty. Even if you accounted for something extra for their 842 pieces of matching designer luggage.

Finally the cabbie got back into the car and off we went down the street. He seemed no worse for all the arguing that had just happened. Neither Debbie nor I said anything. He grabbed his cap off the meter.

“Meter was working fine all along. But those two were nasty. Tried to steal the cab from you. Then didn’t want to share. But I took care of them.” He gave us a sideways smile. Like we were supposed to feel better about all that had just happened.

Then he started chatting. Friendly-like. It was a totally different person. Asked us what we were planning to do with our time in New York. If we were going to any Broadway shows, as we drove through a rather gritty Times Square and continued up the famous street.

You know, conversation, like you often have with a cab driver. Especially if riding up front. If it hadn’t been for the image of Mr. and Mrs. Snooty getting seriously overcharged for their part of the ride burned on our retinas, Debbie and I might have really relaxed now.

The rest of the trip was actually a pretty nice ride. We proceeded up Broadway to Columbus Circle and further up the West Side and I found myself looking at all the buildings we went by. Maybe this wasn’t going to be so bad after all.

Except who knew what our fare would land on? Maybe he was just making nice now so he could jump on us when it came time to pay the bill.

Eventually we reached our destination on the upper West Side. We paid the cab driver the amount showing on the meter. A reasonable fare for the distance we’d traveled. He got my backpack out of the trunk, no dents or scuffs it didn’t already have. And wished us a good night.

Debbie and I just stood there at the curb, watching his taillights disappear down the street, blending into other traffic. I think it was quite a while before we were both breathing normally again.

Yes, I was definitely in New York. I’d heard plenty of things about the Big Apple — huge, noisy, dirty, crowded, hurried, brash, everyone-out-to-get-you. All seemed quite true. Full of really odd people. This cab ride was forever etched onto my mind. I was 20-something, with lots of travel experience, and nothing quite like this cab ride before.

Looking back at it all from the cab driver’s perspective (and knowing the geography of Manhattan better), I don’t think anyone would have faulted him, had he dumped Debbie and me back at the East Side Airline Terminal. Yes, we were a longer fare, all the way to the upper West Side. But once he dropped us off, it might be a while of cruising back down towards at least Columbus Circle before he’d land another fare. Mr. and Mrs. Snooty were going somewhere in Midtown. Quick ride. Drop them off, collect the fare and extra for the luggage and be back in circulation. He’d probably have another fare before going a block or two from where he dropped them off.

Of course the best of both worlds from his perspective was to combine the 2 customers. Especially if charging each group as if they were the only ones in the cab. With no other cab waiting behind him at the Airline terminal, that would still have been a decent deal for me and Debbie and Mr. and Mrs. Snooty.

Mr. and Mrs. Snooty seemed to do what came naturally to them (it showed that they had lots of practice): Be demanding. Probably got gold stars in assertiveness training too. It just didn’t pay off that well for them. Yes, they got home with all their luggage. But they got the bare minimum of service, at an inflated price. With lots of aggravation.

On the other hand, quite often, asking for help from someone you’d like to do something for you, like this cab driver, and involving that person in the problem solving, will get you amazing treatment.

Like I said, this cab driver could very well just have left us at the terminal. But he did get us to where we needed to go. He helped solve our problem of how to get from here to there. Albeit in a very unorthodox manner. And once the backseat people were gone, it was a pretty nice ride through New York.

In the end, I was far too exited to be in this new country to let that one very strange taxi ride scare me away. It was however only many years later that I learned to love New York City. But that’s another story.