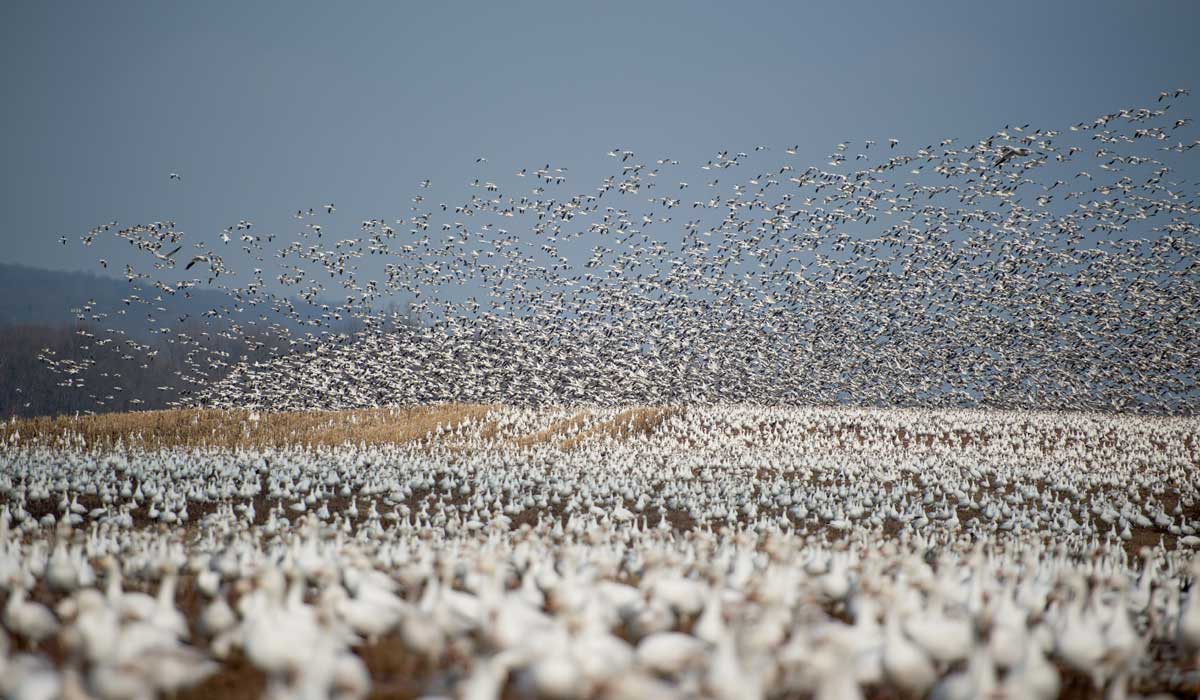 The drive from Little Rock to Memphis is a lot of farmland, a few hills and close to Memphis, floodplain that becomes a giant lake whenever the Mississippi River floods.

Mostly you just roll along, trying to either get around clusters of semis or staying out of the way of other semi-drivers who missed their calling as Indy 500 drivers.

Occasionally, you encounter something unusual along the way though. Like a couple weeks ago when Diane and I headed over to Memphis for the day.

Several fields along the road had huge flocks of white birds in them. Clearly those birds liked what they’d found.

Since I was going 70 down the road and the fields were off in some distance, I couldn’t quite tell what kind of birds those were. My first reaction was seagulls. Except this is 100s of miles inland.

Where I grew up in Sweden, when farmers tilled their fields in spring, they’d be accompanied by flocks of seagulls. Because that freshly upturned soil revealed all kinds of delicious treats, like grubs and worms.

That’s what the scene along the road to Memphis reminded me of. Except way too far inland for seagulls. Also lots more birds in each field than I ever recalled from Swedish farm fields.

A few days later I happened to talk with a friend, who is also a duck hunter. When I mentioned driving to Memphis, he immediately asked if I’d seen flocks of snow geese along the way.

The rest of the story

To me the scenes with lots of birds flocking in a field looked pastoral. Nothing out of the ordinary.

Except those flocks of birds are a major pest for Arkansas rice farmers. Birds descend on flooded fields to feast on young rice plants. A reasonable number of birds will not decimate a big field. Massively huge flocks can do serious damage, especially when they hang out for a long period. Think a multi-day, all-you-can-eat buffet, open around the clock. That kind of damage.

Plus I also learned that the snow geese population has grown so large that the birds are damaging their fragile nesting areas in the arctic tundra far up in northern Canada.

For that reason, it’s open season on snow geese for Arkansas hunters now. All to bring the bird population into more reasonable numbers for their habitat.

Coming back home from Memphis towards evening, we were enjoying the last of a sunny day. Diane looked up and pointed at the sky, commenting about the rainbow. Except it hadn’t rained that particular day. And there were just cirrus clouds in the sky.

I looked in the direction she was pointing. There was a very bright spot, with a short segment of an arc displaying color shades. Bright like the sun, but not the actual sun. The sun itself was at the same height above the horizon, but farther to the left. And farther over on the other side of the actual sun, was another very bright spot. Also with a color arc.

The words came automatically to me: “That’s not a rainbow. Those are sun dogs”

The last time I saw sun dogs, was on a cold, wintry day in Iowa, some 25 years ago. The weather this day didn’t seem right for them. No snow, no rain. It had been a nice, cool, but certainly not freezing day. Sunny for the most part.

And yet, here we were looking at bona fide sun dogs over the horizon.

It truly looks like there are 3 suns in the sky. An awe-inspiring phenomenon. No wonder that at other times in history, people encountered sun dogs and took them as a sign.

An omen of victory

In 1461, during the War of Roses, 2 armies were about to clash in the Battle of Mortimer’s Cross, when 3 suns appeared in the sky. Clearly a sign from God. Except what did the sign mean?

On one side were royal forces, loyal to King Henry VI. On the other, rebels, led by Edward of York.

The question for Edward’s followers was: Did the 3 suns mean Divine displeasure with their effort and presage their defeat?

Apparently Edward had a way with words, as he managed to interpret the 3 suns as a sign that the Holy Trinity was on his side. Bolstered by that “evidence”, the rebels went on to win the battle that day.

Each can appear when the atmospheric and light conditions are right.

That certainly removes the ominous feeling. We’re left with a pretty spectacular display in the sky. Because it’s just not every day you see 3 suns! Many people go all their lives without seeing them even once.

Of course if you don’t know anything about ice crystals and light refraction, seeing 3 suns in the sky is pretty awe inspiring. Which makes it understandable why people would interpret them as an omen.

There is in a famous painting, Vädersolstavlan (Swedish: vädersol = sun dog), depicting a major atmospheric optical phenomenon over Stockholm in 1535. This came during a critical time in Swedish history as the relatively new King, Gustav Vasa, was breaking with the Pope and the Reformation was underway in Sweden.

No wonder people saw the appearance of sun dogs and other heavenly phenomena as an omen. Although if it was a good or bad omen, might depend on which side of the issue you were on. Still, it clearly made an impression. When Sweden issued new bank notes in 1989, they put the portrait of Gustav Vasa on the 1,000 kronor note. Along with a stylized version of Vädersolstavlan.

Both these observations, snow geese overwhelming farm fields and sun dogs in the sky, left me thinking about our understanding and perception of proximity and causality.

The one scene, to me, looked reasonably everyday. Certainly not threatening or like something that was causing destruction. (Although it might have, if I’d just watched Hitchcock’s The Birds.)

Yet, once I knew the underlying facts, what looked so innocent at first, became much more a scene of damage. I now fully understood why there’s open season on snow geese. Because when there are so many birds in a field that all you see is a white mass, it doesn’t take an advanced degree to figure out that serious damage will result. The rice crop will be nothing like what the farmer hoped for and the field was capable of, before the tender plants were ravaged.

On the other hand, that magnificent display of sun dogs — 3 suns and an arc in the sky — certainly stands out. Not surprising that folks in centuries past expected dire things ahead when seeing sun dogs. Or took it as a sign of eventual victory.

Except there’s no causality there. Sun dogs don’t cause cataclysmic events. They’re not a sign of impending apocalypse. It’s a natural atmospheric phenomenon.

But suppose you see sun dogs, never having seen them before. Then shortly thereafter something really bad happens. Wouldn’t you think that the sun dogs were a warning? Seems to make sense.

Event A happend, then B happened. So we assume that A caused B.

But proximity doesn’t mean causality. In other words, just because 2 things take place close in time, doesn’t mean that one caused the other. Or that they are even connected in any way.

Understanding what we see

Back to the birds: I saw a scene that looked familiar and interpreted it with that filter. In Sweden when birds follow the plough in a field, they’re not doing any damage. Certainly the farmer will have no issues with them eating grubs to their heart’s content. After all, grubs cause damage to the crop that will eventually grow there. So anything the birds eat, just helps control a pest.

So seeing the fields full of birds along the road, I didn’t perceive the destruction going on right before my eyes. And I knew nothing of the damage those same birds do to their nesting habitat up in arctic Canada. I had to learn that side of the story from others who were more familiar with the whole issue.

But often we approach issues in life lacking full understanding: We see or experience some of the issue. Grab a few facts that kind of align with what we already believe. Then conclude we have a full understanding. Except we don’t. We just see one slice of a larger reality.

The lesson of the day is about not jumping to conclusions before we have the full picture. And also being willing to adjust our opinion, when additional facts don’t support the first understanding.

Plus not jumping to conclusions about what caused what. Just because things appear related or one the cause of the other, doesn’t mean it’s so.

It’s all also a reminder that we live in a pretty marvelous world. One we definitely need to treasure.