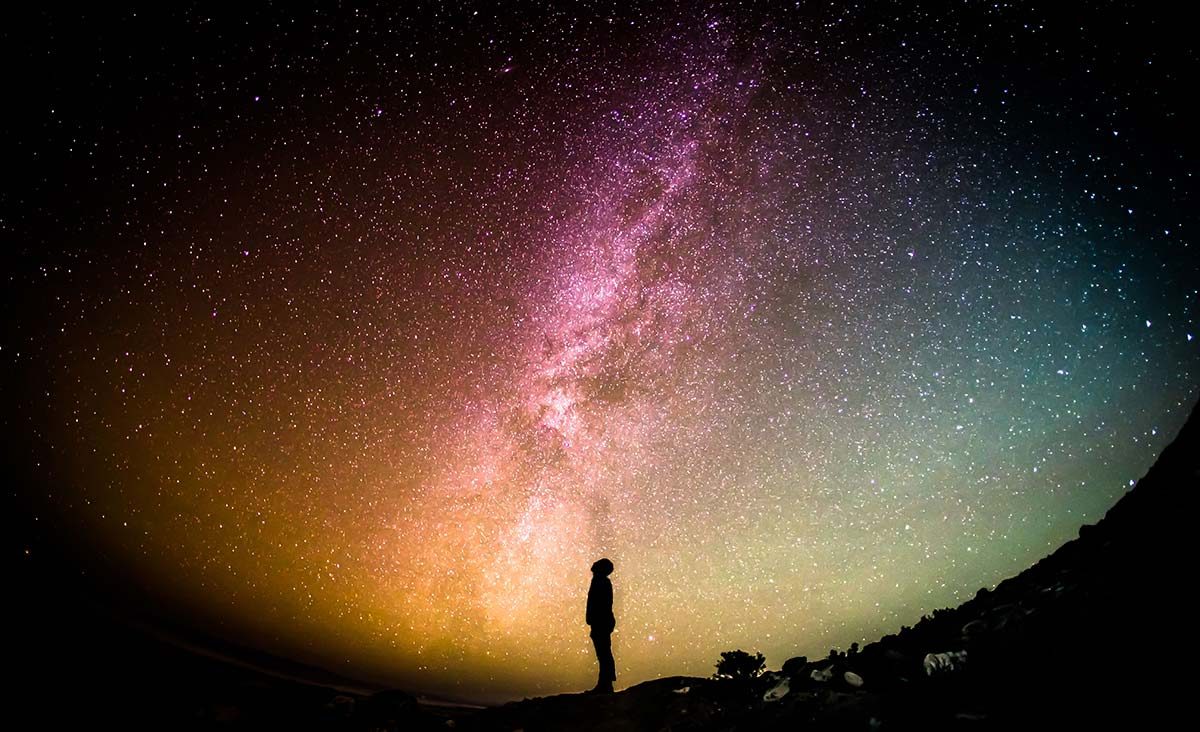 How often do you stop and look up at the sky at night? Quite possibly not that often. Because we tend to be in a hurry to get home. It’s dark. And there’s nothing to see up there anyway. All black.

When we live in a built-up area, that’s pretty much it.

I can go out into the street by my house at night and look up. I’ll see sky beyond the many trees. Probably the moon, if it’s out and not hidden behind some tree. I might even see a few stars. Tiny pinpricks on an otherwise pretty black background.

Just a reminder that there are stars up there. At least a few.

I might also see a spot of light, flashing and moving rather fast across the sky. An airliner passing high above. Around here, that’s almost as common as seeing a few stars.

“For my part I know nothing with any certainty, but the sight of the stars makes me dream.“

A while back, Diane and I were at the Amana Villages in Iowa. It’s a 20-odd minute drive from the metro areas of Cedar Rapids and Iowa City. Enough to be a rural area. One night while there, on the way back to the B&B we were staying at, I turned onto on a gravel road, going out among farm fields. Diane wondered where we were going. I asked her to be patient for a minute or two.

A mile later, I stopped at a field entrance and we got out of the car. Beyond the eastern horizon we could see the light from Iowa City shining up into the sky, like some giant bubble over the metro area. If I was lost and trying to get back home to the city, I’d have no trouble to figure out which direction to go in.

But we were not lost. We were gazing up into the sky.

To see stars. Lots of them. With ever more popping out as our eyes got used to the darkness. Suddenly there was depth in the sky. What so often seems like a black sheet with a few pinpricks of light, was now full of stars. Of various sizes and brightness.

It was the first time in a long time that I recalled seeing not just a handful of stars in the sky, but lots and lots of them. And actually seeing the Milky Way.

“We need to find God, and he cannot be found in noise and restlessness. God is the friend of silence. See how nature — trees, flowers, grass — grows in silence; see the stars, the moon and the sun, how they move in silence… We need silence to be able to touch souls.”

In ancient times (like anytime before radios, radar, satellites and GPS), stars were incredibly important for knowing where we are. Ships relied on them for navigation. Even travelers on land counted on them.

Because you can’t really get lost if you know where the Pole Star (North Star or Polaris) is in the sky. At least if you’re in the Northern Hemisphere.

If you’re “down under”, you can use the constellation of the Southern Cross and find due south with just a little calculation.

“The stars are the land-marks of the universe.”

Sir John Frederick William Herschel, Essays from the Edinburgh and Quarterly Reviews with Addresses and Other Pieces, 1857

Connecting to the Universe

The time under the starry sky made me feel a whole different connection to the universe than I get from a quick glance up at the sky while walking from the car to the front door on an average night.

It made me realize just how much is out there. How vast the universe is. Which makes the Earth all the more unique. This one place where life as we know it exists. One tiny speck in the entirety of the universe. Each of those pinpricks up there being a star like our sun. Many no doubt with planets circling around them.

The awesome thing about a really starry sky, is that we can, for the most part, find places to see it without going all that far. Just have to get out of metro areas. If you’re in New York, Chicago or LA, that can indeed involve going some distance. In many other places, the travel needed will be quite modest.

But definitely worth it.

“Look up at the stars and not down at your feet. Try to make sense of what you see, and wonder about what makes the universe exist. Be curious.”

While we’re on the topic of wonders in the sky, there’s also the Northern Lights. Aurora Borealis. Don’t see that at all in Arkansas.

Southern Sweden on the other hand, is far to the north. Growing up there, I saw them regularly during the darker part of the year. Especially on really cold, clear nights.

When the sky fills with a display of lights in ever changing patterns, it’s enough to make you forget that it’s well below freezing outside. You just stand and watch in awe and wonder. Beats any lightshow I’ve seen entertainment folks put on.

When we lived in Iowa, we saw the Northern Lights on rare occasions. One time as church evening service had just ended, our pastor (who hailed from Minnesota) came back into the church foyer quite excited, telling everyone to go outside into the parking lot.

As we stepped outside, we were rewarded with a gorgeous display of Northern Lights. First time for many who were there.

The wonderful spectacle of lights in the sky, like giant curtains, is as if the whole world has become a stage for some cosmic light show. Slowly changing, waning, intensifying, moving across the sky. It’s not just the colors in the night sky, but also the movement.

I see why people travel to places above the arctic circle specifically to experience the Northern Lights.

She lifted her head in surprise, following his line of sight above the tree line. Beyond the distant peaks, a green and blue symphony of lights had begun. It rippled and shimmered like sunshine on water, leaving Rich blinking back tears. He’d read something about this but had never seen it before.

Times like that remind me how wonderfully uniquely created our universe and world is. You might say I don’t have enough faith, but I can’t see how this all would be here by chance. Everything fits together far too well to have happened just by randomness. Somebody designed it. Created it all.

The heavens declare the glory of God; the skies proclaim the work of his hands. Day after day they pour forth speech; night after night they reveal knowledge. They have no speech, they use no words; no sound is heard from them. Yet their voice goes out into all the earth, their words to the ends of the world.

All too often we take the world we live in for granted. Assume it’s always going to be there. So why pay any much attention to it? Besides life gets busy. Things to do. People to see. We’re in charge. Make plans. Set schedules.

“If the stars should appear one night in a thousand years, how would men believe and adore; and preserve for many generations the remembrance of the city of God which had been shown! But every night come out these envoys of beauty, and light the universe with their admonishing smile.”

Our spot in the universe

When experiencing something like a Northern Lights display in the sky, or gazing out into a universe filled with stars, solar systems, galaxies far, far away, all that daily busyness somehow becomes less important. Because it’s realizing that I’m a very small part in this grand universe. A truly blessed part, to be alive and have everything that I’ve been given. But still a very small part. Even the most (self-)important people of the day are truly minuscule parts of the entire universe.

The experience makes me so very thankful to be alive. Right here, right now. And grateful that I get to experience the beauty of the heavens every so often. The Northern Lights may not be within reach for everyone, but we can all take time to gaze up at the sky on a clear night, preferably away from lights on the ground. To watch the heavens declare the glory of God.

It makes me thankful. And also wanting to be sure to take care of the world I’m living in. For those who come after.

“No sky Leila had seen before could compare to the beauty she was seeing above her. It didn’t feel like some accident of nature but rather something that was purposefully unleashed on the world.”

The Aurora Borealis makes for great pictures. But to really grasp the splendor of it, you have to see the motion. Here are 2 video spectaculars:

Intrigued about the Northern Lights? To learn more, check out this video on YouTube.