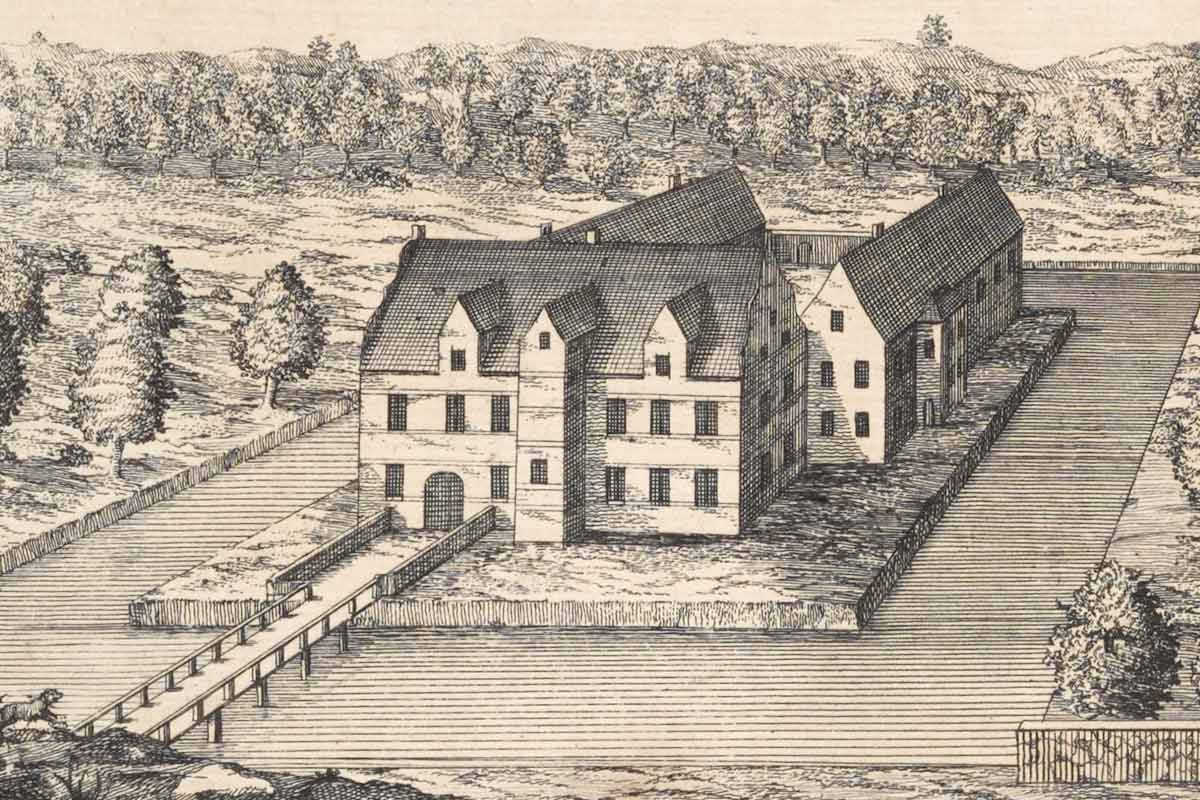 My new office was in a real medieval castle. With a moat. That you crossed on a bridge to walk under ancient arches into a small courtyard.

It was the kind of location you only dream of and this seemed like the perfect job. I was joining an aspiring production company to create programming for national and international television. Plus plenty of corporate videos.

So how come I walked out across that idyllic moat for the last time just a few months later? Leaving it all behind.

The guy who owned the company. And considered himself a Divine Gift to humanity.

But it didn’t start badly.

The Company was a small production company with BIG plans. Which is why The Boss not only hired me, but also a full-time marketing person at the same time. Because The Company was going places.

Up to this point, The Boss had been video and film producer, as well as chief marketer, all in one. But now things were going to change.

So here I was. Ready to take on the world.

Getting started in the new job

For my first few client meetings, The Boss came along. Which I appreciated. I was after all a new video and film producer and he had decades of experience.

I did wonder though when one day, as we were already late to a client’s office, he insisted I drive around the block a couple extra times, just so he could properly curl his mustache.

Clearly I had something to learn about the importance of keeping up appearances!

Soon I was deep into production, working hard to get everything right. But often with a feeling like someone was looking over my shoulder, just waiting to catch a mistake.

There was The Big Car Company Commercial Shoot. The Boss had negotiated that. His script called for a location shoot in North Africa. Because the light and color was better there than at home.

A week before the shoot, he casually told me that he really had intended for me to go on that shoot. What? That was the first I heard of it!

But he didn’t feel I was ready. So he went instead.

He was gone for over a month.

With The Boss gone, everything in the office seemed to flow so much smoother. There was casual chatter and everyone was excited about doing their work.

We also began brainstorming ways to drum up new business. Because the projects The Boss envisioned (and we all really wanted to do) would take months to materialize (and pay off). But inside that ancient castle, we had a very modern video post production facility. That cost money, whether anyone was producing video or not.

A key to our plan was to find ways to do more marginal and lower end work without diluting the high end brand of our production company. Projects that would bring in money short-term. We had it all figured out, including marketing and positioning.

It was all about making maximum use of production and editing equipment and our team’s skills.

It all came to a screeching halt when The Boss returned from North Africa and The Big Car Company Commercial Shoot.

Reality check and it’s not good

The first day back, The Boss called us into his office. One by one.

I later gathered that the visits all followed the same script: What have you done here while I was gone?

Invariably, whatever that was, it was not enough. So we were all about to be fired, because clearly couldn’t be trusted. If he’d been the Dread Pirate Roberts, he’d have promised to definitely kill each of us in the morning. At first light.

However, IF (and that was a big “if”) the person could improve 1000% between this conversation and the next meeting a couple days later, then all would most likely be well. Probably.

I came out from that meeting convinced that clearly I’d totally missed the mark and needed to work like crazy for the next couple of days to show that I could indeed do good work. Didn’t help that this coincided with my 90 day review. The one that decided if I’d permanently be working in the medieval castle.

A few days later I was back in The Boss’ office. I laid out the 10 (count ’em) TV program concepts I’d created. A mix of educational, documentary and fiction programming. One page pitch, project detail, resources and locations needed, ideal audience, rough budget and production timeline. The works.

The Boss reviewed each concept in turn.

When done, he declared that this was at least a 400% improvement. There was however a ‘but’. He was still not quite sure about making things permanent. So he proposed another 90 days of provisional employment. At the provisional salary. Then we’d talk again. He was sure I’d be up to snuff by then. Very promising indeed.

But it’s my dream job

Here I was, my first real job as a film and TV producer. I hadn’t expected it to be all fun and games. Because we all have to pay our dues. But something didn’t feel right.

I recalled other staff members telling how The Boss would randomly chew out or otherwise piss off clients on a fairly regular basis. Then the Longtime Assistant would have to get on the phone and grovel to get the client back. Which tended to happen. And everything was good.

Clearly he handled his staff the same way.

The others in The Company had worked for The Boss for a long time. Groveling on his behalf seemed to be an accepted part of “all other duties as assigned”. As was having a nearly constant threat of being fired hanging over you.

I’d first met The Boss several years earlier when he had a large photography studio downtown. Then when I went to interview, I found out it was a small team doing video and film based outside the city. Maybe I should have asked how come the business had changed so much. But then that’s what businesses do: Change.

Now I began to wonder if there was a more sinister reason for why it was now a small company in a castle in the country.

But this was my dream job. In a medieval castle. With a real moat. Surely I was overreacting.

You don’t just up and quit your job when you are the sole breadwinner for the family. With nothing else on the horizon. Plus there was the nagging feeling that if I did quit, The Boss would talk and then nobody in the smallish regional production community would hire me. Those things happen.

Competition or together we’re better

In the end, after prayer, soul-searching and counsel, I concluded it wasn’t worth it. Because this was the trial period of employment. Sort of like dating — you’re definitely on your best behavior. So if it was like this now, it wouldn’t get any better a year or 5 or 10 from now.

And so I walked out through the castle gate, across the bridge over the moat, for the last time a week or so later.

But I’ve never forgotten those months working in a real medieval castle with a moat. I actually really liked and got along fine with everyone there, except The Boss.

Only much later did it occur to me that maybe I was a threat of sorts to him.

He wanted to expand the business. Which is why he hired me. To be another creative video and film producer in The Company.

Up until then, he was the Creative Star. What if I turned out to be more creative than him? Ouch.

That wasn’t even an issue to me. I saw an opportunity to work with someone with decades of experience in the business. To learn from him. Together he, I and everyone else in the company could create things more awesome than any one of us could do on our own.

That was clearly not The Boss’ vision. As much as he needed help to grow the company, I was competition.

The new marketer was only a little competition. Because while he did marketing, he didn’t do the creative. And the other staff members were effectively all in support roles, either running the office or crewing on productions.

But I was there to be creative and dream up new projects, as well as connect directly with clients. That’s either radically increasing capacity for The Company or competition.

It was the Big Car Company Commercial Shoot that settled it for me in the end. Because while I was with The Company, I experienced 2 very different environments: When The Boss was around and when he was not. It was like night and day — in how things worked in the office, how client interactions went, project progress, the level of creativity.

Because a constant atmosphere of chaos, suspicion and the words “You are the weakest link. You’re fired!” hang around every corner will never be a productive workplace. Everyone will either be protecting themselves as best they can or focusing on finding a job elsewhere.

Maybe I could have tried to stick with it longer. Hoping to not get fired at my next 90 day review.

I might even have reasoned that The Boss would change and mellow out as The Company grew. Yet somewhere deep down, I knew that wouldn’t happen. Even if his behavior ultimately drove The Company into the ground.

Because while The Boss loved to appear cultured and refined, he ran things by fear and bullying. Regularly crossed the line with staff and clients. Not even remotely on his mind to lead by good example or by being a servant.

I concluded that was not for me. If I stayed, I’d lose my creativity and who I was, my integrity, one compromise at a time.

So we parted ways.

Staying might not have been quite a Faustian bargain, but would have been too close for me. I wasn’t looking for a line in the sand, but I found it. And this experience did help me know how to deal with work related challenges at other times in my career.

I don’t know what eventually happened to The Company and The Boss. Only that several years later, I saw in a business directory that there was still a video production company in that old castle. However, with a different name — a national company with multiple offices. Maybe The Boss sold out to them when his big plans didn’t pan out?

By then I was working in video and film production doing international and ultimately award winning work. Life was good. And I didn’t have to call clients to apologize for The Boss.

If you’ve worked for a Bad Boss, how did you handle it? How did it end?

What makes a good or bad Boss?

Where do you draw the line on how crazy or toxic a work environment has to get before you decide to leave?

4 thoughts on “The dream job”