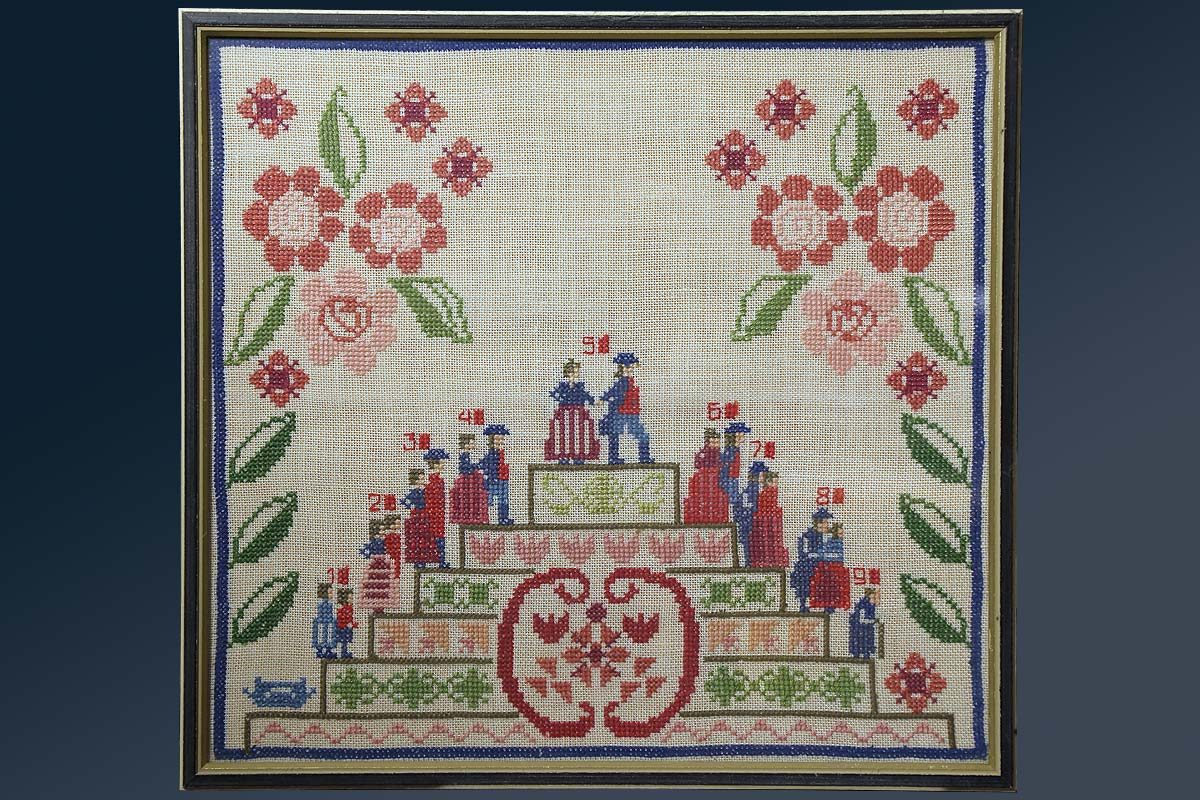 I have an embroidered picture that shows the ascent and descent of life, by decade. How we go through life and eventually pass away. My grandmother embroidered it.

Each time I see it, it’s a reminder of her. But also of life’s temporariness — of how short our time on earth is. And then we’re gone.

We each have so many years (which we don’t know up front) and then we’re done.

“It’s not enough to have lived. We should be determined to live for something.”

To live or to exist

We do have a choice for those years on earth: we can live them or we can exist.

To live them meaning participating in life, shaping it. Diving in and being active in life, in large things and small things.

To exist implies doing the minimum required each day. Not really engaging. Mostly just complaining about the state of things. Kind of float through, not making waves. In the end, barely noticed.

Must have left my house at eight, because I always do
My train, I’m certain, left the station just when it was due
I must have read the morning paper going into town
ABBA in the song The Day Before You Came

Or we can live life throughout our lifespan. We can engage with the world, connect with others. Help, encourage and grow life around us.

“Musicians must make music, artists must paint, poets must write if they are ultimately to be at peace with themselves. What humans can be, they must be.”

I know, it can sound terribly simplistic: One is selfish, inward focusing. The other a do-gooder, always thinking of others first and certain to get a prize for being the most unselfish person that century.

In other words, we can be Henry F. Potter or George Bailey. (To go with an It’s a Wonderful Life theme.)

Except even that contrast doesn’t quite hit the mark. Because Henry Potter was quite driven. He didn’t get out of bed in the morning going “I’ll just chill today and float along.” He was focused on becoming, and then making sure he stayed, the richest, most powerful, man in town. That takes a lot of effort.

“The human race is a monotonous affair. Most people spend the greatest part of their time working in order to live, and what little freedom remains so fills them with fear that they seek out any and every means to be rid of it.”

The tale of Frederick

There are also people like Frederick (not a real name, made-up person, to illustrate a point):

He gets up in the morning, goes to work, does his job (mostly). Goes home at night, does family things and goes to sleep. For decades. Then work is over. He is told it’s time to retire. They even throw a party to send him off.

Now he’s retired. He’s saved up some money, so might travel a bit. Or maybe not. Because going off to foreign places would just be terribly inconvenient and the food’s probably pretty bad.

Better stay around home. There are grandkids, but let’s not get involved. Because Frederick is glad his own kids are grown and gone. Although rather grumpy about them no longer paying attention and listening to him. Grandkids are noisy, disruptive. Full of impertinent questions. Besides, they represent a world that has moved on.

Sorry if that sounds a wee bit depressing, but seriously, there are many folks like Frederick who go through life and wonder what the point of it all was. They came into the world alone and leave it alone. Not much missed and whatever they did accomplish probably has already been replaced with newer accomplishments.

There are two great days in a person’s life: the day we are born, and the day we discover why.

The tale of living

Living is also about getting up in the morning and going to work. Because we all have to make a living. So there are lots of days to get through. What matters is what we do with those days. The person pursuing life is looking for points of connection in each day: How can I connect with and interact with another person in a meaningful way? That will leave one or both of us better off?

How can I at the end of today, leave the world around me (the little slice that I interact with) better off? How can I brighten it a bit for myself and for those around me? What can I do to help and encourage those around me?

There may be absolutely no benefit for me visible in that process. That’s kind of the point: Doing things that are good and right for others, without just thinking about how it can benefit me.

Reminds me of a sales training I went to. Because we expect sales training to be about how to convince the mark (sorry — prospective customer) that they desperately have to have Widget X when they really don’t need any more widgets at all. But we want to sell so we make the money. Because that’s what it’s all about.

Except, as this particular sales training went, it’s not. Rather, it focused on helping a prospective customer figure out what they really need (if anything at all) and then getting them that. Which may even be something I don’t sell. But maybe I can get them in touch with somebody who does. A version of Miracle on 34th Street where Macy’s told their customers where to go find items they didn’t have.

Counter-intuitive to be sure. Because what am I going to get out of it? I have to eat too.

It sounds awfully cliche, but there’s a lot of truth in “no man is truly alone who has friends.” We might deduce that it’s all about being popular and having lots of friends. So lots of parties and lots of spending to get people to hang out with you. But it’s really about true friends: The ones who will be there when there’s a need.

And we may not even know who they are.

My mom was raised in a small town in Sweden. She moved a handful of times, but basically lived her whole life in a 20 mile radius. Her big adventure was traveling to the US for Diane’s and my wedding. She declared that was a wonderful trip, but it was then up to us to come see her. She was done traveling far and wide.

She didn’t have a huge circle of friends. She did stay closely connected with her family and friends though.

Even so, her influence is felt far away from where she lived today. Because she helped shape me, my wife and our daughter into who we are today. Her name isn’t on a big building, so eventually nobody will likely remember her where she lived. But it’s in the end not about having your name on a building or road. In fact, we drive down roads and streets every day that are named for somebody and we have no idea who that person was or what they did that got a thoroughfare named after them.

“The best way to lengthen out our days is to walk steadily and with a purpose.”

The girl in the wheelchair

I was visiting a friend who’d retired after many years providing services for disabled college students. She’d told me a bit about her work and I instinctively knew that it was important and could make a huge difference as to whether a student even got a college education or not. And what the whole rest of their life became.

I just didn’t realize how big of an impact, until we were walking downtown and a young lady in a wheelchair came by. My friend talked with her for a few minutes and after she left, explained that the young lady was a student she’d worked with.

Watching the exchange between them, it was so clear that the young lady was excited about her study progress and what that was equipping her for. Maybe she was just really self-motivated. But just as likely, my friend had helped her along, encouraging her, setting her up to succeed in studies, while grasping a vision of a whole life ahead.

“The purpose of life is to contribute in some way to making things better.”

Life is a funny thing. It seemingly comes with no instruction manual. We’re just thrown into it and get to figure it out as we go. But we make choices all through it. We can hunker down, do as little as possible, collect the gold watch (if we hang in long enough and it’s offered), retire and sit on the sidelines, watching life ebb.

Or we can be active participants at every stage, doing what’s in our power to make things around us better. I can’t fix all the issues in this world. But I can fix a few.

We can settle and kind of slide through. Or we can engage with life. Connect and be part of something much bigger than ourselves.

In the end of course it comes down to what we believe the meaning of life is. If we really think there’s nothing more to it than that we’re randomly born, live and die, then settling and being Archie Bunker for 70 or 80 years is … well, honestly, still pretty miserable.

It’s not over until…

And if there’s more to it. If it really isn’t over when we die. If dying is completing one stage of being and moving into another, then we have quite possibly just wasted a key stage if all we did was exist while here on earth. If we didn’t engage with life.

“The purpose of life is not to be happy. It is to be useful, to be honorable, to be compassionate, to have it make some difference that you have lived and lived well.”

The Bible talks about laying up treasures in heaven and it’s always in terms of how we engage with people around us here and now. Maybe there’s really something to that. Something worth exploring and even changing how we live now for. Because 70, 80 or 90 years can seem like a really long time. But it’s nothing compared with an eternity where we regret not having spent those fleeting years more wisely, more connected with others, more focused on improving life for those around us and thereby, quite incidentally, for ourselves.

You have searched me, Lord, and you know me.
You know when I sit and when I rise; you perceive my thoughts from afar.
You discern my going out and my lying down; you are familiar with all my ways.
Psalm 139:1-3

“It is not that we have so little time but that we lose so much. … The life we receive is not short but we make it so; we are not ill provided but use what we have wastefully.”

Lucius Annaeus Seneca, On the Shortness of Life