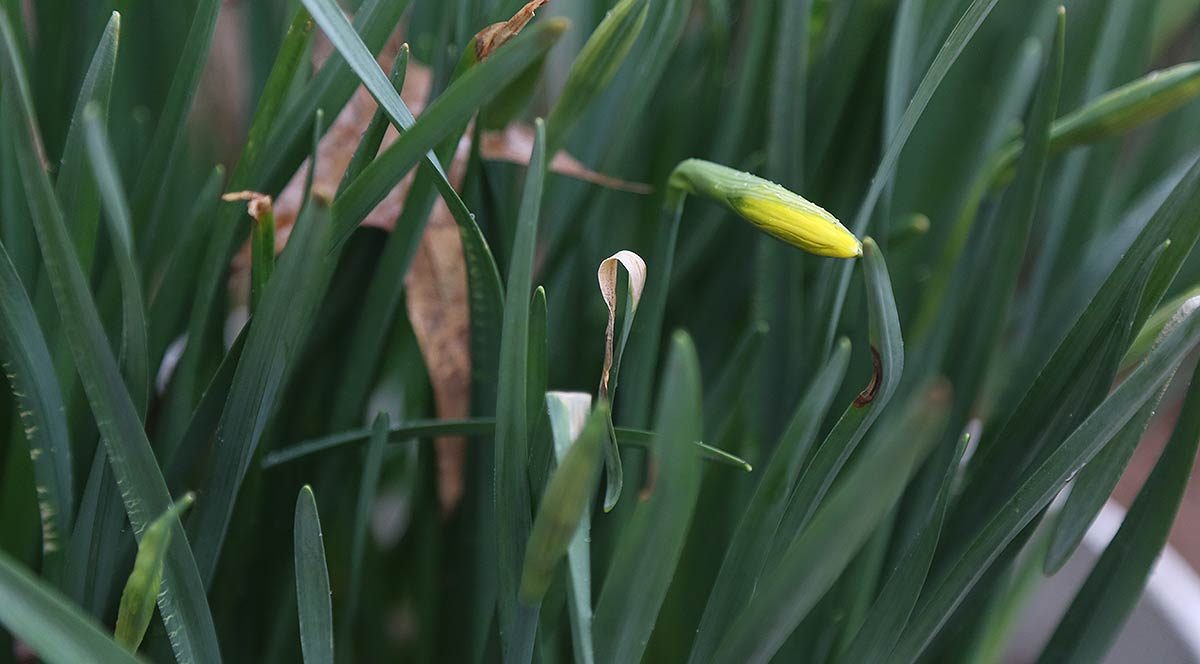 Outside my front door, daffodils have been slowly poking green shoots out of the old leaves for a long time. When there was frost on the ground and even snow, it seemed like a losing proposition. Like someone sent them the wrong cue and they were way too early. Surely those tender greens would freeze off and die.

They didn’t. Instead they grew thicker and more were added. Then some ends started to bulge just a tiny bit.

Finally a few days ago, I walked outside and there among the green were flashes of yellow. Flowers had opened up. Spring is here.

I know it’s still only February. The middle of. But that burst of color shouted “Spring” to me like nothing else could.

Spring is an exciting time of the year. Winter is over. Nearing its end. Still hanging on for dear life. Take your pick depending on how optimistic you feel. Or depending on where you live and what this particular day is like.

It’s not unusual to have a very spring-like day in winter with the sun shining, snow and ice melting, dripping to the ground and the earliest of flowers coming up (maybe snowdrops). The air feels fresh, clean and the world is full of opportunity.

Then the next day it’s biting cold, maybe more snow or fog coming and that hint of spring feels a million miles away.

As I look around my yard, I see all the bunches of green stalks with bulging ends. They really stick out among all the brown leaves and dead grass. In a another few days, we will have an explosion of color here. Spring will be here, whether it’s still February or not! 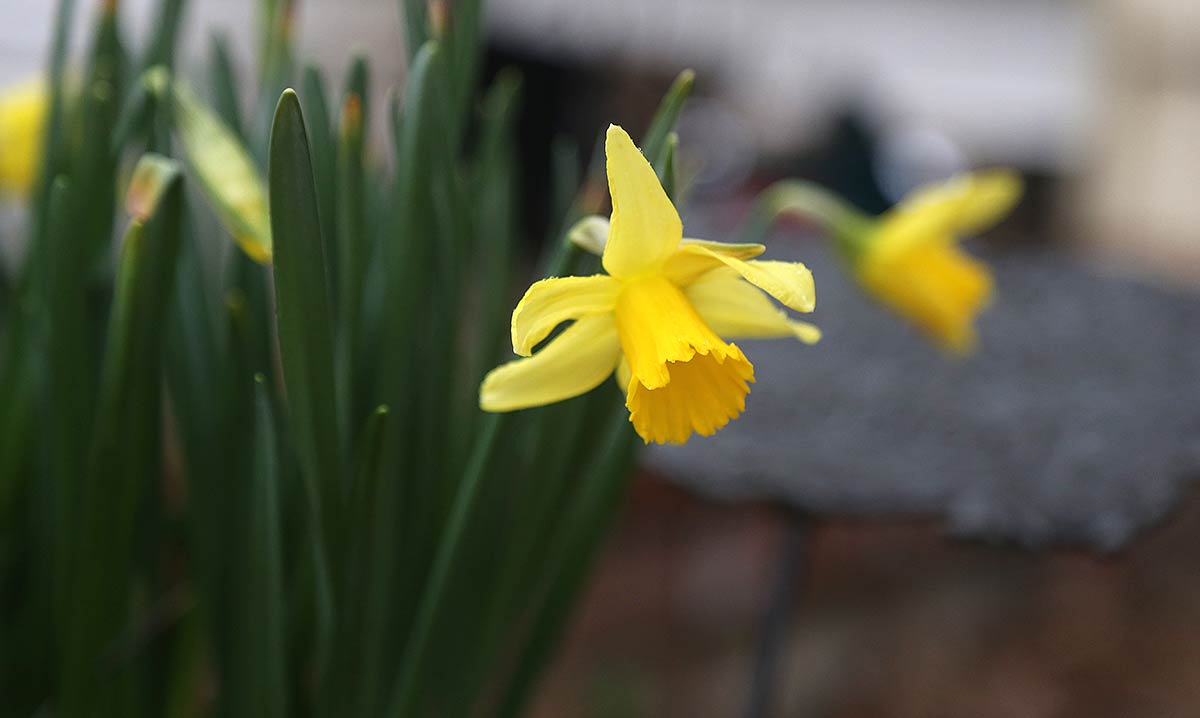 Spring is the season for new growth. Over winter the world seemed dead. It was at least dormant. Now things are starting to bud and grow again.

Soon it will be time to plant, which brings us to a paradox: To grow a new bounty for harvest, we first have to give up and bury the seeds.

If you lived on a farm 100 or 125 years ago, spring was the time of year when you had the least amount and variety of food. You would have been eating off last fall’s harvest all through winter. The larder and cellar getting bare now. And as yet, nothing new was being produced.

On the farm there would be a bin of grain. Some was used for making bread and other food. Some for feeding the animals on the farm. And some was to be for seed to be planted in spring so there would be a new harvest.

But what if the bin was almost empty after a long and hard winter? Do you feed the hungry people on the farm or take that grain to bury it in the ground? Hoping and praying that the weather will be right all season so you’ll have a plentiful harvest come fall and a year from now won’t be facing the same question: To eat now or to plant for later harvest?

Instant gratification or delayed reward? A little for certain now or the potential of much, much more later?

Let’s assume you planted the grain. Now we get into another issue: Will it grow and yield a harvest?

Jesus told a parable of the sower, who went out to plant his grain. (Matthew 13) Today we have machines to do that work for us. But in Biblical times, it was definitely handiwork.

In the garden, we plant seeds by making a small indent in the ground, dropping the seeds in a tidy row and then covering them with soil. Before machines, farmers planted grain by hand scattering the seed across the ground. They might then go back and rake it in to get those tiny seeds covered. But not before birds got to some of them. So some seeds are gone right away.

Then if you scatter seed by throwing it out, some will land in places that are not ideal for growing – on a hardened path for instance. More for the birds.

Other seed lands among rocks. (Living in Little Rock, I know all about rocky soil.) The seeds sprout quickly, but the little plants don’t last, for the soil is shallow and roots have a hard time going down through rock.

Some seed lands among weeds. Now the competition is on. But weeds have this ability to choke out the plants we really want to grow. (That’s why we call them weeds.) Not going to have much harvest in that spot, unless you fancy a bundle of thistles.

Still other seed lands in the good soil where it can send roots deep and grow strong enough to withstand wind and rain and eventually produce a bountiful harvest. One little kernel will have produced hundreds of new kernels. Maybe enough to make a whole loaf of bread and then some.

We often hear the parable of the sower and focus all on how the seed landed in different kinds of soil and grew or didn’t. And that was the point Jesus spoke to, painting a picture of how we respond (or don’t) to God’s word.

But the story brings up another point as well: What if the sower instead of going out and planting the seed, stayed home and did nothing? Or even baked bread with the grain?

If we take some of the precious grain and sow it (bury it in the ground), it will likely sprout and grow to produce harvest of some multiple.

If we don’t sow, we know there will be no harvest. And it won’t take us that long to use up the grain we didn’t sow. Then what? No prospects ahead.

Which would you rather do?

Looking at the daffodils bursting out in my front yard, noticing more of them every time I go out the door, I enjoy the coming of spring and look forward to what seeds I can plant, in friendships, family, hobby, and business. If not now, then when?

Then a harvest can follow at a future point. But today is about flowers, fresh air and lots of opportunity. Blue skies!

Reflection:
Is there something you have wanted to do, but haven’t actually moved forward on? What might happen if you plant a seed towards that something this spring? What could the harvest look like come fall? 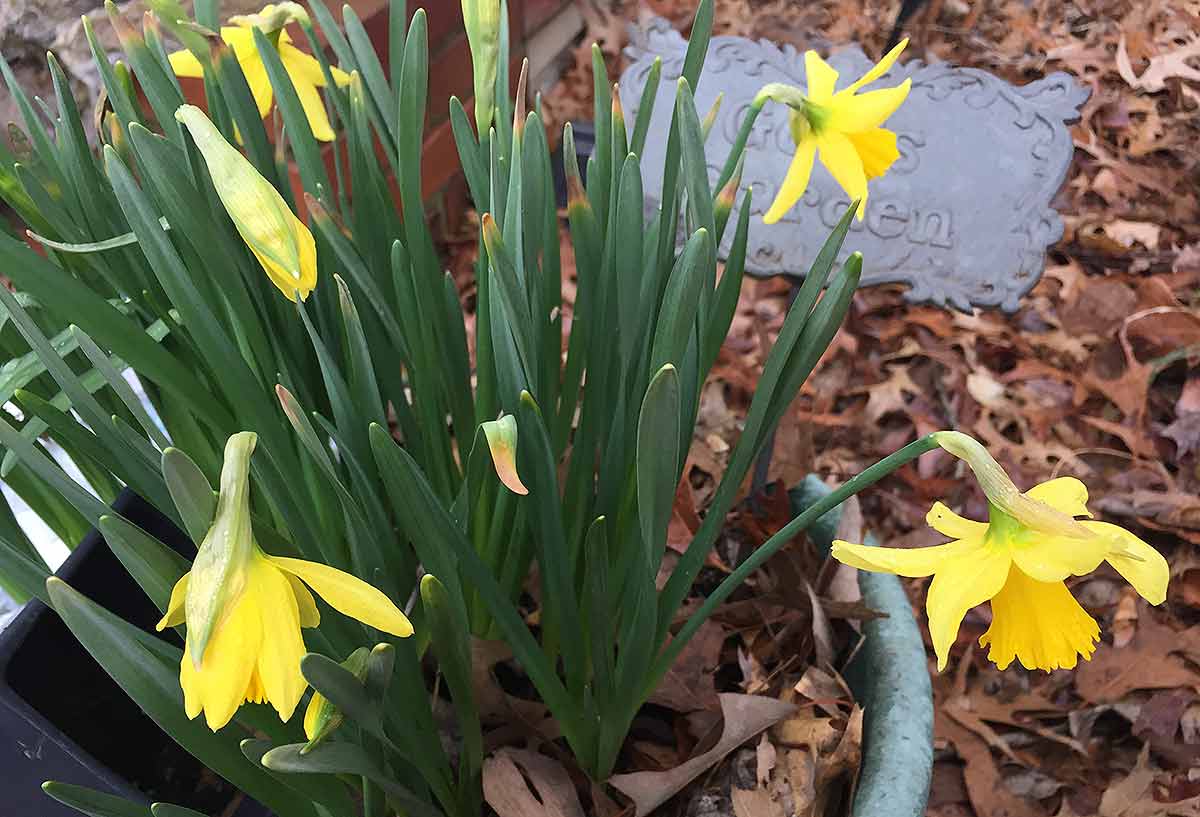