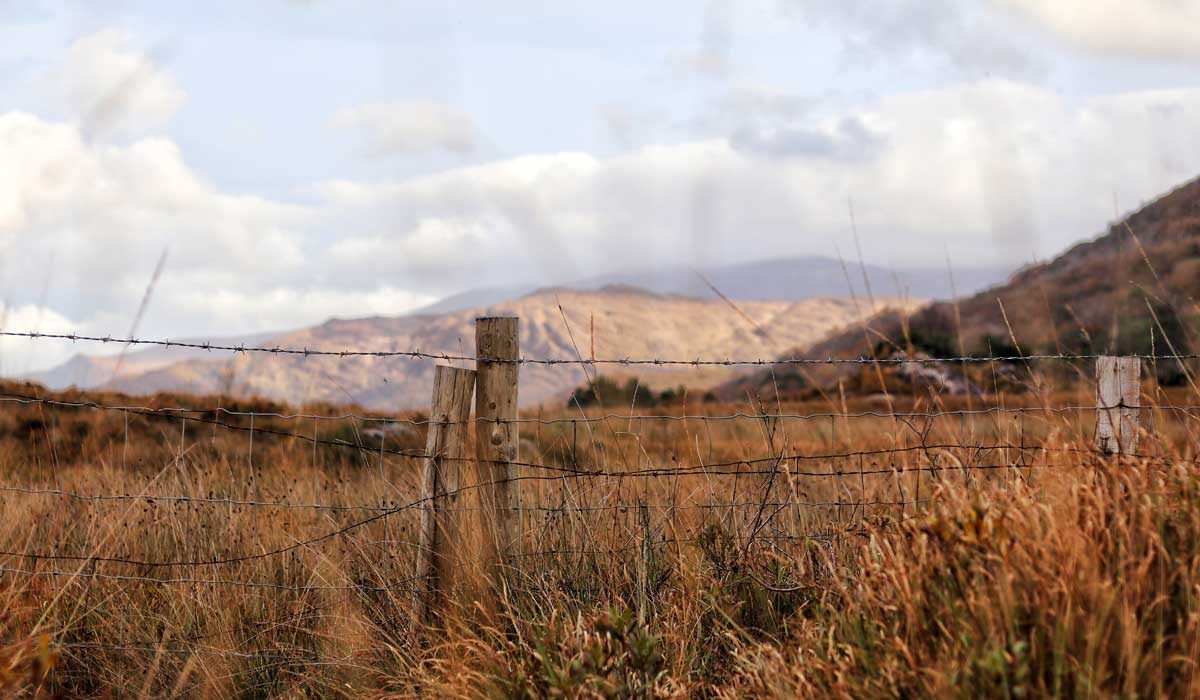 The long cattle drive had been like countless others. The trail comprised seemingly endless miles of sun scorched prairie. Days went by and the horizon was still only a line, without any signs of civilization. It was as if the land continued forever, never changing.

The herd moved in early morning and late afternoon. The men took a break at noon, letting the cattle rest as best they could while the mid-day heat passed.

It was a smaller-than-usual herd that the five men were taking north and east to the railroad. Only a few years before it would have been much larger and the end of the trek would have been farther away, farther east.

Thaddeus Jones, the foreman, often took cattle all the way to Abilene in his younger days. There was even that one time he drove the cattle clear to Kansas City.

Not so this time. All they had to do was to deliver the cattle at a railroad depot in a nondescript town far out on the prairie. From there a freight train would take over and in a matter of days bring the cattle to the stockyards and meat markets in Kansas City or Chicago.

The herd was still following the trail that wound its way up and down rises in the prairie, when Thaddeus, who happened to be bringing up the rear, was jolted out of his daydreaming. The herd had stopped. Quickly he rode up front to find out what was the matter.

“Take a look at this.” Jeb, one of the men up there, saw him approach and pointed to the object that stopped the cattle. Thaddeus reined in his horse and nodded silently.

Across the open range, as far as they could see for the rolling hills in any direction, was a line of short poles, between which were fastened three parallel rows of metal wire with sharp pegs protruding from it.

“Goin’ as far as a man can see,” somebody else noted.

Thaddeus Jones dismounted and went up to wire. He tested the strength of the wire by pushing with his boot, only to find it gently yield some to pressure, swinging back as soon as he lowered his foot. There was no mistaking that the wire had been put up recently. Marks of the trail could still be clearly seen on the other side of the fence, leading toward the horizon.

Thaddeus held the wire in his hand, touching the sharp barbs with his thumb. Sharp enough they could prick even the tough skin of the beef cattle raised on the range.

Then he turned towards the herd of cattle. The beasts were milling around in uneasy confusion, waiting for what would happen next.

“Cut it.” He mounted his horse. “Cut the wire and let the cattle through.”

Another night went by on the range and then they were at last approaching the small town, nestled in a shallow valley. From the rise, they could see the town and in it, the train depot.

The closer to town they moved, the more barbed wire fencing was in their way, until they finally found themselves driving the cattle along a rutted road, lined with fences on both sides. One of the cowhands spoke the question that was on everybody’s mind:

“What’s all this fencin’ business about anyway? Why’s the land all fenced in?”

Several miles of the road were lined with the barbed wire. At regular intervals fences would go off at a straight angle to the road. They passed through this eerie country in silence, all knowing the answer, but fearing to be the one to speak doom upon themselves.

The agent at the train depot had no such qualms and gave his opinion freely:

“Ain’t seen guys like you fellas for the longest time. Reckoned there weren’t no more of you around. This land bein’ all fenced pasture and feedlots these days. The open range’s goin mighty fast, let me tell you that.”

The group of cowhands looked at him with the stupor typical of someone who has just had confirmed what he feared and knew was true, but did not dare believe. Because it would forever change everything.

“If you pardon me askin’,” Thaddeus Jones finally said. “How come you’re so knowledgeable in these matters? Seein’ as you’re not the kind of man likely to ride out on the range, bein’ occupied with the freight business and all.”

The agent slid his glasses to the tip of his round nose and peered over the rim at the dusty group, displaying his complete superiority of learning.

“As the agent of the Railroad in this town, I am in charge of both incoming and outgoing goods.”

“In other words, I know there’s been enough barbed wire coming in to fence the whole county and then some.”

He eyed the men, watching the weight of his words sink in.

“Quite frankly,” he continued. “If I were you, I’d look around for another job. They ain’t gonna need no more cowboys pretty shortly.”

“So this is the new West.” Thaddeus Jones had gone for a walk away from the pens by the train depot and found his way to a place where a man was putting up fence.

“You betcha it is.” The man who talked did not look any different from the cowboy, except he lacked the cover of dust and grime from the trail.

“Fences.” Thaddeus’ voice was low, yet he spit out the words with an uncommon intensity. “Joshua, I never thought the day’d come when I’d see the open range fenced in.”

The man named Joshua moved uneasily and leaned against a fencepost.

“It’s the times, Thaddeus. Ain’t nothin’ we can do about it.” Joshua looked at the dusty cowboy. “You just gotta understand. Everything is a changin’. The world’s different from when we were young and rode the trails.”

“Ruined is what it is.” Thaddeus shifted where he was standing and spit in the general direction of the nearest fencepost. “See how we drop the cattle off in a two-bit town like this and the trains haul them on. Used to be we’d drive big herds. Thousands of heads of cattle. All the way to Abilene. Because that was as far west as the trains went. But that was before this.”

He threw a piece of barbed wire he had been twisting in his hand in a wide arch out into the grass.

“The range was a range then, and not just enclosures and feed lots.” He pointed west, along the road they stood next to.

The road ran nearly straight, rising and falling with the land, finally losing itself into a bluish haze that blurred the horizon. On both sides it was lined with rugged fences made from the same barbed wire he had just denounced.

“Now it’s all fenced in and a man is no more free to go where he wants than these soulless critters. Tell me Joshua, what good’s a horse to a man when he can’t go nowhere, but on roads?”

Joshua looked away, out over the pasture he was enclosing. It was big. The cattle it would hold could roam around it, finding grass here, shade there, even water down in the creek. But it was still enclosed. No need for cowboys to stay out there to keep the herd from scattering or get lost. A few men could ride out and quickly gather the cattle when needed. It was a very different game from herding cattle on the open range.

Years ago he and Thaddeus worked the range together. They were always the best of friends and he admired Thaddeus more than anyone else. Then one time in Omaha, they parted ways. Some silly argument after a long cattle drive. When they met again, things had changed. A lot.

Joshua was now a cattle rancher of the new breed. He relied on fences rather than cowboys to keep the cattle from straying. Thaddeus was still a free-ranging cowboy. He was the best and Joshua knew it, but what good was that when there would be no range left? Yet the range had to go. The land where the sky was the only boundary had to be fenced in.

The trains from the east carried the change as inevitably as summer brought heat.

“Remember how we’d sit around the fire at night, drink lousy coffee and look at the stars, while we heard the cattle shuffle about in the dark?” Thaddeus pinned his eyes on Joshua. “Remember what we used to say? Only the sky’s bigger. That’s what we used to say.”

“The plains were big then. Open. Free. You loved them as much as I. Now you’re fencin’ them in. Why did you change? What happened to the West?”

“It changed.” Joshua looked at his old friend. “Had to change. It changed while you were out on the range. The railroads came. The land became valuable. We can’t afford to let the cattle roam anymore.” He held up a roll of barbed wire. “And thanks to this, it became easy and practical to fence in the cattle.”

“But a man has his dignity.” Now Thaddeus was the uneasy one. “You may not do many things in life. But whether you live or die, you gotta do it with dignity. Take that away and a man has nothing.”

“That’s not true.” Joshua got ready to move to another fencepost. “Why, they’ll still need good ranch hands. You could even come and be my foreman tomorrow day.”

Thaddeus stood straight and looked Joshua coldly in the eyes.

“I never asked for charity and I ain’t about to now. You were once my friend, but you deserted the land. You’ve beat it down and destroyed it with your fences.“

That evening a lone man on his horse rode along the road leading west from town. He rode slowly, stopping briefly now and then to take a look at the fences on the sides of the road. Then he continued on again.

Thaddeus Jones was alone, with his horse. The other cowboys, sensing the truth of the railroad agent’s prediction, had decided to either seek jobs in town or get on the next train east. A rumor spreading even to this part of the plains had it that a new line of work for the daring and tough was opening up down Oklahoma Territory way: oil drilling.

And so Thaddeus Jones was the only one to set out for the long ride back to where they had come from, to the still-open range. He rode his horse into the sunset, until no more than a little dot on the distant road could be seen. Then the setting sun swallowed him. The grassland was waiting, with silent barbed wire outlined against the rapidly darkening sky. In the heavens the first star appeared, signifying the end of the day.