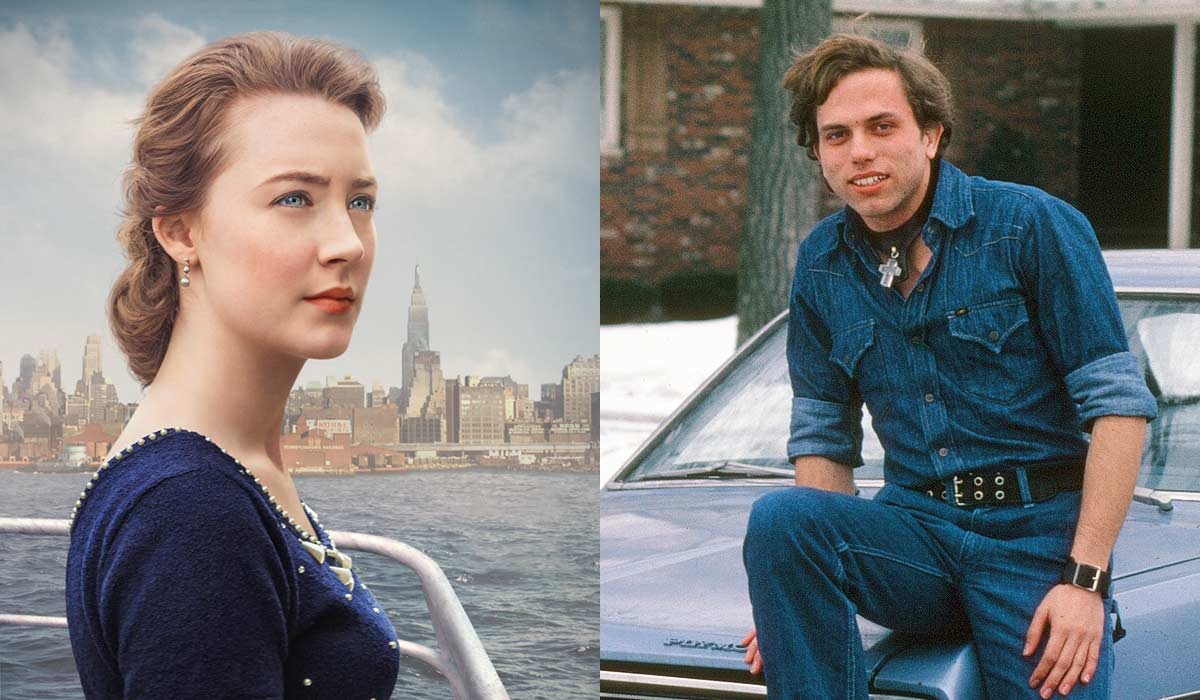 When the movie Brooklyn with Saoirse Ronan came out a few years ago, I was immediately curious. Because it was about moving from one country to another. In this case, a young woman leaving her native Ireland for Brooklyn, in the early 1950s.

Could that story have anything in common with my experiences, moving from Sweden to Iowa in the 1970s?

Once I saw the movie, I knew I needed to read the book it is based on: Brooklyn by Colm Tóibín . It was a pleasure to discover that in this case the movie closely followed the book.

This is not an action story. It is an adventure, but as much about the internal journey as the act of changing places.

At the center is a young woman, Eilis, who moves across the Atlantic and settles. The story could have ended there and been compelling enough.

But it goes deeper to also explore what happens when she returns to Ireland and has to reconcile 2 different worlds: Old country and new country.

Because in migrating, things are left behind. New experiences formed. It can feel like you are split into 2 persons: One for each country and since there’s an ocean in-between, they seem destined never to meet.

As the story begins, Eilis has just landed a part-time job in a store in Enniscorthy, Ireland. Not much of a future for a 20-ish woman. She lives with her mom and sister Rose (who has a full-time job in accounting). They have 3 brothers who’ve left for work in England and who will probably never come back to Ireland to live.

Eilis likely would not have up and left for the US on her own. Yet her sister Rose encourages her and connects her with Father Flood who makes the necessary arrangements for work and a place to live in the US.

In ways that sounds familiar. I grew up in a small town in Sweden and knew that I would have to leave there to complete my education and build a career in media production. I considered film schools in Stockholm, Sweden, and in Munich, Germany, along with US universities. In the end, the US option seemed to be the best fit for what I wanted to do.

Given that neither of my parents studied at university, it might have remained a dream. Except that I had my own “Rose” in the form of a couple American friends I’d met while train hiking around Europe. They encouraged me and provided practical help that got things going.

Moving to another country, even for a season, is a big deal and not something we embark on for a lark. Without help from others, Eilis would have remained in Ireland, getting by on a part-time job and I might have settled into the blue-collar day job I had, while trying to do some photography/film on the side.

With a little help from friends

The descriptions of Eilis’ first year in Brooklyn resonated with me. Because that first year in any new place is full of figuring out things. More so in a new culture. Some things are quite similar, but many are not.

Eilis would be forgiven for thinking that Brooklyn really isn’t that different from Enniscorthy. After all, they speak English in both places and the US and Europe are part of that nebulous “Western Culture”. Plus, she can walk down a street in Brooklyn with nobody able to see on her that she isn’t “native”.

It was the same for me. All about the little differences that take time to figure out.

Eilis’ support is from people of Irish origin who live in Brooklyn — home to a very sizable Irish population. So she could stay with “her own kind” and no doubt many immigrants from Ireland did just that.

Arriving in Iowa City, I found that there were a handful of students from Sweden among the around 20,000 students at the university. I could have clung to that little group. Instead I consciously chose to make friends with Americans. Because I figured I was in this new country for a season and wanted to get to know it and people there as well as I could.

Even with a lot of other Irish people around, Eilis connects with Americans from the melting pot. There is night school to learn accounting. And Tony, an Italian guy who shows up at the parish hall dances. For whatever reason, Tony chooses to go outside his own ethnic background and mingle with the Irish. Tony and Eilis start spending time together.

Gradually we see Eilis adjusting, breaking out of her shell from back home and finding her own place in this new world.

2 disparate worlds — or are they?

She also doesn’t tell her mom and sister back home everything. For one thing, there are things that are hard to put in letters. And how do you describe a place that superficially seems quite similar to back home, but really is a very different world?

I remember facing those same dilemmas. My parents had never traveled outside Sweden (except to neighboring Denmark) and here I was half-way around the world. So some things could be related and some maybe not so much.

I don’t think I even realized how seemingly disparate those 2 worlds were until I went back to Sweden for summer after my first year of college. I had a job to come back to and everyone I knew was excited to see me. They’d ask a few things about life in the US and then it would quickly be on to what was going on in their lives. In Sweden. In effect it was like I’d not been gone at all.

I was expected to fit right back in and be no different than before “going over there”.

For Eilis that same realization comes when she goes back to Ireland after her sister dies. There’s mourning going on. Friends to catch up with. She even gets a job since the place where her sister worked really needs someone to fill in at least for a short time. But they quickly intimate that they want her to stay more permanently.

And there’s mom who’s now all alone. She’s of course glad Eilis is back home. Where she belongs.

Back to the old country to stay?

When Eilis left for the US, it was because there was really no path forward for her in Ireland. Now, all of a sudden, there appears to be one. She has vocational skills now. There’s even the promise of a relationship now. A young man with a future. She could marry him, live in town and raise a family.

To friends and family in Enniscorthy it’s self-evident what she’ll choose: Stay. Again be one of them.

To Eilis, that choice is not so self-evident. For one thing, she got married to Tony right before leaving for Ireland. But that was before coming back to her home country and fitting right back in. In fact fitting in even better — all of a sudden having the opportunities she didn’t have there before leaving for the US.

Many would probably forgive her if she said “I’m back home and I’ll send for my things. Tony was a dream, but not real. This is real.”

You could say, opting for Ireland would be safer. That’s where her whole life has been. She could make that work. Could be in love with the guy trying to sweep her off her feet. And a job is a job.

In the US she was just getting into accounting and off the department store floor. Not like there’s a corner office waiting for her. True, Tony had laid out his vision for their future together. But that would be a gamble too. And mean diving head-first into another culture. Because Italians.

I faced that reckoning too. While in college in the US, I went back to Sweden every summer for a few months. I had a job to go back to, friends, family.

The first summer I was back, my dad passed away suddenly. When I called friends in Iowa with that news, some assumed I wouldn’t be back for the fall semester. My mom and I had long conversations. All focused on helping her adjust to life without her husband and companion of so many years.

But at no point was there any discussion that I might not go back to the US to continue my education. Mom was rather adamant on that point.

Even after that, the 2 worlds were rather separate for me. Because they didn’t directly interact or overlap.

The disparate worlds finally came together the summer that Diane from Iowa (we’d been dating for a while) came over to Sweden to experience the country and meet my family. Swedish me was no longer totally separate from the US me.

In Brooklyn, the separate worlds collide when a woman in Enniscorthy learns that Eilis, who fit right back into home country after her American adventure, is actually married back in Brooklyn. Her world comes crashing in and she responds by quickly wrapping up her stay to head back to the US.

It’s a powerful visualization of how the old place, where she used to belong, really isn’t her anymore. She will always be ‘from’ there, but she is not ‘of’ there anymore. Home, for good or bad, with all its uncertainties, lies across the water, in Brooklyn.

Different readers will have different takes on if returning to Brooklyn was the wise choice.

The book leaves her as she’s on the train to the ship. The movie closes the loop by showing her coming back to Tony in Brooklyn.

Which in turn reminds us that at some point she and Tony will have to sort out the role of her Irish heritage in the their new family. But that’s for another day.

Tóibín didn’t write a sequel to Brooklyn. There’s just a brief mention of Eilis and Tony still being in Brooklyn in Nora Webster, a novel by Tóibín set in and around Enniscorthy in the 1960s.

So we don’t know how life played out for Eilis and Tony.

Diane and I lived in Sweden for a few years after we were married and then ended up in the US for the long haul. Both cultures still a part of our lives. That small town in Sweden where I grew up will always hold a special place for me, but even the last time I was there (which is now years ago), it didn’t quite feel like home anymore. Because it’s changed, just like I’ve changed.

The journey of emigration/immigration

Brooklyn is definitely recommended watching/reading. Even if you’ve never moved to or lived in another country. You might echo my friend from college who one day observed: “You know, moving to another country, like you did — I could never do that.” There was no malice. No envy. Just an honest observation of who she was.

Years later, she and her husband adopted a child from another country. They’re making the journey while staying in their local community.

Brooklyn is a very tender and low key telling of one immigrant story. It’s fictional, but it in so many ways reflects immigration experiences shared by many people. Me included.

In the end it’s not just about the physical journey and making those adjustments, but also about an inner journey and each of us finding out who we really are and where we belong on this earth.

For more about immigration and the adjustments that go with it, check out this post: We’re all immigrants.