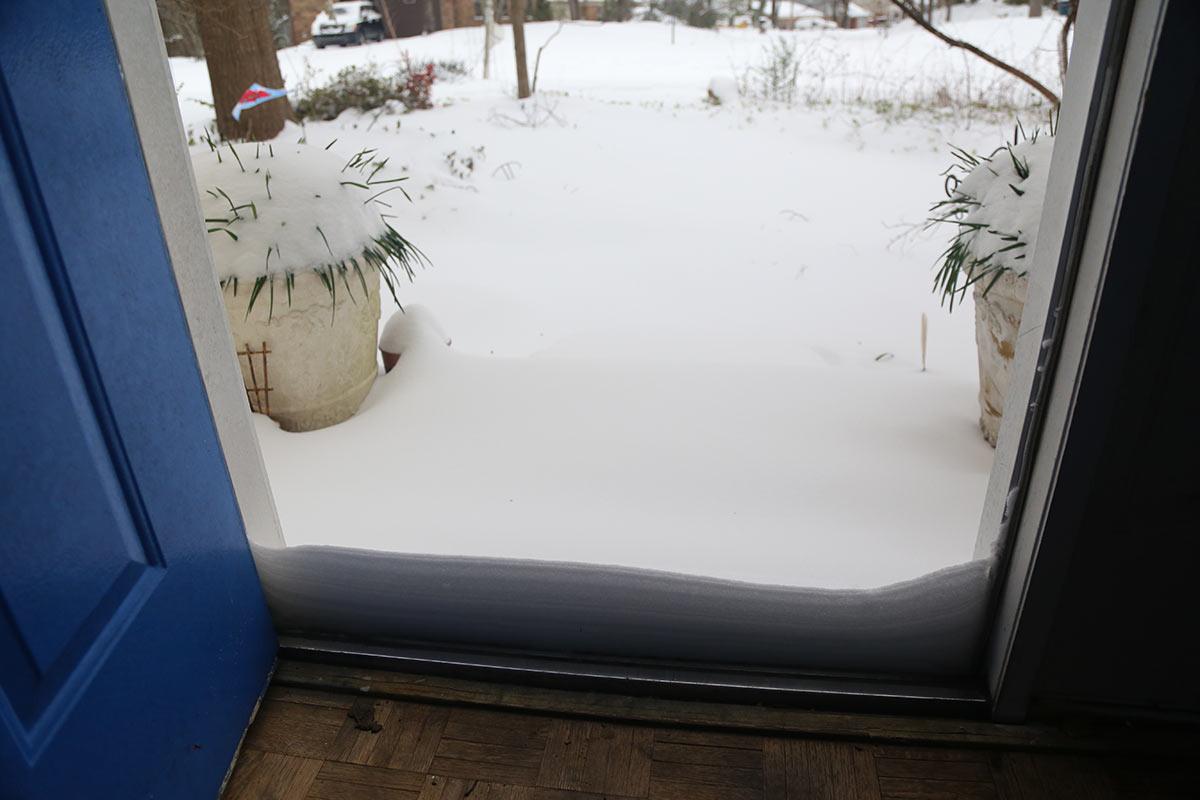 As I write this, the last snow is melting here in Little Rock. Yet a few days ago, this was a winter wonderland.

My feelings about snow and winter may be different from many other people. I actually like the winter season and I like snow. Even when that includes snow removal.

I grew up in southern Sweden. Which is a northern climate. Although somebody from central or northern Sweden wouldn’t think so. Their idea of winter is 6’ of snow and long stretches of 40 below. Or something like that.

Southern Sweden has a coastal climate. In the winter, the temperature mostly stays around freezing. With occasional blizzards. Unique is that snow there often does not fall vertically as nice, big, fluffy flakes. Rather it comes nearly horizontally, driven by wind. That results in snowdrifts wherever there is a building, hedge, fence, or cut in the land.

One year a nearby country road was blocked by snowdrifts packed so hard the snowplows had trouble making headway. Farmers who needed to get through just got creative: They detoured onto the farm field along the road. Because the snow there wasn’t very deep at all. And I guess they didn’t mind the very bumpy ride, since they got through.

As a kid, I loved the drifts, because you could dig tunnels into them. Instant snow forts.

Winter in the Midwest

Then I moved to Iowa. And experienced inland winters. My first winter there, a huge blizzard hit Chicago and everything west. I barely got my car unburied before the city snowplow came through and made me have to start all over again.

In those northern climates there’s such a thing as snow routes: Streets where parking is normally permitted, except when snow is expected. Because the city wants the snowplows to get through and really get the snow out of the street. The result is that you can easily drive down the street shortly after the snow stops falling.

The huge difference for me was that there was more sunlight in the winter. Because Iowa is farther south than Sweden, the days are longer. That made me not mind a month of below freezing weather. It was enjoyable to walk home in the cold.

A season different from the rest of the year

That’s winter as I’m used to it: Extremes of weather. Snow at least part of the time. All very beautiful in sparkling sunlight. It’s a radically different season from the rest of the year.

To be sure, there’s snow to shovel so sidewalks and driveways are cleared off and people can get in and out. You do the shoveling diligently, because if the snow gets packed, it will turn into ice and it may still be there when March rolls around.

You may stay home for a day or two as the blizzard is roaring. But then everyone quickly gets out and about again. Life doesn’t stop for the months of winter.

You go to work and school, you connect with friends. Enjoy doing things outside and also enjoy the warmth inside.

Then I moved to Arkansas. Where winter is totally different. Where snow is a rarity.

The first winter I was here, I was at work one day when snow was coming. The flakes started falling around noon and immediately everyone in the office asked the boss to let them go home early. Like right away.

Across the city, everyone seemed to have the same thought and the nearby 4 lane street quickly turned into a stop-and-go mess. Already some cars had trouble getting up even a very modest incline on that street.

Really didn’t want to be stuck in that mess, so stayed at the office for a couple hours.

When I finally drove home, the streets were covered in several inches of snow. Because no snowplows. But since no one was about, I could drive at a speed that let me actually make it up the numerous hills on the way.

Snow doesn’t happen much in Little Rock. Maybe once or twice a year. And it doesn’t last. Usually gone in a matter of days.

I since learned that the hill that leads up to where I live becomes impassable whenever we have snow. Or ice. We often get freezing rain before the snow. In which case the world is covered in ice and then snow on top.

A freezing rain that coats everything in a sheet of ice is enough to practically shut the city down. Everyone stays home and waits for it to melt. Which will happen. Not come next March, but in a matter of a few days.

This year we had a recordbreaking winter in Arkansas, and have just dug/melted out from 10 days of being stuck at home. Because of snow and a little ice.

Managing that snow and winter stuff

Since I learned to drive in the land of Vikings (Sweden, not Minnesota), I know how to drive in snow. A snowy road itself doesn’t really bother me. Especially not with front-wheel drive. Once plowed and sanded, winter roads are okay. As long as you watch for sudden ice patches. I’ve driven through major blizzards as well, where you could barely see the road.

It’s ice that’s scary. Because I’ve been there when battle tanks on an icy winter road just started sliding sideways, into the ditch. Nothing you can do when 40 tons of steel starts sliding.

A friend, who lived in Iowa for a number of years before moving to Arkansas, likened the recent snowstorm to winter up there when talking with our local friends: “In Iowa, we had weather like this all the time.”

Except not quite. Yes, 6 or 8” of snow might get dumped overnight. But, and that’s the key difference, in the morning, plows would be out to clear streets. It might be a bit late, but we’d get to work.

I don’t recall ever missing school or work because of snow. In 10 years of working at Iowa State University, they closed campus exactly 1 day because of snow. As it happened, I had a tight video editing deadline. So ended up walking in through snow drifts.

That’s the huge difference between northern and southern locations: How blizzards and cold are dealt with.

Here in Little Rock, typically most everything shuts down for the duration as soon as freezing rain starts or snow is coming. Then people stay home until it melts. Because there’s very limited snow removal capacity.

Certainly nothing like the formations of snowplows you might see on Chicago freeways where 4 or 6 plows in formation clear all the lanes in one pass.

I get that it’s a cost issue. But also a bit of a cultural issue. Here the mindset is to hunker down for a few days until it melts. Because it will melt. Shortly. And then we can go back to life as it was.

And those times of ice and snow are seen as rare events that don’t happen normally. So there’s no urgency to prepare for clearing streets or parking lots when waiting for a day or three will have nature take care of it on its own.

Even after 20+ years in Arkansas, this approach to dealing with winter weather feels foreign to me.

Living with glimpses of winter wonderland

But I still miss that when we do get snow, it’s all wintry and beautiful for only a day or two and then it melts away.

And I do find the prospect of an ice storm here unnerving in ways that it never was when I lived in the north. That’s because ice and snow here so often are followed by electrical power going out. For days even. Until the utility people can catch up and get everything repaired.

So I’ve come to an understanding with myself: I’ll enjoy the snow when we get it. Even if it’s just a little.

Because there’s just nothing like being able to go out on a cold day, walking through fresh snow, taking in what appears to be an entirely new world. Yes, it’s the same neighborhood, but it looks so different when covered in snow. Even a bare tree becomes a work of art when those branches are highlighted by a layer of snow.

Then when the snow starts melting, even as the temperature is below freezing, but the sun is shining, there’s this feeling of the world changing, right in front of your eyes. With every water drop falling.

And snow can be lots of fun. Just ask any kid with a (makeshift) sled and a hill.

I know plenty of people born in northern climates who can’t wait to move south, so they don’t have to shovel snow ever again. I guess they don’t miss the poetry of winter. Or how having gone through a long and cold winter, really, really makes you appreciate the warm winds of spring.

To me that’s the paradox inherent in winter: The world is frozen and everything seems dead. And yet, there’s life waiting to burst out. Just not quite yet.