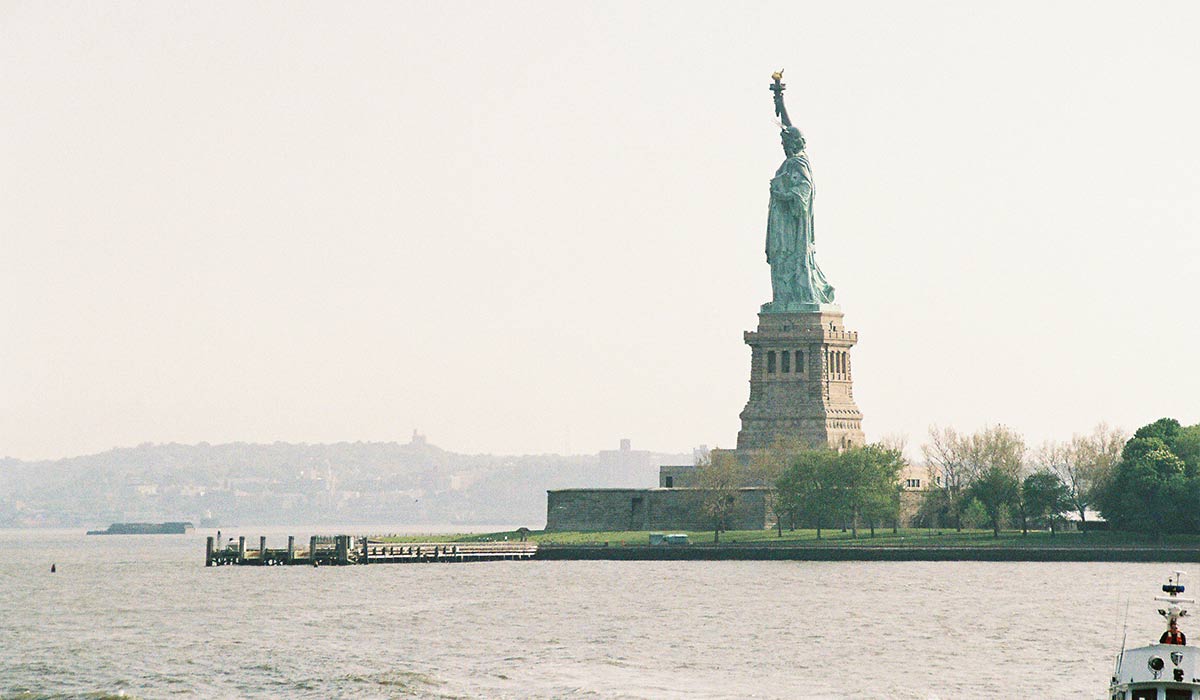 We’re born. Somewhere. A geographic location. Maybe move because our parents move. Then we grow up and set out on our own. Often that’s coupled with heading off to college. Another move.

Today it’s rare to find a person who was born, lived and died all within a 25 mile radius (excepting the occasional trip farther away). They do exist. But we are a mobile society. Moving 100s of miles away is not considered a big deal.

We may even move to another state. It’s not like you need an immigration permit to move from Arkansas to Texas (even if they claim to be “a whole other country”).

The U.S. is a country that celebrates immigrants in many ways. Folks proudly trace their ancestry to someone who came over on the Mayflower. We have heritage festivals. Irish, Scottish, Swedish or German day.

Or we proudly tell how a grandparent or great-grandparent came to this country. Often with next to nothing with them, except the desire to start fresh and build a future for themselves.

I’ve taught Swedish language and culture to Americans (including a university president) who wanted to learn more about their origins in the “olde country”. Again, they were proud of their immigrant roots and heritage.

While I personally don’t have any family tracing back to Ireland, Diane does and so do many of my best friends. And they’re proud of that heritage.

Yet 100 or 150 years ago, being an Irish immigrant or hailing from Irish immigrants was not seen as something to be proud of. They came in waves and got the backbreaking jobs nobody else wanted. They were often sent to live in tenement slums not fit for humans. But many already in the U.S. saw them as barely human anyway.

Generally they worked hard, and found or were given opportunities. Eventually became an indispensable part of American society.

Even so, many folks were less than excited when the US eventually got its first Irish Catholic President. Because that was changing the face of America. Up until then it had been solidly white, anglo-saxon, protestant. Looking back from almost 60 years later, those concerns about a Catholic president and the Pope somehow having undue control over US politics seem almost quaint.

I seriously doubt that anyone today would want to somehow boot all people of Irish (or Italian or Eastern European) ancestry out of the U.S.

“Remember, remember always, that all of us, and you and I especially, are descended from immigrants and revolutionists.”

Moving to a new place: fitting in vs. heritage

When moving to a new place, be it in the next town over, another part of the same country or in an entirely different country, half-way around the world, most of us look for 2 things:

To find a way to fit in, to connect and set down roots, to make the new place “home” — a place where we feel we just belong. And will want to go back to when we are away for a time.

To preserve our heritage. To not lose our identity or forget who we were. That sometimes takes the form of immigrants staying close together with others from the old country or culture. Often just because it’s difficult to master a new language, new ways of doing things and the very real loss of everything you were used to.

The desire/need to fit in can be very much at odds with the desire/need to preserve our heritage. For some people, it’s easier to find a balance than for others. It will also depend on how different the culture the person came from is, compared to the culture here in the U.S. And that’s not even accounting for regional differences within the U.S.

When I first came to the U.S., I consciously chose to not go the route of staying within my cultural heritage bubble. I could have. There were other Swedish and Scandinavian students at the University of Iowa. Could have spent all my time hanging out with them.

However, I wasn’t just here to study for a degree. I’d also resolved to learn as much as I could about the country and meet Americans. Yes, it helped that I already had American friends. But none of them were in Iowa City. I was still faced with making new friends in the area where I lived. I dove right in.

That’s not to say that I didn’t hold on to some ways from back home, or treated my American friends to a few Swedish holiday traditions.

There goes the neighborhood

It can seem like a big disruption and that the world is irrevocably changing when we get new neighbors from another culture. I grew up on a street in Sweden with all Swedes living on it. Very traditional. Nothing ever changed.

The oddest person there was Mr. Olsson. As a young man during WW I, he emigrated to Canada to enlist so he could fight in the Great War. Because Sweden was neutral during that conflict. Eventually he came back to Sweden, settled down, had a family, operated a business and was now retired.

Then the little old lady across the street passed away. Her house was sold to a family that had immigrated from Poland. They brought young kids to a street with mostly older, retired folks. And multiple cars in the driveway. Oh my!

The fact that their grandmother who lived with them had a number tattooed on her left arm (Concentration camp survivor) made them appear even more mysterious and foreign.

Then they renovated the house and re-landscaped the yard, cutting down bushes that had been there forever. Because little old ladies don’t cut down bushes.

It felt like our world was being invaded. Changed. True, they were decent people. But they were different and everyone could see how they changed the property.

Then Mr. Olsson died and his very Swedish son took over that property. He also set out to renovate, re-landscape and generally change the property. Taking a house that hadn’t been updated in decades into the modern age.

That also changed the neighborhood.

The lesson from all this is that change will come no matter what.

Cutting off the nose to spite the face

There is an old Swedish stand-up comedy bit where this guy is talking about how his town is being taken over by foreigners (primarily guest workers from Yugoslavia in the 1960s) and how horrible that is because they are so different.

As the comedy routine goes, he and his neighbors succeed in “cleaning up” the neighborhood and restoring things to the way they’re “supposed to be.” Except, as he notes, now his wife has to travel several miles to buy bread every day. Turns out that foreigner they successfully got rid of was the local baker.

So all the while the upstanding locals were working to get rid of this new person in the community, they were happy to buy and eat the bread he made, day in and day out.

In most debates about “natives” vs. “immigrants”, the very real contribution provided by those immigrants is grossly overlooked. The focus is only on the alleged negative impact. But we should be asking ourselves where we’d be without any new people at all. Things would get quite stagnant very quickly and life worse for everyone.

A recent study showed that immigrants and their children founded 45% of the U.S. Fortune 500 companies. With an annual revenue of $6.1 trillion in 2018.

Diversity promotes innovation. For fun, take a look at how many businesses were started by immigrants or their children. Companies like Apple, Amazon, AT&T, Walgreens, Greyhound. The list goes on and on.

“Our attitude towards immigration reflects our faith in the American ideal. We have always believed it possible for men and women who start at the bottom to rise as far as the talent and energy allow. Neither race nor place of birth should affect their chances.”

I know it sounds simplistic, but in a real sense, we’re all immigrants. It’s just a matter of how far back we look.

My family on dad’s side has 4 generations buried in the same cemetery in Sweden. That would seem like they were pretty solidly established in that area. But what about before then? And what about others in the family tree? Things quickly get more complex. There are hints that some of our ancestors might have came from Germany.

Besides, prior to 1658, that part of Sweden was Danish. When the whole region suddenly became part of Sweden, who was really the immigrant and who was the native?

Point is: Look far enough back and we’re all immigrants. So then, why do some get to brag about it (“my ancestors came over on the Mayflower”) while others are supposed to apologize for being immigrants, even after several generations in the US?

What makes us ‘not immigrants’? When we look exactly like everyone else? How we talk? Or behave? If everyone is same, that’s not a good recipe for so many reasons.

In some places, even if you’re just like everyone else, the fact that you weren’t born in that town means you’re forever the “new” person. The “outsider”. No matter how many decades you’ve lived there. A very limiting way to look at people.

We do well to welcome energy, innovation and fresh insight, whether it’s from the next town over, the next state or from across an international border.

Some generations back, we all came from somewhere else. Somewhere other than where we are now.

“Nearly all Americans have ancestors who braved the oceans – liberty-loving risk takers in search of an ideal – the largest voluntary migrations in recorded history… Immigration is not just a link to America’s past; it’s also a bridge to America’s future.”

Where do you come from? Do you live in the same area as your parents grew up in? If not, what prompted you to move?

Did your parents or grandparents live in the same area you live in?

Even Jesus was an immigrant and a refugee (his family fled to Egypt to escape persecution in Judea) (Matthew 2:14-18)

One thought on “We’re all immigrants”