When the Berlin Wall went up on August 13, 1961, I was 300 miles away in Sweden. I was 6. And had a terrible time figuring this whole thing out. They built a wall to divide a city. To keep people from crossing from one part to the other. Okay, the 6 year old me had a hard time keeping straight who the good guys were and who the bad guys were.

Did you want to be on the East or West side of it? Which was good and which was bad? And then the really mind-boggling thing: Berlin was inside East-Germany. But different. It was in East, but belonged to West. Yes, I was confused. And fascinated.

10 years later I actually stood in front of the Berlin Wall. I was there on a school exchange trip, staying with a German family, the Haumersens. They had a house in an area much like any residential area in Sweden. Except that if you walked 2 blocks over, there was the Wall. Look to the left and there were farm fields with high-rise apartment houses beyond them. But straight ahead was the Wall and look to the right, down the street, on one side it was single family homes and neat yards, on the other barbed wire and the Wall. Very strange. Seemed very dangerous, but the people living there didn’t even seem to notice it much.

Next to the road was a fence in disrepair with several rungs of barbed wire and at intervals multi-lingual signs that proclaimed “You are leaving the American Sector of Berlin”. A few feet further on was the actual Wall. 10 or 12 feet high of stacked concrete elements and topped with a round cement pipe. Nothing there to throw up and attach a grappling hook on, assuming you could even make it that far, given the death strip beyond.

From a nearby hill, the Haumersens showed me the full view of the death strip: The Wall, carefully groomed sand strip with trip wires and vehicle barriers, a patrol road and at intervals guard towers. Beyond that, a row or two of fences. Yeah, it would take some real effort to get into the death strip from the other side and then you still had to make it through and climb a concrete wall with nothing to hang onto. Before you got turned into sausage by the machine guns.

I looked at all this, knowing that this Wall totally encircled the entire western part of Berlin and concluded that this is not coming down in my lifetime. It’s too firmly established. I just couldn’t see this changing.

The Haumersens told me about recently having been able to meet some of their relatives who lived a few miles over, on the other side of the Wall, for a few brief hours. That was major progress to them.

A few years later I was back in Berlin and as I now had a pen pal on the Eastern side, I crossed into East-Berlin to meet in person. Before I went over, the Haumersens told me to be careful with what I said and did. Apparently both for my sake and for my pen pal. Spending an afternoon with my pen pal and her family, I realized that they were not much different from me. Yet, there was a bit of caution over the whole time, because you had to be careful as somebody was most likely watching. And I sure breathed easier once I walked through Checkpoint Charlie and was back in West-Berlin.

(If you want to get a good view of what life in East-Berlin and the German Democratic Republic was like, watch the movie “The Lives of Others”. It’s been praised for how accurately it portrays life inside East-Germany in the 1980s.)

In 1990, I was back on the road with the Wall next to it one early summer evening. Except the Wall wasn’t there. In its place was an overgrown area of shrubs and tall grass. I carefully followed a winding path into what used to be the death strip.

The former military in me made me watch where I stepped and stick to the path. What if there were mines hiding here still? But as I looked ahead, nobody else was worrying about mines. On the blacktop road where border patrols used to roam, this evening people of all ages were walking, playing, biking, jogging. The inaccessible death strip had become a park area where you could enjoy a nice evening.

I walked past the ruins of a toppled guard tower. Concrete elements just lying there. The Wall was gone.

Fast forward a few more years and in most places around Berlin the only trace of that mighty Wall and death strip may be a line in the pavement, if even that.

The Wall was built to “keep fascist aggression out”, although everyone knew that it was there to keep East Germans from hoofing it over to the West and freedom from the Worker’s Paradise. 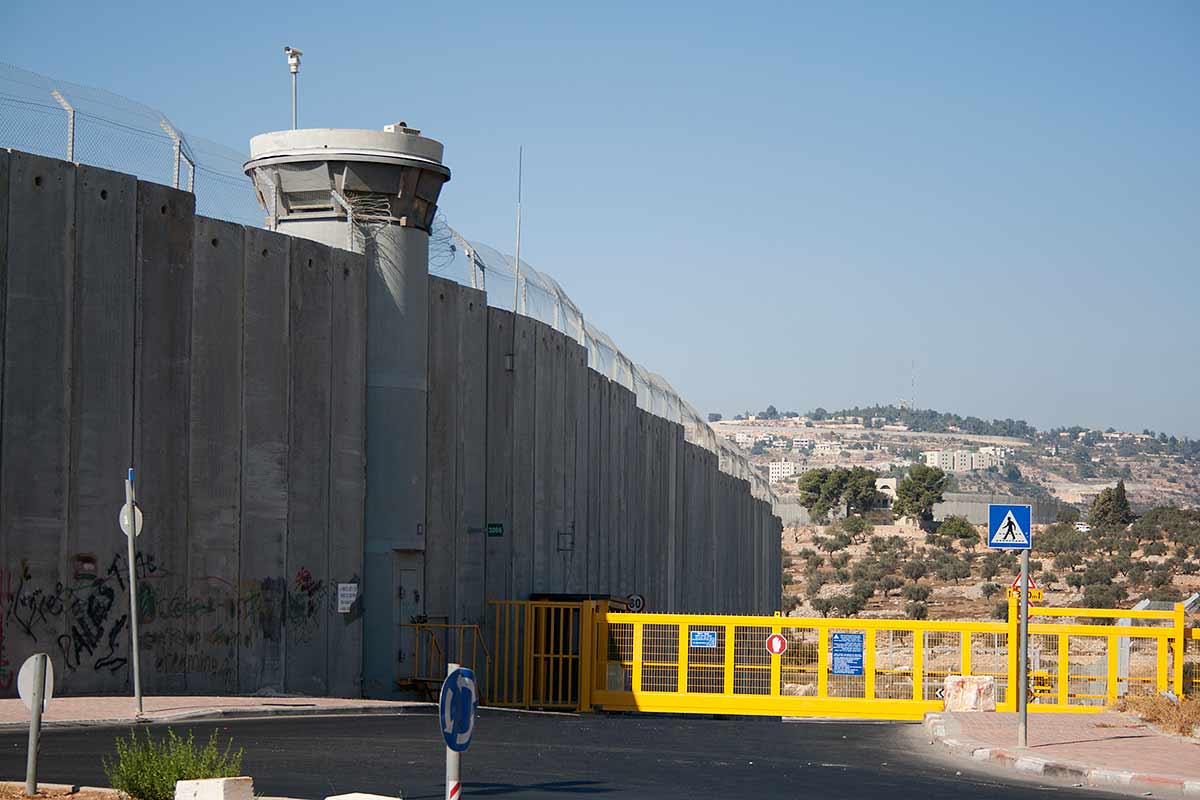 In 2008, not too long after the Second Intifada, I was in Jerusalem on an assignment and encountered the Separation Fence. It’s a stretch of walls of prefab concrete, barbed wire fencing and anything in between that very much separates Jewish held land from Palestinian land.

In the city, there’s nothing keeping you from going right up to the wall. So standing by the wall on the Jewish side, I could hear people moving on the other side and voices of children playing. It might even be possible to pass a note through one of the odd cracks between the 12-16’ tall concrete elements. 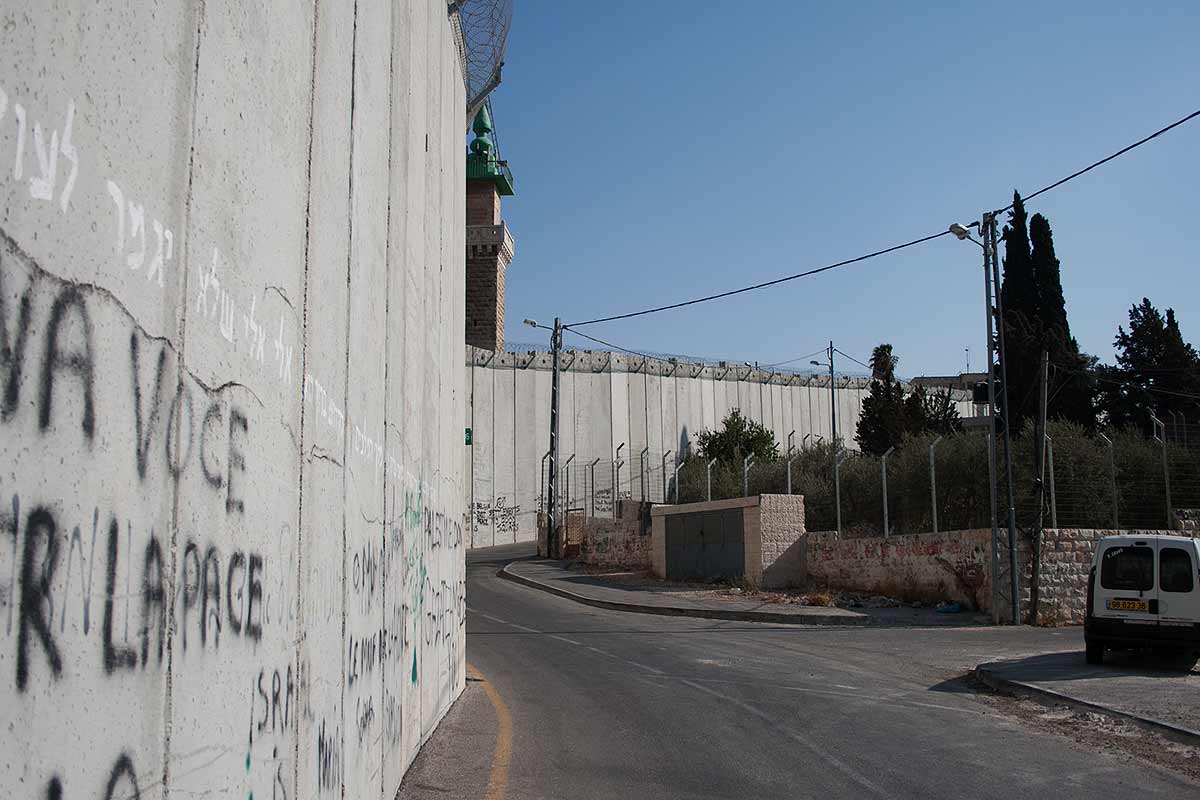 One day, the team I was part of went from Jerusalem where we were staying, to Bethlehem. There is the official checkpoint on the main road that in its efficiency had all but choked off the tourist flow into Bethlehem. Our driver (who had special permission to cross back and forth) took us out of the city on a main road, swung off on some little side road, sped through a few non-descript villages and before we knew it, we were in Bethlehem. No border checks passed.

The return trip repeated the process, except it included a quick stop at a check point where a young Israeli woman (18-20 years old) in army fatigues and with a machine gun came to check our documents before waving us on.

Our Israeli guide pointed out that once the Separation Fence was built, “the rockets stopped flying”. In his view, it made life safer, more normal.

Talking to the mayor and Christian leaders in Bethlehem (on the Palestinian side of the fence), the story was a bit different. They explained how Palestinians were being blocked off from markets, jobs and farm fields because of the barrier. There was extra hardship introduced and many who had connections in other countries were leaving, changing the population dynamics for the long term.

A Wall built to solve an immediate problem, was creating another, longer-term problem. (Yes, violence and rockets exploding are very real issues, but so are land grabs and settlements going up where they aren’t supposed to be according to the treaties.) Things might quiet down now, but you have to wonder how the presence of the Wall first frustrates and then eventually radicalizes those affected by it and may in the end unleash issues bigger than it was supposed to solve.

Growing up in southern Sweden, when I went to the harbor in Helsingborg, I could look over and see Elsinore over there, a couple miles away across the water. I was in Sweden and over there was Denmark. 2 different countries. For hundreds of years enemies, with lots of wars to prove it.

And now for many years, Scandinavian brothers and sisters. The idea of Sweden attacking Denmark (or vice versa) is ridiculous. People on both sides want a border that is easy to cross. Trade flourishes. People live on one side and work on the other. When butter is cheaper in Denmark, Swedes ride the ferry over there to get it and when coffee is cheaper in Sweden, Danes travel across to buy it there. It’s worked that way for many decades now.

Standing at the Berlin Wall in 1971, I never thought I’d live to see it come down. Yet I did. By 1989 I’d lost contact with the Haumersens. I do wonder what it was like for them to finally be able to reconnect with their relatives and once again freely move around the city of Berlin in its entirety.

The Separation Fence in Israel is still very much there and no real peace in sight for that area.

Yet history shows us that enmity can be turned into brother- and sisterhood and a border can become a point of connection and cooperation instead of an insurmountable barrier. The funny thing is, as we learn more about the people over there, we also understand ourselves better.

Reflection
What do you think prompts walls arising between groups of people (or countries)? How do we overcome barriers like that?

3 thoughts on “Walls and fences — to keep us apart”