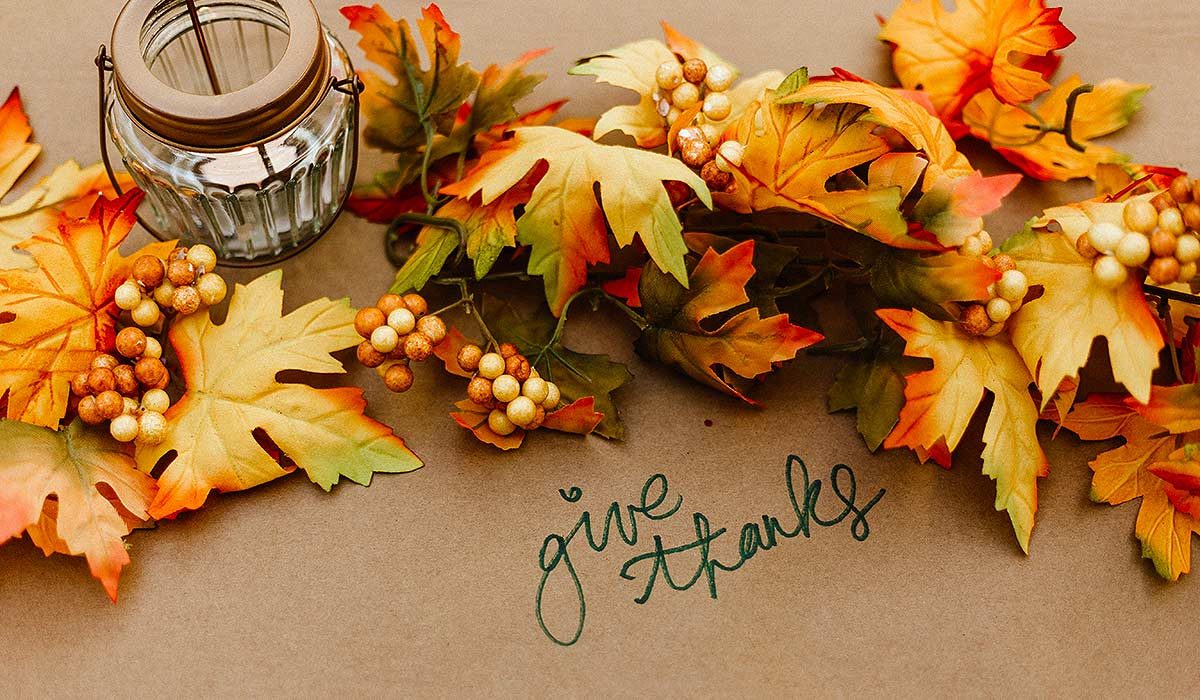 Giving thanks. Thanksgiving. I bet most of us have sat at a table at Thanksgiving, faced with the question, asked of each person in turn: “What are you thankful for?”

Then we have to come up with some profound answer. Because being thankful for the turkey and trimmings isn’t enough by itself.

Why do we often hesitate when asked to name what we’re thankful for? As in draw a complete blank.

Partly that’s because we think that it has to be something deep and complex. Being grateful to be alive or some other obvious things may seem, well, too obvious.

So we have to dig deeper for something more “worthy”.

Having gotten everybody to say (mumble) a few things they’re thankful for, we take a collective sigh of relief and move on to the real task at hand — the turkey and all the other culinary abundance.

But is giving thanks just for that one day of the year?

Don’t we have reason to be thankful for lots of things throughout the year?

Seems much of the time we approach things like Jimmy Stewart’s character in Shenandoah:

“Lord, we cleared this land. We plowed it, sowed it, and harvested. We cooked the harvest. It wouldn’t be here, we wouldn’t be eatin’ it, if we hadn’t done it all ourselves. We worked dog-bone hard for every crumb and morsel. But we thank you just the same anyway, Lord, for this food were about to eat. Amen.”

That captures how we seem to look at this “giving thanks” business much of the time: I worked hard, made it happen and I deserve it. No real need to give thanks to anybody.

We also take things for granted — having work, paychecks, housing, food, clothes, family, friends. The list goes on. We’re not all that thankful for any of it. We just expect it to be there. Would be terribly upset if it wasn’t there tomorrow. But not that grateful that it was there today.

Remembering what we’re grateful for

Several years ago I started to journal again (had done so many years ago, but stopped). The impetus was that Diane and I were experiencing many things to give thanks for in the midst of serious health issues.

One day in there, it hit me: If I don’t write this down, I will forget it. I won’t remember all the details of how we made it through this period of our lives and all the awesome, generous things that others did for us, that God did for us.

I started writing a journal again. Still do. Every day. Because there are things each day to be thankful for and I want to record and remember them.

What happens when we do give thanks?

Thanking somebody for what they did has a positive effect on the other person. I’m again and again amazed at how much more willing people are to do things when you tell them “thanks”. Sadly, I think that’s at least in part that’s because they don’t hear it nearly enough.

From my perspective, when somebody likes what I did, it just makes me want to do more for them.

Some people take the view that praise and thanks will just make others complacent and that you have to hound and micromanage people to get their best performance. For the most part, they instead get the worst, or at least average, performance. Because who really likes not being appreciated?

When I thank somebody it also has a positive effect on me. It puts me in a better mood and things just seem to go better.

Maybe there’s something contagious about giving thanks…

Certainly once I start recording things I’m grateful for, I tend to discover more things to give thanks for. Many of them things I just took for granted before. So my outlook on life changes in a positive direction.

Health benefits of giving thanks

Medical research tells us that there are health benefits to gratitude as well.

They have more empathy for others and less aggression.

And grateful persons generally get along with others better.

How do we do this ‘giving thanks’ thing?

Here are 5 things you can do today to practice gratitude:

No need to be like my uncle Sture, whose declared motto was “you shouldn’t be grateful”. Because, he’d explain, then you get complacent and won’t push for things to change or get better.

Except all it did for him was make him a complainer. And bitter.

Instead, join with me in practicing gratitude. Say “thanks”. Let others around you know you appreciate them.

They’ll love it and it will change your perspective.