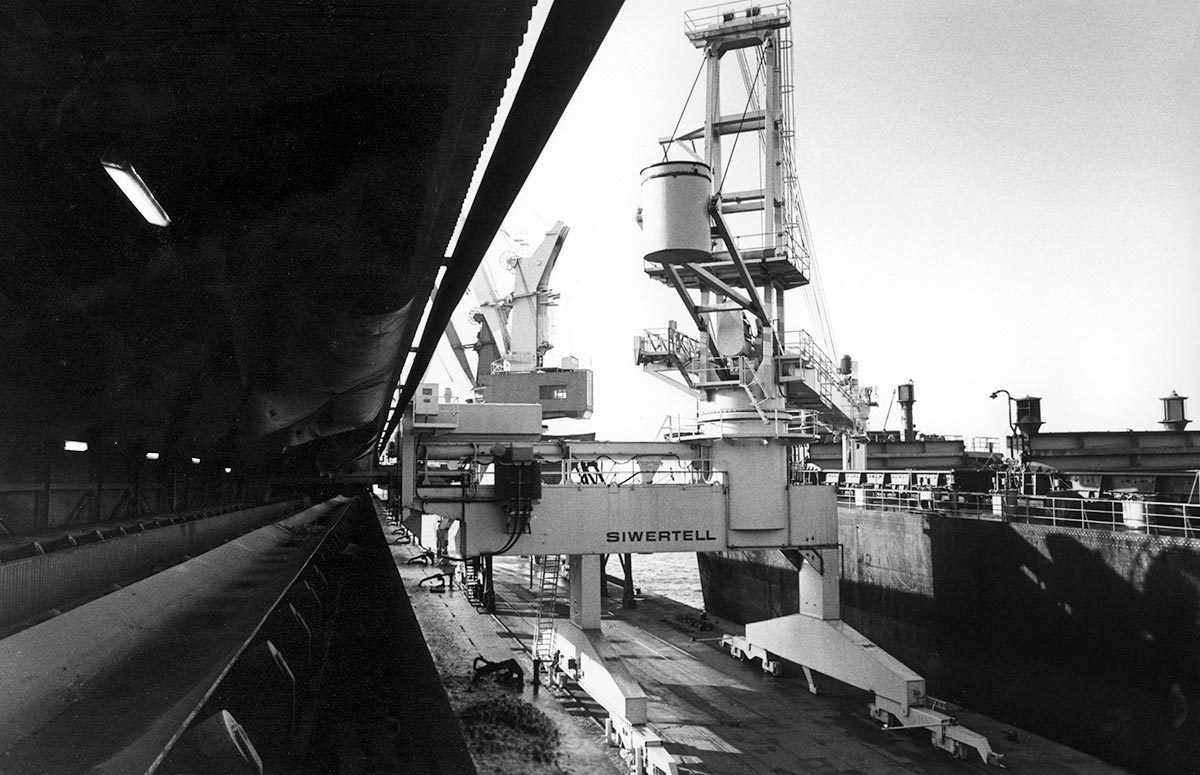 For 8 years, while I was in photography school and then college, I worked an industrial job during the summers. Right before college I even worked there through the year. It was great, because I was guaranteed my job whenever I wanted to work. So always knew what I was coming back to each summer. Plus it was good money. Especially with overtime.

The team I was part of managed a couple miles of conveyor belts that transported raw bulk materials that came in on ships to the docks up to huge storage silos and then from there out to the various places in the factory for production. Eventually our conveyor belts also handled finished product going to bagging or bulk delivery silos. I worked in a commercial fertilizer factory.

The job was quite varied. If a ship was unloading, we worked shifts around the clock until unloading was finished and everything better run smoothly, as there was no room for error. A simple little hiccup on a conveyor belt somewhere could literally put 10 tons of bulk material on the ground in minutes. At which point, we had to do whatever needed to get the conveyor going again, because the cranes at the dock were waiting. Then clean up the mess with lots of shoveling. Plenty of good exercise included.

Our team was quite varied too. We had all ages represented, from 20-something to around 60. A couple Danes on the team, one of them with a really thick accent from the far side of Denmark that nobody could really understand. The rest of us Swedes. Our team boss was also our union rep. And we had a foreman who mostly hung out in his office or visited other departments.

You could have made a TV sitcom about this ragtag bunch.

Into this came a new face one day: Hansson. He was from somewhere up north in Sweden. He knew everything better than the rest of us. And let us know it.

He moved into the break room and claimed a corner from where he could keep an eye on everything, including the neighboring control room where the big control panels for the conveyor belts were. If I wanted to be king of the hill and control everything, that’s the corner I’d pick. Not that I cared. Hansson did.

I can’t even recall his first name. Everyone always just called him Hansson. I think that was his way of making sure we didn’t get too chummy.

Hansson had opinions. About everything. Which he let the world know. Because he was always right. Didn’t take long for people to decide they didn’t want to work with him that bad.

When a ship was in, we divided into 2-man teams and went around the clock in 3 8-hour shifts or in 2 12-hour shifts. Lots of good overtime pay that way.

Being paired with Hansson meant working the whole time. Because he didn’t like to do that physical stuff. So the other person got to walk the conveyor belts while Hansson stayed in the control room. One person was supposed to be there at all times, in case of emergency. Because it was the control room. With the emergency stop button.

Teamed with someone else, you took turns. Over the night shift, you might even be able to sleep for a good while if all went well. With Hansson, not a chance.

So far that’s all just annoying. We got it: Hansson wanted to have the team boss’ job. Or be foreman. I think he really envisioned himself as department head one of these days.

But I mentioned that Hansson was full of opinions. Sometimes I don’t think he deeply cared about what he said, as long as he got a rise out of others.

Sure, there were conflicts among the rest of us on the team. They could get animated. And loud. But we always settled. Then life went on.

The port authority had a big construction project on the docks and lots of lumber that had been used for concrete forms was piled up in an empty lot. We figured it would eventually disappear, absconded for private home improvement projects. Our team boss spent a bunch of time in there sorting out the best pieces.

Hansson wanted the lumber because he was Hansson.

In the end our crafty Dane went and actually talked to the construction foreman (which neither the team boss or Hansson had done) and got the okay to take the lumber if he removed it right away. He and I worked hard to fill up his trailer and he hauled it to his farm to build houses for his geese.

Our team boss, who’d spent all that time sorting the lumber, wasn’t happy, but got over it. Especially as he still got some lumber for his project.

Hansson got nothing and was upset. He took note.

At least once an argument with Hansson involved turned into brawl, involving pushing and shoving. And lots of yelling.

One particularly hot summer we pranked each other by hiding on a high perch (lots of them around) and dumping a bucket full of water on an unsuspecting team member as they walked by below. Mostly for fun.

Hansson took that to a whole new level one day when one of us had totally surprised him with a shower. He came storming into the control room and break room with a water hose at full blast. Because a bucket wouldn’t have been enough! Neve mind the fireworks we’d see if water hit those control panels full of electrical circuits and relays.

Somewhere Hansson figured out I was a Christian and started in on a long-standing theological debate, to prove how silly all religion is. I didn’t particularly bite, but just answered matter of factly. Because it was clear to me that all he wanted was to argue. And be the smart one.

Finally, he made a show out of threatening to tear up a Bible. I told him, that would be his choice. But he couldn’t tear them all up. And doing so wouldn’t change the facts of faith and God. I think he recognized he lost that debate.

Yes, Hansson was definitely a destabilizing influence on the unit.

One day, he got really mad. Who knows for what reason that time, but as so often before, he barged into the foreman’s office and told him “If I don’t get my way, I’ll quit.” Our team boss was in there too. The two of them looked at each other and told Hansson that, no, he couldn’t have his way. Hansson stormed out and stayed away from everybody else for the rest of the day.

Eventually things settled down to the old, uneasy state of being. Shortly thereafter, I went back to college for another school year.

Only when I came back the following summer did I find out the rest of the story. I noticed that Hansson was no longer there.

My workmates were very obliging and filled me in. Back in the middle of winter, one day as they all sat in the break room, the team boss walked in. Hansson had been his old, very-full-of-himself self. The team boss looked at him and said:

“So tomorrow is your last day.”

I was told the world stopped dead in its tracks for a long moment. Then Hansson picked his jaw up off the floor and demanded to know what this outrage was all about.

Our team boss explained to him that at the end of the next day, his employment at the company would be over. Finished. Ended.

In Sweden, the law is that workers have 6 months notice. Not that anyone ever gives that much notice. You want to quit, you give a few weeks’ or a month’s notice. But the law is 6 months. So on that day the previous summer, when Hansson, like so many times before, marched in to the foreman and told him “I quit”, the foreman and the team boss decided enough was enough. They filled out paperwork and sent it to HR.

Things might have ended there, except, apparently Hansson hadn’t made any friends in HR either. And remember, the team boss was our union rep. So no help from there either. Basically everyone decided life would be better without Hansson. Papers were signed and filed. The clock started ticking.

6 months later, in the dead of winter, the clock struck. Time was up. Nothing more to say. Hansson was done. And left the next day.

I learned that he’d eventually managed to get a blue-collar job over at the shipyard. His plan to take over the world at our company had been thwarted and he had to start over again at a whole new company with a new team.

No idea how that went or how long he stayed at the shipyard. But a few years later, the whole shipyard shut down.

That’s the story of the man who would be top dog, pitched a fit too many and fired himself.

There are a few lessons for you and me in this story:

Finally, there’s great value in getting along and making friends. Our team running the conveyor belts was quite diverse and oddball. But we got along and helped each other, at work and in our free time. Hansson’s goal was just to take over and be top dog. Didn’t work so well for him in the end.