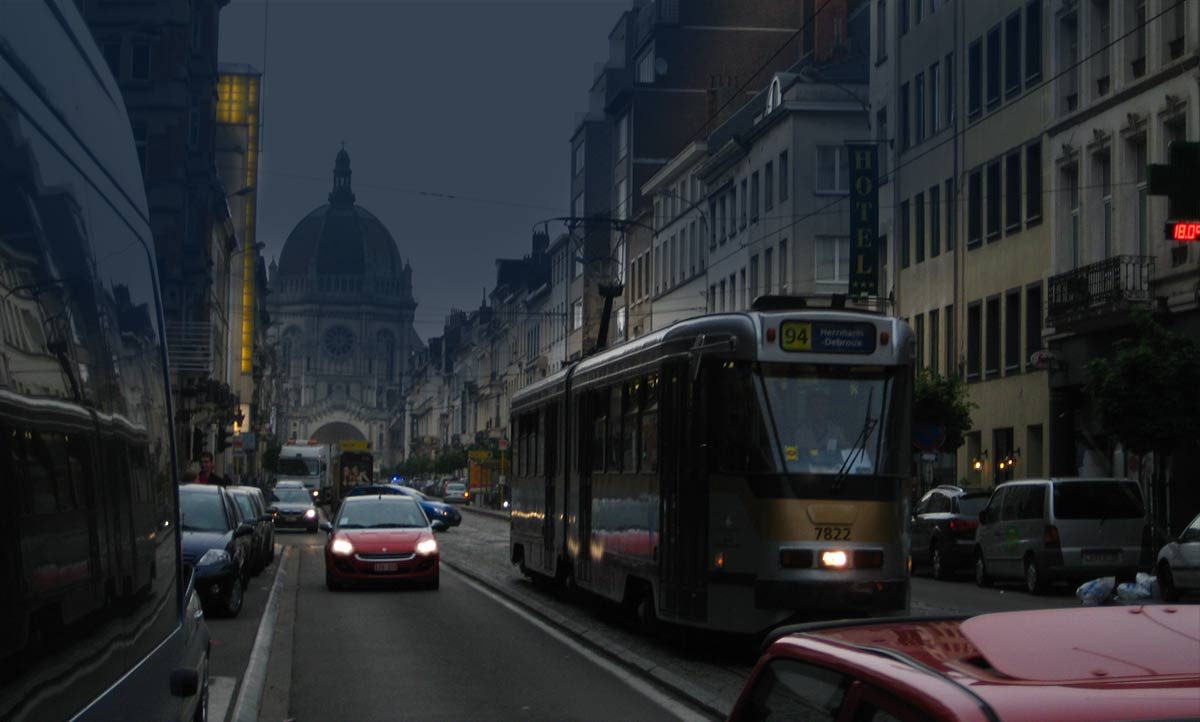 I was on a video production assignment in Europe together with video producer Rick. We were covering the European visit of the Secretary of Agriculture in Iowa, his wife and his assistant. No pressure to get things right!

Our drive went from Cologne, Germany, to Brussels, Belgium, for meetings with top European Union people and video recording there. I don’t know why it’s always at night that I find myself coming to strange cities. Okay, I’d been to Brussels before (but never driven there). It’s a charming old city that radiates out from the medieval city center, meaning lots of curving, narrow streets and anything but square blocks.

We arrived on a freeway that dumped us onto a major artery. Rick tried to be navigator for me with a not very detailed map as we tried to find the hotel for the Secretary and his entourage. That accomplished, Rick and I would find our (more economy) hotel. Sounded simple.

We passed the EU building and I knew we were close to their hotel. Just needed to get off the big street and circle back a bit. So I turned at an intersection. Bad idea. That street led to another intersection and another turn. Soon we were on another major artery, with 4 or 5 lanes going the same direction, until they all of a sudden merged down to 2 lanes, veering off in opposite directions.

We were lost. Trying to get back to where we had been, every time I turned to circle around a block, I ended up in a totally different area. You see, Brussels is not laid out on a grid. No square or rectangular blocks. Plus lots of one-way streets. It’s a labyrinth really.

Finally I happened on a street with tram tracks. That’s important, because tram tracks go somewhere. They could lead us toward downtown or they might go out into suburbs. I didn’t know which. But if I followed them, I would at least not be driving in everlasting circles.

So I did. To the point that when I caught up with a tram, I stayed behind it, even when it stopped to exchange passengers. I was not going to lose sight of those tram tracks.

After a while there was a big hotel at the side of the street. I pulled over there and Rick went inside to get directions. He came back out with a detailed map, showing where we were, where we needed to be (which wasn’t far) and most importantly, which turns to make to get from here to there.

Soon we had safely deposited the Secretary and his group at their hotel and made it over to our hotel.

It was all really easy once we got the needed help to navigate the maze of winding streets, knowing what to do at each intersection.

Life is that way — full of intersections. At each one, we have a choice about which way to go, knowing that each choice will take us in very different directions.

An intersection in life is any time that 2 or more events come together and we need to make a choice about how to go on. There are lots of them.

It’s really any time we can make a choice that affects the future direction of our lives.

Sure, where to go to eat today may not seem like a big choice, and probably isn’t, but it could be.

So many of these intersections are small choices that seem totally inconsequential. And often they are. Yet we’ll realize much later that all those little choices formed the fabric and pattern of our lives and did indeed make all the difference in who we became. We’ll also at that point realize how many wrong turns we took or where we ran in circles or checked out every rabbit hole along the way.

To some people the idea of options and change is scary.

I worked with a man, let’s call him Fred, who was facing serious financial issues. A workmate and I decided to help Fred after he’d asked us for advice a few times. We spent time with him figuring out income and expenses and got to where we had a list of changes Fred would need to make.

He knew he needed to make them or he’d continue to be in trouble. Yet he burst out: “Just leave me alone!” and stomped off. No, he wasn’t fine. But the prospect of change was overwhelmingly scary to him. So he stayed stuck.

When I was a teen, I’d visit friends at their island summer cottage. One day, somebody decided it was time for waterskiing. They asked if I wanted to try it. I hadn’t brought a swimsuit (which could have been provided). But that wasn’t the reason I choked — I was just too scared of failure to try. The idea of falling flat on my face into the water while being dragged behind a speeding boat make me sit it out.

Later I kicked myself for not giving it a try. The opportunity never came along again and to this day, I haven’t done waterskiing.

Fortunately a lot of the intersections are not irrevocable. Not that we roll back time and get a do-over. But similar opportunities appear and in the overall scheme of life, we’re no worse off. It all pans out. (I did get to do a lot of snow skiing.)

My decision not to waterski was no huge deal in the scheme of life. Fred’s decision to not get help to sort out his financial issues was a major deal and led to other issues down the line.

Some intersections in life are irrevocable. Once I make this choice, I go down a path of actions and nothing will ever be the same again. Marriage for instance is an irrevocable choice. Sure there’s divorce, but the lives of everybody involved will have been changed by the experience, even if it is ended. They now have to move forward with that new reality.

Wouldn’t it be nice if there was a grading system of events about to happen, so we’d know ahead how big of a life-chang we were about to experience? Or maybe that would just make us really paranoid.

The thing is, there isn’t. We have to proceed in faith. When I first met Adis and Debbie in Berlin, I had no idea it would be anything more than an afternoon together. Would I have reacted differently if a voice had told me that these are people you’ll know and interact with for the rest of your life? Or that meeting them will set you on a path where you’ll end up living in a place you’ve barely heard of?

Instead we make each choice in life based on the knowledge and insight we have at the time. What we can do is try to make the best and most informed decision we can and move on.

A ski instructor told his new students: “If you ski along and fall off a cliff, grab a branch on the left or the right. It doesn’t matter which — just grab something.”

In military bootcamp, the wisdom was: “In battle, make a decision and keep moving. Don’t stand still. If you do, you’re a target and you will get shot.”

Our lives are not so much shaped by the periods where everything is going smooth, with no surprises. They are shaped by the intersections, where events merge or collide, our paths cross with those of other people, and we change course, sometimes a little, sometimes radically.

At various points in life, we can look back and detect the meandering paths we’ve taken through life. In the moment, looking forward, we don’t know how today’s decision will turn out or where it will take us.

So here are a few things to consider

If past choices didn’t work out so good and I find myself at another intersection in life, it’s time to choose differently. That requires a bit of courage. I may have to dig deep to find it.

When at that intersection of life, which option is most true to who I am as a person, to my core beliefs?

Which of the choices in front of me will take me towards where I want my life to end up? Yes, some people would say that they are only living in the moment, but every moment passes and life takes us somewhere. So where do we want to end up? What are the intersections I face today that can help me get there?

The featured image is “Brussels” by neil o / CC BY 2.0. Image modified to enhance nighttime feel.

The old man and the kid