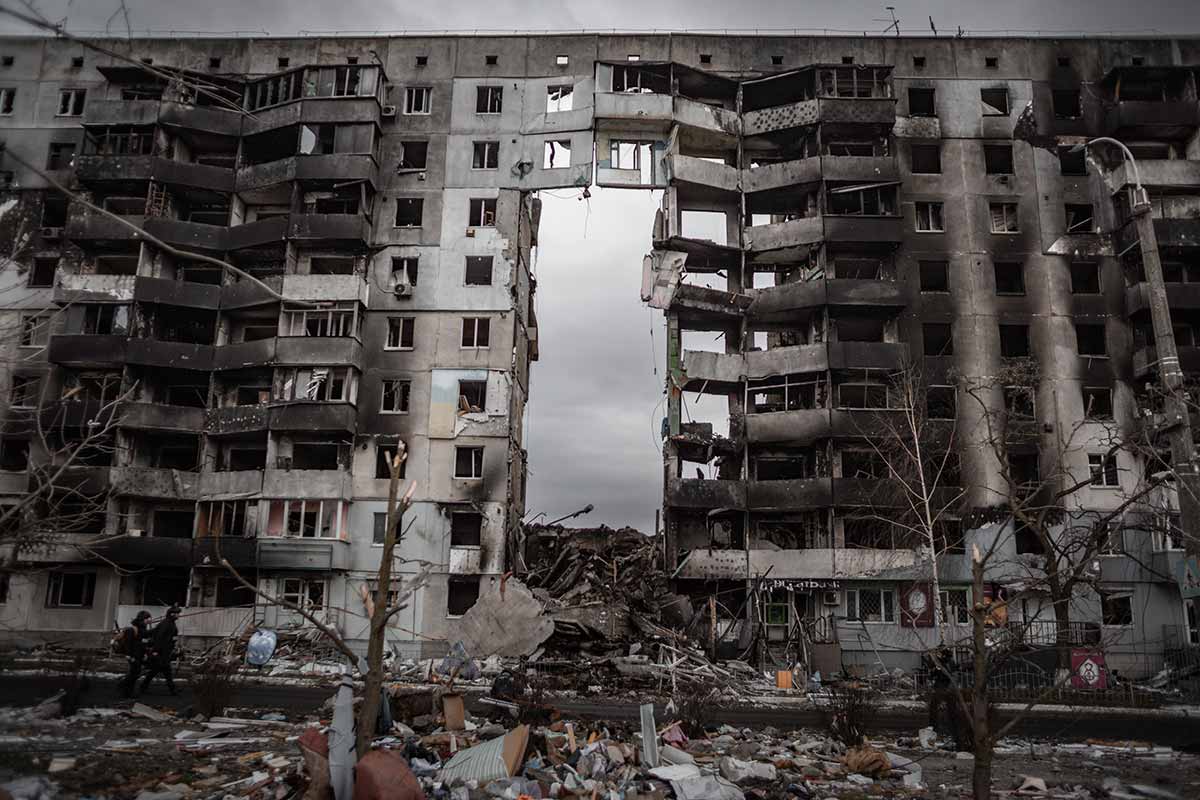 Apparently going nuclear, as in unleashing a nuclear attack on a battlefield, is back as an option. All as a result of Russia’s unprovoked war of aggression against Ukraine.

For a few decades it certainly seemed like the prospect of nuclear war was relegated to the pages of history books. The Cold War was over. A new era of East — West relations had begun. Humanity was finally making progress.

Those were the heady days around the fall of the Berlin Wall (and by extension the entire Iron Curtain), along with seismic changes in Russia as the USSR disintegrated. Hope in the air. A feeling of unbounded opportunity. Even the prospect of Russia taking its place along other European countries as a member of the European Union. It felt like East and West was coming together. Finally.

Before things got that far, SALT (Strategic Arms Limitation Talks) had aimed at curtailing the threat of suddenly unleashed mutually assured destruction by intercontinental ballistic missiles.

I grew up in a very different world. One where nuclear attack was part of the everyday threat picture. Where it was a real and valid option to unleash, or threaten the use of, nuclear weapons on a conventional battlefield.

As opposed to the Doomsday rain of intercontinental ballistic nuclear missiles launched from one superpower onto another. Which is a hail of assured mutual destruction. So terrible, the theory was, that nobody would actually dare to unleash it. Because it would be the end of human life as we knew it.

In the old days (think World War I) that situation would have led to stalemate trench warfare for years. But in the 1950s we had a great new option: tactical nuclear weapons. Just grab a few of the new-fangled glow-in-the-dark artillery shells, load a big gun and fire away. Or shoot off a missile or two. That pesky fortress gets blown into kingdom come with one mushroom cloud.

I grew up in southern Sweden with the threat of nuclear attack ever present. After all, southern Sweden was a mere 4 minutes away from certain destruction by missile launched from the nearest points in the USSR or East Block countries.

Right by the phone books stacked under the phone, was a brochure, If the War Comes sent to every household in Sweden by the Authorities. Just so we’d know what to do when the Enemy one day stood at the gates.

Sweden was strictly neutral in those days, so any potential invading force was always referred to as the Enemy — yet we understood said Enemy to likely come from the East, across the Baltic Sea. To be sure, Sweden had a long and storied history of international entanglements with arch-enemy Denmark over the centuries.

But that was ancient history by then. Swedes and Danes had concluded that hanging out together, sharing a favorite beverage, is a better approach to life than beating each other senseless.

Sweden hasn’t fought a war since losing Finland to Russia in 1809.

Yet by the early 1960s there was plenty of tension in Europe. Height of the Cold War and all.

So the Swedish Authorities decided every household needed a brochure with simple how-to steps for what to do in case of war.

The brochure also included advice such as to ‘fill the bathtub with water’ (in case of fire) and ‘shelter under a sturdy table away from windows’. Of course the very best advice was to get into a fallout shelter. One of those present in just about every apartment building.

If you lived in your own house, the basement was supposed to be your protection. Tip: Outside, pile sandbags to cover any windows of the basement.

The Berlin Wall — the height of the Cold War

When the Wall went up in Berlin, I was 6.

Remember grappling with the confusing information: Who were the good guys and who were the bad guys?

Was it East or West? And why was that city sitting somewhere in the bad guys’ territory?

Very confusing for a kid who’s growing up in a small town in the middle of gentle farmland. Where the only real reminders of the possibility of war (aside from the Brochure by the phone books), were some concrete tank barriers in the nearby city left over from World War II. Plus a concrete bunker or two in strategic locations on the coast. And of course the air raid shelter at the local train station, all overgrown with moss under a big old tree.

Despite all that helpful advice in the brochure, I think many of us (kids and adults) assumed that if the nuclear attack ever came, we’d all be obliterated. Which is not a pretty prospect. Definitely hadn’t learned to love the bomb.

Much later I served in the Swedish military. Strictly neutral. We were simply training to fight the Enemy. Wherever said Enemy came from. (Although we were reminded that helicopters could make it from East Germany in 5 hours.)

We didn’t talk much about nuclear attacks. We were training to fight a conventional war. That could drag out for weeks or months.

I was in a cavalry unit, meaning I drove a tank. One place we went for field exercises was right on the Baltic Sea. Occasionally we’d do live fire exercises. Shooting real, quite explosive shells out over the sea.

Of course an off-limits zone had been announced in advance so no ships would get hit.

So I was sitting there in the tank, looking through the gun sights out over the endless waves toward the horizon. And there were boats out there. Far out there. Just beyond that invisible edge of the off-limits area. They looked like fishing boats. Except with antennas. Lots of antennas.

Hard to tell their nationality, because too far away to make out the flag. Although it seemed the flags were rather red. Let’s just say, it wasn’t Elvis sitting out there in those “fishing boats” listening to our radio traffic, studying how far our tanks could shoot projectiles out over the water.

Almost midnight on the Doomsday Clock

Of course it never actually came to nuclear attack. But the Doomsday Clock seemed perennially stuck on a minute or two before midnight.

Going nuclear was considered during the Korean War. And rejected.

The Berlin Wall went up and there was no large-scale confrontation. Just the threat of things spiraling out of hand.

The Cuba crisis got us close to the hail of missiles, but was averted. Maybe Kruschev banging his shoe on the table in the UN was as far as things would blow up.

All that time we lived with the prospect that if something, anything, goes wrong at the really wrong level, this could all blow up in minutes.

We all hoped that the leaders of the superpowers would actually pick up the red phone and call each other before unleashing a barrage to end life as we know it.

Then the Cold War ended. I chipped off pieces of the old Berlin Wall myself. I can go out, I can go in. A new era.

Sure, there were and are other parts of the world where nuclear attack is still somewhat of a threat, but thanks to SALT and political changes in Europe, the Doomsday Clock finally moved away from almost midnight.

And then, a “special operation“

Until Russia invaded Ukraine. Until Russia encountered resistance. Because who could have envisioned that a country would defend itself? Life, liberty and all that.

Inconceivable. At least to the powers that be in Kremlin. Who apparently expected to be greeted as liberators as they rolled in to depose an elected government to install their own puppets.

So faced with resistance on the battlefield, all of a sudden going nuclear is back as an option. As a threat. Not just to Ukraine.

That country by the way had plenty of nuclear missiles on its territory when the USSR broke up. They gave them all up in exchange for assurances that they wouldn’t be invaded. Signed by the Russian Federation among others.

Now that very Russian Federation is executing a massive no-knock warrant by invading the country. With blazing guns.

At the same time, Russia threatens anyone and everyone who sides with Ukraine or even thinks of bringing NATO one millimeter closer to Russian borders with assured annihilation the likes of which the world has never seen. Since the invasion of Ukraine started, both Sweden and Finland have been directly threatened in this way with “direst consequences”.

Presumably to underscore that he really means it, Putin made sure to test fire a new intercontinental ballistic missile. This one hypersonic. So that annihilation comes even quicker.

We’re back to a minute or even seconds before midnight on the Doomsday Clock. All because of an aging autocrat’s 2-year-old temper tantrum and fever-dream of lost greatness or cause.

We’re back to tactical nuclear attack being on the table. Actual threat? Or scare tactic? Clearly someone is hoping the threat will keep the world at bay while he picks off one more country on his shopping list. Which one will be next?

It’s time to push the clock away from midnight. To unequivocally make Ukraine a country too far. Ukrainians are standing in the gap. For themselves. For freedom. For self-determination. For all of us.

As we’re sitting under the table. Hoping the next thing we see won’t be that mushroom cloud and really bright light.

Here is one final word from that Swedish Brochure: Don’t look at the light.

Really don’t look at the light. Also, climbing into the fridge won’t actually save you.

2 thoughts on “Going nuclear is back on the table”