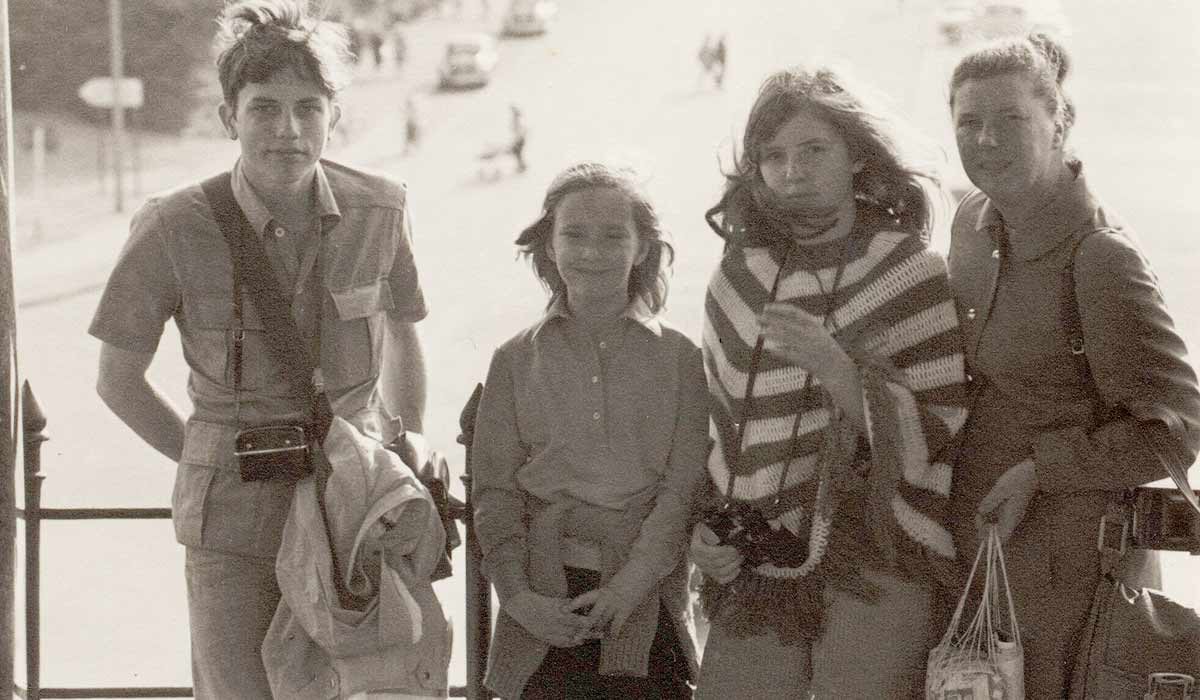 I was going on an adventure. Leaving my small hometown in Sweden (population 1,000, give or take) for the great metropolis of Berlin, Germany.

By myself. As in, I came up with the idea, I planned the trip, I made all the arrangements.

It was the early 1970s. The year before I went on my first trip abroad (when you grow up in southern Sweden, going to Denmark doesn’t quite count as “abroad”) — a school exchange trip to Berlin, Germany. One week in that totally different world. Berlin [West] was the outpost of freedom, entirely encircled by communist East Germany. The stuff of intrigue and mystery.

I was hooked. I liked the city, the people, everything. I wanted to go back. So the next summer, I made arrangements with my pen pal and her family there, agreed on dates, and the trip was on.

My parents decided it was okay for me to do the trip on my own. (Really appreciate their confidence that I’d be okay and not get into any kind of trouble.)

The plan was simple: Take the train to Berlin, spend 2 weeks with my pen pal Petra and her family, the Haumersens, there. Then travel back with them as they headed further further north for vacation, parting in Copenhagen from where I’d cross over to Sweden and home.

Perfectly simple. Nothing to it. At least not when you’re a teenager — invincible and immortal.

I started out from home one fine morning.

A local train took me to the larger train station where I changed to the international train to Berlin. Enjoyed a nice ferry ride across the Baltic Sea. Then through East German countryside towards Berlin. Communist country. The train sped through without stopping, so as not to give anyone ideas about getting on or off. Everything looked more drab and worn down than back home, where every barn was carefully painted and kept neat and tidy.

The train arrived at the big train station in East Berlin. For some, this was the end of the trip. I was going on to Berlin [West]. The procedure was annoying at best: Herd all passengers into 1 or 2 train cars, packed like sardines. Then send in the border guards with machine guns to check that no one is hiding anywhere in or under the train cars. Finally, let the little train roll across the fortified border dividing the city and dump everyone out at Bahnhof Zoo. There, journey completed.


I stood on the crowded platform, looking for a familiar face in the throng of people. Didn’t see anyone I knew.

That was odd. As the crowds thinned out, I finally went downstairs to the main hall and out on the plaza in front of the station. Still looking for a familiar face, seeing none.

I could have called my host family from a phone booth. Probably had their phone number somewhere with me. Or could have looked it up in a phone book. Not sure why I didn’t. There were plenty of phone booths around back then, and they all came with phone books in them as well.

I could have gone into the transit ticket office right there and found out what bus or subway to take from Bhf. Zoo to the Haumersen’s house, which was far south, at the edge of the city, a couple blocks from the Wall. Not sure why I didn’t do that either.

Instead I started walking down the street, still looking for something familiar. Because I’d been in this area a year ago.

Kurfürstendamm was the de facto center of Berlin [West] in those days. Lots of traffic, shops, people. Finally found a bus with a destination I recognized and got on. I love the double decker buses in Berlin. Sitting up top, at the front, gives a great view of the street below and tree branches coming at you, scraping the roof of the bus.

I watched carefully as the bus wound its way down busy streets. Looking for something I’d recognize. I knew that at some point I’d have to change to another bus to get to where I really wanted to go.

Then we pulled into a bus stop and there it was, right in front. Bus 2. That was the one I needed. So quick run downstairs, jump off the bus, run over to the #2 in front and hop on. Now I was good. This one would take me to a block from their house.

And eventually, I was at their house. Rang the doorbell. Petra was home. The rest of the family came back a little later. She explained that while they knew I was coming that day, they didn’t know the time my train came in or what train I was on. Oops. That’s why no one was at the train station to meet me.

But I’d made it to my destination.

The next 2 weeks were amazing. The Haumersens treated me just like one of their kids.

We went on outings: A cruise on the network of rivers and lakes in Berlin, visits to key cultural places and monuments, an evening at the British cultural center, going with Petra’s sister to her school, French-German cultural fest, day at the beach and swimming.

A couple relatives visited for a few days, adding to the number of young people in the household. We all did things together and had fun. Summer at the edge of a big city.

I also explored the city on my own. Berlin is a big metro area and contains many distinct eco systems within it, so I set out to visit many of them. There’ are remnants of royal and imperial Germany in palaces and monuments, quaint village life that makes you think you’ve been transported back in time, and just plain interesting city streets where you can people watch for hours and never get bored. It was just assumed that I would be okay riding buses and subways all on my own (no cell phones back then).

One day I went to an open house at the British Royal Air Force base and got to explore jet fighters and transport planes up close. Still think of that day every time I see some C-130 Hercules planes in the sky.

When July 4th rolled around, my host mom suggested I head down to the American Sector in Dahlem. That was my first celebration of Independence Day. With a military parade to boot. Tanks and big guns rolling by as the name of each state was read out with the year it joined the union, followed by a gun salute. Quite impressive.

Other days I went shopping with the family. Everyday life. I helped lay pavers in the driveway.

In the evenings we’d often sit outside on the patio, in a small backyard surrounded by tall trees, as the daylight waned. Right there you felt that the big city was a million miles away. And likewise the Wall with its guard towers and barbed wire. Even though it was only a couple blocks away.

All too soon, it was time to head home. The Haumersens packed for their vacation. They were going to the Faroe Islands for a few weeks. Seemed a bit remote to me, but also an adventure. They’d travel to Norway by train and then by boat to the islands. I journeyed with them to Copenhagen in Denmark, from where I headed for home.

One evening we boarded a train at Bhf. Zoo for the short ride over to East Berlin where we’d change to the night train to Copenhagen. Having crossed the Wall, we were at Ostbahnhof in East Berlin. Still in the city of Berlin and yet seemingly a million miles away. As we waited for the night train to leave, we couldn’t leave the platform, because that would be entering East Germany. The odd feeling of lurking danger.

This was my first time in a sleeper car. Mr. Haumersen and I shared a compartment and Mrs. Haumersen and the girls were in another. It felt very luxurious. Airs of the old Orient Express and everything.

The next day we arrived in Copenhagen and since they had some time before their next train, we explored the city. Finally a goodbye as their train took off. I headed down to the ferry to Sweden and then eventually the final train home.

My first international trip on my own was completed. It felt pretty good, except I realized I’d left a roll of posters I’d purchased and collected in Berlin behind when changing trains in East Berlin. I talked with the station master at the train station back home. He filled out some forms and sent them off, but wasn’t hopeful.

Surely the East Germans would find that they contained “decadent bourgeois material”, plus a recruiting poster for the Berlin [West] police and destroy them.

Then again, maybe not.

A week or two later, I got word that I had a package to pick up at the train station. The lost and found office of the East German Railways in Berlin had indeed located my roll of posters and sent it on. I got them back and pondered how cooperation between the state railways was flawlessly possible, but people trying to cross the Wall were shot, no questions asked.

What were my takeaways from the trip?

Most of all, having made one journey abroad on my own, I concluded that I’d like to make others. The wheels were in motion…

One thought on “My best summer”