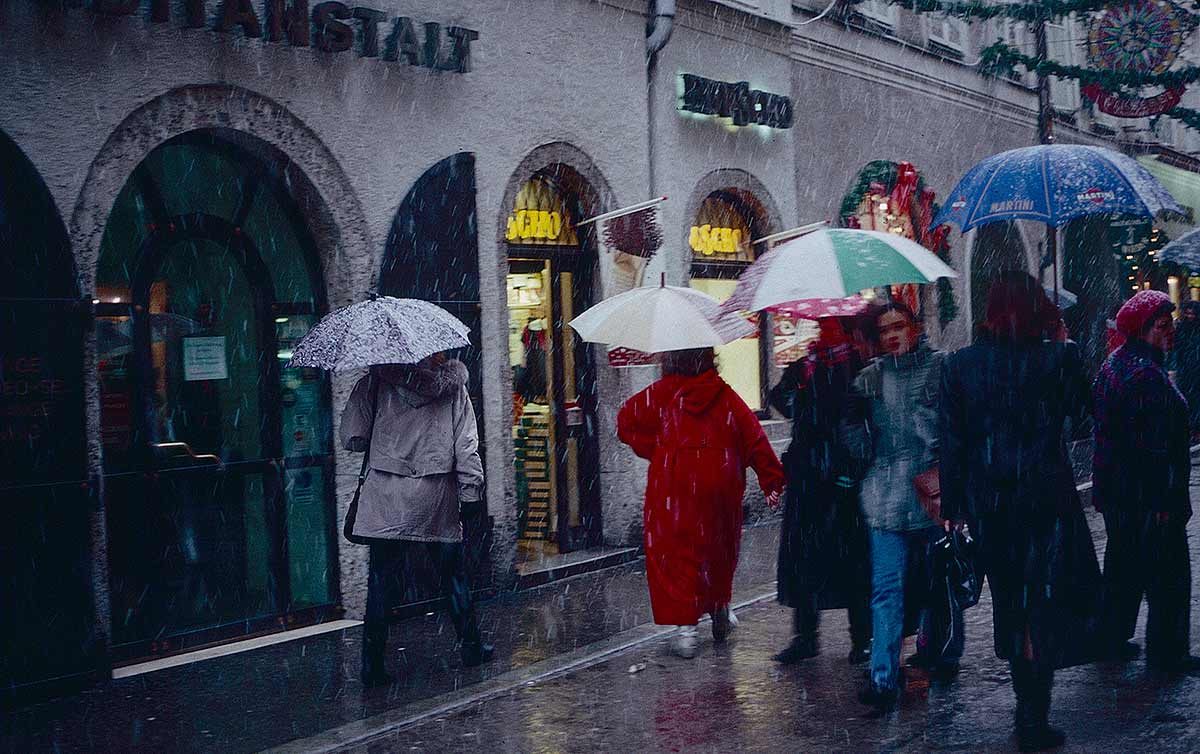 Salzburg in December isn’t anything like what you see in the Sound of Music. The day was cold, wet and gloomy. But it was the day I, Diane and Stephanie, our then 4 year old, had in the famous city. So make the best of it. We went to the sites, ambled around the old town, explored the cathedral.

By afternoon, Stephanie was worn out. Cold and tired. Declared she couldn’t take another step. And she wasn’t interested in any of the delicacies offered in various little shops. Until we came upon a McDonald’s. Because she recognized the arches. And a Happy Meal apparently does make kids happy in just about any language.

Overwhelmed by all the new surroundings, she needed something familiar. Something she recognized. That it was warm in the restaurant and we sat down for a bit also helped. Soon she was back to her old high-energy self again and ready to take on the world.

Another time I was in the UK with a group of animal husbandry specialists and some of their families. We were recording video and doing interviews for a TV series I was producing for public television.

One day we had a long video shoot at the university in Aberdeen and needed to find a place for dinner before heading to the small town where we were staying. So we’re driving along with our 2 vans. Up comes a pizza place. A chain you see all over the US. The crew in the one van decided that was where they wanted to stop. Because after a long day of work, nothing beats American chain pizza in Scotland! At least not to them. They were ready for something familiar.

Undeterred, the rest of us continued on in our van and eventually stopped at a place that proclaimed it was the New Inn (though it looked to have been there for a couple hundred years). Genuine pub atmosphere, simple local cooking — certainly can’t get that at home.

So why did some of our group go with the American pizza-chain food? Because they were tired and hungry and had had enough of cultural experience for a day.

The rest of us were just as tired and hungry, but decided that we could have pizza any time back home. But where is there a New Inn back home? Of course you take your chances. Could be a terrible place. But probably not. They seemed to have been in business for a while.

These instances bring up the different ways we travel. What I mean is how much we dive in to the local culture wherever we go. And as we dive in, when we decide we’ve had enough (at least for today).

There are folks who want everywhere they go to be just like home. The same store, restaurant and hotel chains. Because familiar is comforting. True, it makes life easier to just go to a Walgreens when you need medications, instead of having to figure out what “pharmacy” is called in the local language, then finding one, and finally dealing with how things work there and what to expect. So it’s less overwhelming to go for the known, comfortable.

Others want to more fully explore the local flavor when traveling and opt for places and experiences that are totally different from what they’d find at home. So no chain hotels or restaurants. More likely to look for anything local and end up where the folks who live in the place actually go.

I was in the Netherlands on a video shoot with a video producer friend, Roger, and a few other people. After a day of filming in Europoort Rotterdam (huge harbor), it was time to find a place for dinner. We were staying at a modern hotel on the outskirts of the city. Most of the group decided that the hotel restaurant would be perfectly fine. After all, it was right there.

Only Roger and I decided that when in Europe, then let’s find adventure. So he asked the lady at the front desk for dining recommendations. She of course mentioned the hotel restaurant and then some other places not too far away. We listened politely and then asked: “Where would you go to eat?”

Out came a map and she drew directions to a place she hadn’t mentioned before. Soon we were on our way and ended up having a wonderful dinner in converted windmill (this was in Holland after all). Mussels in beer sauce was a house specialty. But everything on the menu looked so good and nothing like back home. Score one for finding the local flavor.

While in Brussels on that same trip, Roger and I set out to find a micro brewery (he was a beer connoisseur) and ended up in a very working class part of town, far from the tourists. The bar/restaurant had maybe 5 tables covered in red/white checkered vinyl table cloths that might have been new in 1959. We were definitely the only non-regulars in the place. But the food was great. And what an experience.

Some prefer to travel where everything is organized, like group tours or cruises. Others like the challenge of putting everything together themselves and may even just drop into a new town with no lodging arrangements made.

Of course these are the ends of the spectrum: The traveler who wants everything to be just like they’re used to and the traveler who actively seeks out a very different experience. There’s a whole continuum in between. You may even be on a trip and for some parts of it be quite adventurous and on other days prefer to have that guide watching out for you.

The secret to a great travel experience? Know yourself. And then push just a little outside the box. If that goes okay, maybe push a little more.

Any good journey starts well before we leave home. Yes, the planning part. Which can be full of anticipation and almost as much fun as the trip itself. Doesn’t matter if it’s a trip half-way around the world or just to the next state over. Learning something about where we’re going, will help us more fully experience things when we get there.

Things like: Why are you going on this journey? What needs to happen on this trip for you to be convinced it was a success once back home? What do you want to take away from the trip? And how much will you allow yourself to be changed by it?

I went on a missions construction trip to Brussels with friends from church. We were there to work on converting an old building into a church for Arabs living in Brussels. So we were in a foreign country, working with international missionaries, helping an Arab speaking church. The really cross-cultural experience was eating dinner from a giant communal platter that our hosts beamingly presented. Just grab a fork (or use your fingers) and dig in!

For one of the guys, Jon, this was his first trip outside Iowa ever. It was so much fun seeing him explore the many cross-cultural nuances. Fun because he kept his Iowa levelheadedness and just soaked it in. He wasn’t going to go all “wow” and jump up and down, but he was being changed by the experience and his world grew a lot on that trip.

One thing I learned early on from traveling is that as I experience other places and cultures, I also see my “back home” with new eyes. I learn about myself and what makes me tick.

Before going on your next trip, near or far, long or short, take time to think about what you really want to get out of the trip, beyond just being able to say that you went.

Don’t be like one of the persons traveling with Roger and me, who when we were heading out of Brussels asked if that city was indeed famous for its beer. Seemed he’d heard that somewhere. (Or maybe seen the bottles of beer Roger had in the back of the van.) We told him that was indeed the case. To which he reflected that maybe he should have checked that out. Of course, we were now leaving Belgium to head to Rotterdam, where again, the folks we traveled with chose the familiar (hotel restaurant) instead of the local flavor (dinner in an old windmill).

Be intentional when traveling. Ask yourself, what’s the most important thing the place or community you’re visiting can do for you? And what can you add to that community? Because wherever we go, we leave something behind with the people we meet.

When going somewhere, we leave an impression that will reflect how people coming after us are treated, which may be good or bad. If we step out of our comfort zone and try to interact with locals we meet, we build goodwill for those coming behind us. Whenever possible, strike up a conversation with somebody local. Even a few minutes can be an eye opening experience. On both sides.

Travel can be a magical experience or it can be something we do to check off an item on the bucket list. Which is more important to you at the end of the day? And how far out of the comfort zone will you step on your next trip?