Evenings get darker earlier. The smell of smoke from fireplaces. Apple picking. Drying apples for eating later during the winter. Pumpkin patches and hay rides. Long walks on days that are cooler, with a carpet of yellow and red leaves swishing around the feet. Deep blue skies. The occasional day that warms up really nicely for Indian Summer.

Foggy days when the entire world is suddenly only 50’ in each direction. Everything very still and damp. Sounds become scarce.

A time to gather and collect, store up for times ahead. Reap the fruits of long months of labor.

I’m talking about Fall or Autumn, the season that roughly covers the months of September, October and November in the Northern Hemisphere.

The word Autumn traces back through Latin to the ancient Etruscan autu- that has connotations of the passing of the year. In Germanic languages, the word for this season of the year is connected with harvest (German Herbst and Swedish höst). The term “fall” for the season appears derived from phrases like “fall of the leaf”.

Spring is planting and anticipation, trees budding and flowers blooming.

Summer is deep, lush greenery, leisure, long days and a season many people want to be in forever.

Winter is the season when days are short, everything is dark and cold and trees are bare.

But Autumn is a rich time when the world yields its fruit, not just for our enjoyment right now, but to store for coming months, ensuring our survival through seasons with no harvest ahead.

I grew up at the edge of town in a farming community in Sweden. My parents both came from farms. So the plant-grow-harvest cycle of farm life is part of my DNA.

At that point, the harvest was over, storage barns full and there was plenty to eat and enjoy. Think of it as a Swedish version of Thanksgiving Day. Except with goose instead of turkey. And no football.

The idea is the same though: We worked long and hard to grow and produce all this bounty and now we’re going to enjoy it and be thankful for another harvest. 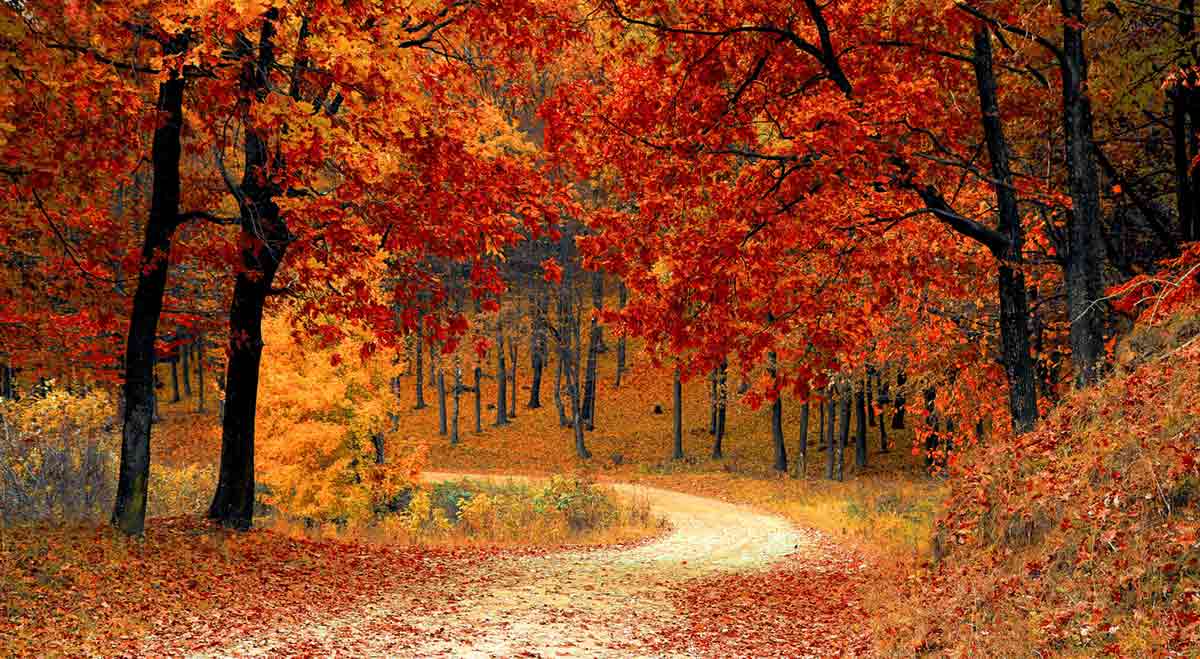 But back to Autumn and why it’s my favorite season of the year. It has everything to do with seeing the results of long labor. There is so much of life where we work hard to build up and get things in place and then along come the moments where we get to see mission accomplished. There’s a reward in Autumn that’s missing in other seasons of the year. A sense of completion and fulfillment. Even contentment.

I do like long walks in Autumn when the world is ablaze with color, all shades of yellows, reds, and browns. The air feels fresh, often with a hint of cool in it and it all makes me see possibilities ahead. Because even as the leaves fall, there are other things starting for next season.

Winter wheat and rye is planted, fields are being prepared for next season’s growing (but first a rest over the winter to gather energy for all the growing to come).

Other days in Autumn are cloudy or foggy and the world shrinks. It’s like a wrapping put over a world that is increasingly bare. Day by day, more leaves are gone. Fog and mist covers the nakedness of the trees. That’s time for reflection, for looking inward and seeing if all is well with my soul. It’s time to mature and find what we are really made of.

Sometimes we talk about life as having seasons. There’s the Spring of youth, growing and learning, Summer is the middle of life, family, career, child rearing. Autumn is when we are a bit older. The kids have flown the coop. There may be grandkids. We have established careers and for some the excitement of building that career is long gone. I think the old “mid-life crisis” fits in here, considering 60 is the new 40.

For many it’s a time to reevaluate their career or start a second career. It’s a time when many of us have more capacity to give back to others around us of time, money and maybe most importantly, life-wisdom. Let’s face it, when you’re 50 or 60, you’ve seen a thing or two come and go in this world and have experience that no 20-something will have for another 30-40 years. That’s incredibly valuable.

Maybe responsibilities and the need to provide for a growing family kept us from going for broke on some goals we had earlier in life. Now might be the perfect time to do so. Or to fall in love with a spouse of many years all over again when there are no dirty diapers and no kids to ferry around to all kinds of school and after school activities.

Many men and women reach their greatest accomplishments in the Autumn of their lives. As if everything up to that point in life was merely a precursor and they were being prepared for such a time as this:

That only goes to show that life is full of possibility, at any age. And that the autumn of life may be a perfect time for us to pursue what will become our greatest work and legacy.

For some people autumn (the physical during the year, as well as the period in our life span) is however all about decline. They just see Winter ahead, full of coming darkness. Truly though, nothing lasts forever. In the physical world we can try to move to a place with no seasons, where it’s summer or summer-like all year long. Still doesn’t change the fact that time goes on. I enjoy 4 distinct seasons in the year. The changes are good as are the different focuses of each season and the fact that there are different seasons makes me appreciate each all the more.

And that brings me back to a day in autumn when I can walk through that carpet of leaves of all colors, marveling at the spectacle nature puts on for us. There is a comfort in seeing all that has been accomplished during the year and knowing that because of that, we’re in good shape for dealing with things that lie ahead.

Reflection:
What is your favorite season of the year? What is it that you like about it?
What season in life are you in? What can you do to make the most of that season with the resources you’ve been given?